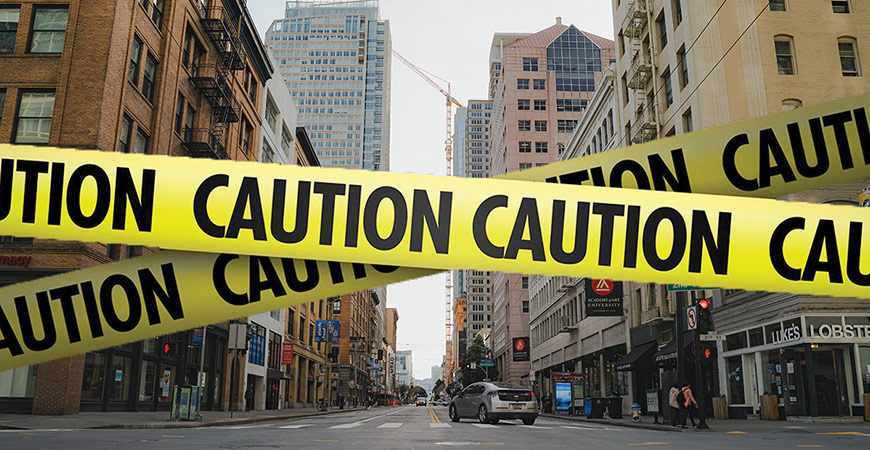 Although initial reports indicate that the Bay Area’s early action may be working to help stop the spread of the COVID-19 virus, the measures have taken their toll on the economy, with many in the Building Trades hit especially hard.

“The number one concern of the SFBCTC is the health and safety of our members,” said Tim Paulson, San Francisco Building and Construction Trades Council Secretary-Treasurer. “This is the overlaying issue and we’re taking it very seriously. We won’t be forcing members into unsafe working environments. We’re going to have to deal with the economic ramifications of this, but we’re not going to tell people that they have to go to work.”

The global pandemic has been a fluid, and at times, a rapidly-evolving situation with cases in many cities skyrocketing during late March and early April, and government agencies updating social distancing orders. On April 1, the death toll from the novel coronavirus surged above 4,000 cases in the U. S. eclipsing the number of deaths from the September 11, 2001 terrorist attacks.

“This isn’t like a flood or fire. This is a pandemic and it’s a different type of disaster with its own timeline and issues,” Paulson said. “There are a lot of new things we haven’t seen before. Responding to crisis situations isn’t new for the Building Trades, but this crisis is new. There are many more concerns coming up than did with 9/11.”

“This is worse than any crisis our generation has ever seen. This is a scary thing,” added Larry Mazzola, Jr., SFBCTC president. “This is such a unique situation, and all unions are trying to protect their members right now. It’s hard.”

Many construction projects have been shuttered. Some of these closures are due to changing definitions from San Francisco and state leaders about which construction jobs are deemed essential. In other instances, contractors have opted to halt work for safety reasons. If a family member of a worker tests positive for the virus, then the worker might have potentially spread the virus to everyone at a given job site.

“The issue is being dealt with on a project-by-project basis,” Paulson said. “All trades are monitoring their job sites in every way they can.”

For “essential projects” that are moving forward, extensive measures are being taken under the guidance of contractors and unions to keep everyone healthy. These include maintaining six feet of distance between workers, wearing personal protective equipment and supplying sites with hand wash stations, sanitizer and cleaning supplies. According to Vince Courtney, assistant business manager for the Northern California District Council of Laborers, strict attention to safety protocols are just part of the daily routine for skilled building trades workers. Many trades are also following the advice of federal, state and local government officials regarding which specific precautions they should take.

“The last ten years, we’ve seen an increase in PPE requirements,” said John Doherty, IBEW Local 6 business manager. “Many of our contractors already require our members to do task assessments to figure out if there are any hazards. Oddly enough, this is the type of training that lends itself to what we’re doing now. Some of the bigger shops have elaborate systems of rotating PPE and washing helmets. Others aren’t as sophisticated.”

While all trades are impacted by social distancing requirements, there are situations with nuances. For example, some emergency jobs enlisting the skills of Local 8 elevator constructors may pose situations in tight elevator shafts that make it difficult for workers to keep the minimum six feet of distance between each other. Conversely, trades like the Sprinkler Fitters who work in more open areas, can more easily keep adequate distance. Regardless, many jobs employing crews of Sprinkler Fitters Local 483 members have closed.

“Some of our members have senior citizens living at home with them or they have kids,” said Tony Rodriguez, Local 483 business agent. “A lot of them have said that they don’t feel comfortable going to work. They’d much rather collect unemployment and wait until it’s safe to go back to work.”

Rodriguez said that he’s spoken with many members who agree with the decision to shut down jobs as they see the number of cases and deaths from COVID-19 escalate. He said health benefits will last for four months for most members followed by an extension option with scaled back coverage for about $275 per month for a family. Local 483 union meetings are still being held via Skype, and apprentices have access to online coursework.

Despite some agreement about the necessity of the job closures where appropriate, the situation has placed many members in tight financial situations. Many of these members were not prepared to go from having steady work to having no work at all, but they still have to provide for their families. Union leadership has shifted into high gear fielding calls and emails from worried members while disseminating the latest information online. Many have steered members to apply for unemployment and to wait for stimulus checks from the federal government. Most union leaders are themselves working from home with a few essential staff rotating stints at the halls

“Members are hopeful about the unemployment benefits and stimulus package,” said Courtney. “Union officials are assisting with filling out the unemployment paper work. A lot of emergency newsletters and bulletins have gone out to membership from all of the local unions in Northern California. Every single day, something new is being done by leadership, and the administration is carrying it out.”

As of early April, there were no reports of COVID-19 being widely spread through Bay Area construction sites. A handful of incidents of workers testing positive for the illness within the region were dealt with swiftly and an abundance of further precautions have been taken for any emergency or essential work going forward.

“This disruption is going to go on a lot longer than people think,” added Doherty. “We’re going to be dealing with the virus through the winter, and so even when we do get back to work, the workers are going to have to be vigilant for a lot longer than this shelter-in-place order because we don’t want to see this spike again. This is going to be our norm until we get the real all-clear signal. This could be our norm for a while.”