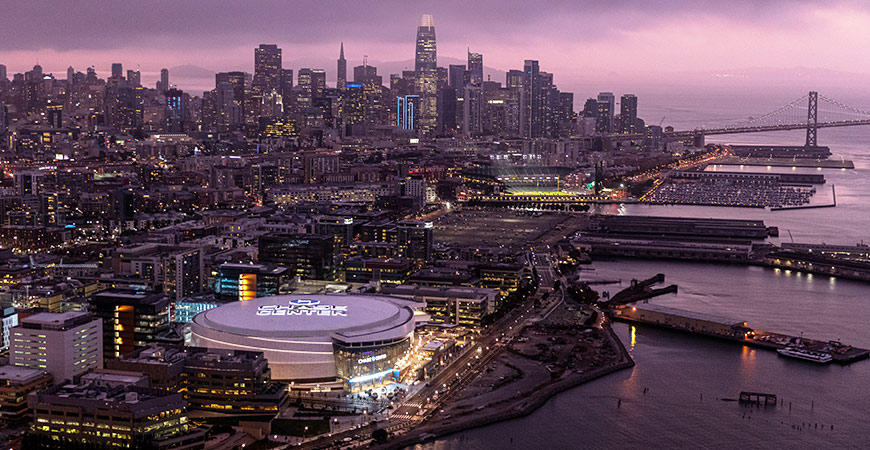 Advance technology has become more common in the trades, particularly in the construction of the $1.4 billion Chase Center.

The use of technology in the building trades is becoming more common, especially at large, complex projects like the Warriors’ Chase Center. San Francisco’s new world-class arena, developed by Clark Construction with joint venture partner Mortenson Construction, cost $1.4 billion and was completed on schedule despite extraordinary technical challenges. 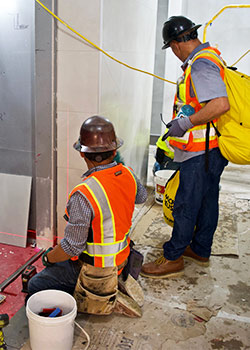 Bricklayers and tile setters from Local 3 onsite at Chase Center in 2019.

“I’ve been in this trade for 22 years and had never experienced a job like the Chase Center,” said Leon Benjamin, Operating Engineers, Local 3 Crane Foreman. “Between the size of the project, the hours and working in such small spaces, it was very challenging.”

In October, the project won the Bentley Systems’ Year in Infrastructure Award for the 4D Construction Modeling category. More recently, the project also earned distinction from Autodesk’s AEC Excellence Award in Construction for the Large Project’s Over $500 million category.

“The technology facilitated carrying the world-class vision of the owners to the high-performance pre-planning aspect of the joint venture and into the grit and determination and follow-through of the tradespeople for a state of the art facility,” said Brian Nahas, Virtual Design and Construction Manager, Mortenson.

The technology included integrating both 4D and 3D computer-aided design software to build a visual model of the entire project and detect potential problems early. The project entailed two million square feet of construction space within five structures. In addition to the 3D modeling capability, the 4D modeling software utilized time as the fourth dimension and enabled the project’s 36,000 activity schedule to be tied to the model so teams could visualize the project being built virtually.

A clash detection system harnessed the virtual model to visualize, for instance, if an electrical conduit might run into a steel beam or doorway, thereby preventing collisions. Clark has been using that system for the past decade; however, the Chase Center model was much more comprehensive and detailed than prior projects. The technology illustrated everything down to details as small as a quarter inch of pipe, and included all the structural steel, concrete and exterior skin of buildings. Jim McLamb, Senior Vice President for Clark and Director of Construction for Chase Center, said that the model was more intricate than previous projects by a factor of five.

All superintendents down to every foreman carried iPads on the jobsite, which they routinely used to track schedules and view the model to see how their work fit into the big picture. “Everyone was connected to the model,” McLamb said. Software apps were also used onsite to help track safety and 1,500 onsite workers at peak over the 31-month construction schedule.

“We leveraged technology in a massive way for this job,” said McLamb. “It also helped with safety concerns. The model told us if something was going to be built right over something else at the same time, which you can’t do, and so the model would alert us ahead of time. We had one of the best safety records in the country for a project of this size and one of the fastest records. Everyone was challenged.”

One of the project’s big challenges was being positioned adjacent to UCSF’s medical evacuation pad, which meant that cranes had to be operated mere inches below the flight path of helicopters transferring patients. Bentley Systems’ judges were reportedly very impressed by the execution of difficult crane maneuvers.

“Chase Center was a tough job because we had to have multiple cranes — tower cranes and mobile cranes in confined spaces,” explained Benjamin. “So, we came up with a system that required a lot of coordination between the crane foreman, superintendent and the company. Once the area was mapped out, everyone including the crane operators would sign off on the plan. The tower crane operator and the mobile crane operators then had to communicate through radio to avoid collisions. The computer modeling technology absolutely helped crane operation because the measurements we were given for working in any given area were always right, so we were never caught using the wrong size crane for the space.”

Josh Hurt, Sprinkler Fitters Local 483 member and Superintendent for Cosco Fire on the project, has noticed an increase in the use of tech devices over the past five years, especially on large projects such as the arena. He said that workers have a good handle on the technology they encounter in the field, which at the Chase Center included using a computer program to space hangers for hanging pipe systems.

“The apps definitely help because the necessary information is able to get to our guys in the field faster,” Hurt said. “It makes for an easier way to communicate.”

According to Derek Miles, Apprenticeship Training Instructor for Local 483 who also designs Journey-level coursework, it’s no accident that workers are adept at using technology. Every Local 483 apprentice is set-up with a MacBook Air, partly financed by the union, for students to keep for the five-year apprenticeship. Everything related to their coursework—from technical reference materials to study guides—are “air-dropped” to the laptop.

“We see the whole gamut of knowledge levels; some are already tech savvy and some older apprentices need to be brought up to speed,” explained Miles. “It helps build relationships because students help each other.”

On any given project, the general contractor chooses what CAD software modeling or apps that will be used. Once subcontractors are chosen, the general foremen and foremen will be knowledgeable about that specialized software. Once construction is complete, Sprinkler Fitters are tasked with testing and maintaining the systems. It’s an aspect of the trade that’s also been digitized in terms of submitting documents required by oversight bodies.

Overall, Benjamin thinks that new technology could end up transforming his trade. However, it’s a double-edged sword because in addition to the new modeling capabilities, the cranes themselves have more technology. According to Charley Lavery, District Representative for Local 3, this makes state-of-the-art training more important than ever. “The OE 3 Joint Apprenticeship and the IUOE training centers offer the opportunity to train on over 30 different cranes and the latest crane technologies from tower cranes to boom trucks and everything in between in addition to virtual reality simulators with full motion seat,” he explained.

Although Chase Center pushed the needle in terms of applying the latest construction technologies on a difficult project, it represents just a slice of some of the construction tech being explored in markets around the world such as exoskeleton suits, 3D printing and robotics, which could have a variety of impacts on the trades. Among other outcomes, some view construction technology as potentially enticing to young people looking for more career options.

“What brings people into the trade is the livable wage and the quality training they receive,” Miles asserted.

“There’s not a huge amount of excitement right now around building and making things,” said Nahas. “Tech will drive an evolution and push practices forward with augmented reality for digitally assisted installations for example. It will drive excitement about the crafts. The new generation will thrive on a tech-enabled workforce with robotics and automation. We will always need to build things, so with tech you can build excitement for the trades and ensure safer working environments. As long as it’s handled correctly, technology can ensure quality, which keeps morale higher.”