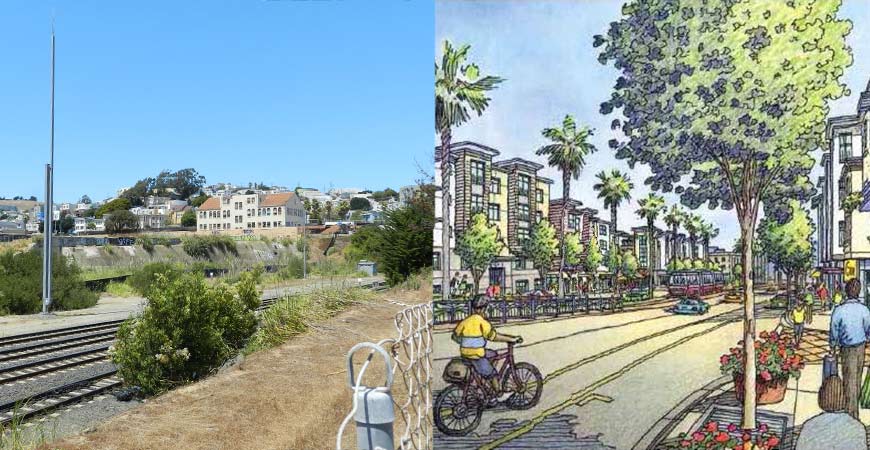 After 15 years, the promise of redeveloping the former site of the Schlage Lock Factory is one step closer to reality.

The San Francicso Board of Supervisors voted on July 22 to approve the Schlage Lock Project in Visitacion Valley. The 20-acre project site on Bayshore just north of the San Francisco/San Mateo County line was once the home of the Schlage Lock Factory and Southern Pacific Railroad Company rail yard. Adjacent to the Third Street Rail line and Caltrans, the area will be developed by Universal Paragon Corporation (UPC) and Visitacion Development LLC into a transit-oriented project with 1,679 middle-income apartments and condominiums, three parks and retail businesses.

“At long last the 20-acre Schlage Lock site, one of the largest available housing development sites in our city, will be reborn and transformed from an old rail yard and factory into a new mixed-use community in Visitacion Valley,” Lee said in a statement. “The development of the Schlage Lock site after 15 years, even after the State’s dissolution of Redevelopment, is a major milestone for this community and moves us closer to our goal of building and rehabilitating 30,000 homes by 2020.”

Supervisor Cohen also heralded the project as a “milestone.”

“This is a monumental milestone not only for the Visitacion Valley community but the entire city of San Francisco,” Supervisor Cohen said in a statement. “We need to continue fighting to keep San Francisco affordable for everyone. We must keep pushing for housing that is accessible to low and middle-income families. While we have been faced with challenges along the way, this project is a brilliant example of how the community, the City family and the developer can come together to make positive development a reality in San Francisco.”

The project has been planned, discussed, and revised for 15 years, ever since the Schlage factory closed in 1999. After Schlage shut down, a Home Depot was proposed for the site, but faced opposition from local small businesses that feared the impact the big box retailer would have.

From 2000 to 2002, City staff worked with community members to create a new vision for the vacant site, and released a Concept Plan in 2002 summarizing a community vision for the site. In 2005, the Board of Supervisors approved a mixed commercial-residential plan, which was then designated as a redevelopment area. After several years of environmental studies and community input, the project was ready for final approvals in 2012. When Gov. Brown dissolved redevelopment agencies that year, $50 million in redevelopment funding for the project was lost.

The developer will now receive about $12 million in subsidies from the city, including $2 million in Proposition K transportation funds for traffic and transit improvements. The project site is near existing buses and transit, including two stops on San Francisco Muni’s T-Third Street light rail in addition to the CalTrain Bayshore station.

The developer says the goals for the Schlage Lock site, “lead toward the kind of growth that will increase the overall quality of the community and the region – economic revitalization, transit-oriented growth, and improvements in quality of life. The community has articulated goals to create a livable, mixed-use urban community; a site design that encourages walking, biking, and the use of mass transit; and a network of well designed open spaces, public resources and amenities.”

One of the most important amenities will be a new grocery store to serve the community. According to the developer and Planning Department documents, the need for a grocery store was the number one concern of community members who participated in discussions to plan the project. UPC’s website notes, “An important component of a sustainable community is a full complement of shopping, dining, and service opportunities within walking and biking distance so that residents can minimize the need to drive to retail establishments. While shops along Leland Avenue and Bayshore Boulevard already provide for some for the residents’ basic needs, people living in Visitacion Valley frequently travel outside the neighborhood for many groceries and other services. The Proposed Project includes more than 100,000 square feet of neighborhood-serving retail development that will connect to and extend Leland Avenue across Bayshore Boulevard.”

Supervisor Cohen told Organized Labor that since a Grocery Outlet opened nearby on Bayshore, there is less urgency for a new grocer at the Schlage site, but discussions with different specialty or ethnic retailers is ongoing. Cohen said she was pleased that the community benefits for the development will include jobs for local residents. “It was critical to ensure that there is a project labor agreement in place for the construction, and workforce requirements so that jobs are provided by the retailers to people in the 94134 zip code – the Visitacion Valley neighborhood,” she said.

The development is projected to create approximately 2,800 construction jobs over the next 10 years, along with permanent jobs in the retail establishments.

The development agreement calls for infrastructure improvements and community benefits. Those include offering 15 percent of the condos and rentals at below-market-rate and the rest still within reach of low-and-middle income households, based on different percentages of average median income. Universal Paragon Corporation says its goal is to “create well-designed affordable homes for disadvantaged and working individuals, families, and seniors that add to the local supply of diverse housing types and to locate these affordable housing units in clusters around the 20-acre site so that families of various income levels can live in an integrated neighborhood.”

The Schlage Lock project is one of the pilot projects for a new Leadership in Energy and Environmental Design for Neighborhood Development (LEED ND) program for master planned developments. UPC is working with the San Francisco Department of the Environment to achieve certification at the LEED Gold level. This will include designing energy efficient buildings and using sustainable building practices – along with the emphasis on use of public transit and creating a pedestrian friendly neighborhood.

UPC has also been engaged in a multi-year environmental remediation of existing soil and ground-water pollutants on the old industrial site prior to development, with the goal of restoring the earth to above-standard conditions. In July 2013, clean soil was brought in and some grading, clearing, demolition, and soil stock piling was completed.

The San Francisco Planning Commission approved the project in June, and the Board of Supervisors signed off on July 22. A general contractor has not yet been announced, but construction could start as early as next year.