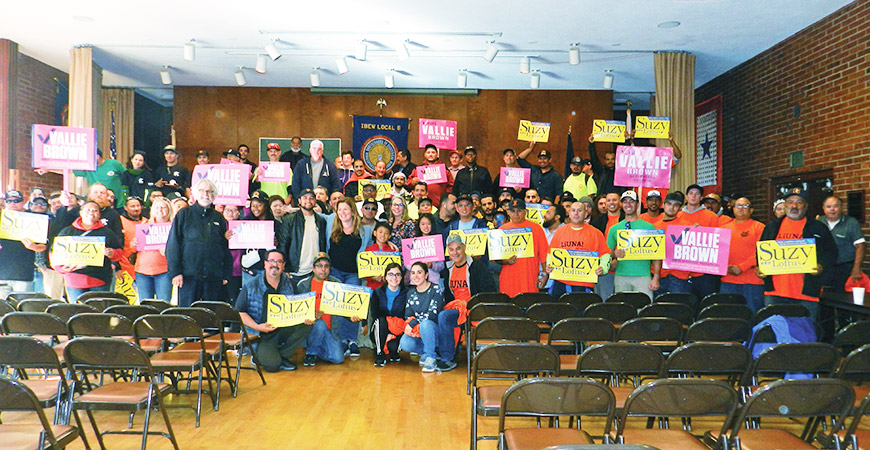 Mayor Breed Among the Candidates Earning the Council's Support

The San Francisco Building and Construction Trades Council has endorsed candidates for Mayor, Board of Supervisors District 5, District Attorney and School Board for the November 5, 2019 election. The SFBCTC also backed incumbents in several citywide races that are not contested.

Earlier this year, the SFBCTC endorsed Mayor London Breed for reelection. Breed was elected Mayor in June 2018 in a special election to serve the remainder of the term of the late Mayor Ed Lee. In the November 5 election, she will be running for her first full term in office.

“San Francisco building and construction trades workers are proud to endorse Mayor Breed for re-election,” said Larry Mazzola, Jr, President of the Building Trades Council. “She has fulfilled her promises to us by supporting rights for all workers and steering the historic Project Labor Agreement, which will guarantee the highest standards of wages, benefits and training for all San Francisco workers whether union or non-union. She deserves our support.”

Mayor Breed signed legislation in January mandating the City to enter into a citywide Project Labor Agreement with the San Francisco Building Trades Council for Public Work or improvement projects. She co-sponsored the citywide PLA legislation as a member of the Board of Supervisors, and said she would make it a priority if elected Mayor.

“In her first few months in office she was accessible, strong and committed to engaging labor issues,” said Secretary Treasurer Tim Paulson. “And it should be noted that a major legislative priority in San Francisco—guaranteeing that workers on all City projects will be protected by the terms of union labor contracts—was signed during the early part of her administration.”

Mayor Breed appointed community activist and District 5 Legislative Aide Vallie Brown to the Board of Supervisors to serve out the remainder of Breed’s term on the Board. Brown faces three challengers in her bid for a full term on the Board. As a Legislative Aide, Brown helped write and pass neighborhood preference legislation to secure affordable housing for local residents and promote affordable housing development.

At a precinct walk event hosted by the Building Trades Council September 28, Ms. Brown touted her success in dealing with housing issues and told building trades union members that it is important to elect people who can get things done and are not divisive. “Today, with major challenges around housing and homelessness impacting our city, leaders in government need to take an on-the-ground activist approach to make progress block by block,” she said. “That’s exactly what I’m doing as your Supervisor.” She said the need for affordable housing and affordable health care were issues that are personal for her. She said she grew up in Utah, a “right to work” state, where her mother had to work two jobs to support her family after her father died. She said she “vowed to fight and not back down. We need strong unions,” to help enable workers to afford to live in San Francisco.

Asked about her support for unions, Supervisor Brown told Organized Labor, “Each job we contract out is a potential loss of a union job with benefits and another blow to the middle class. The city must do everything it can to protect and restore union jobs and the stability that comes with them. Anything different adds to the widening wealth gap. The City should also work with labor to identify education and training opportunities to further the skills, experience, and certifications needed to maintain our skilled labor force. We must work closely with the building trades to strengthen the City’s workforce training programs.”

On the subject of labor rights, Brown said, “As District 5 Supervisor, I will leverage my platform and the Board to draw attention to any unfair labor practices and threats to programs that weaken and/or dilute partnerships between the City and the building trades. I will demand further inquiry and investigation into any injustice or attempt to break down those partnerships. I am committed to working with my Board colleagues to hold Department Heads accountable, and to working with the Mayor’s Office to determine expedient and meaningful solutions and resources for workers subjected to unfair practices. If a legislative solution is necessary to amend or correct a situation, I will move it forward.”

Brown said she is proud of the work she did to move forward the citywide Project Labor agreement after years of delay. “I am pleased that we were able to negotiate a deal that passed unanimously at the Board of Supervisors,” she said. “With the PLA in place the city will benefit from cost savings due to the elimination of costly delays on projects that will be streamlined under clear and concise rules for ensuring those projects are completed on time and built with union hands. There’s still work to do, and I am in for the fight moving forward to ensure the foundation established with the citywide PLA only grows stronger in the future.” Brown worked closely with the affiliates in the Building Trades Council “to make sure PLAs are the model for contracts with the City and on any city infrastructure projects. Of course, prevailing wages are important as well, but my strong preference is that all major projects, including municipal infrastructure and housing, be built under project labor agreements.”

Brown said she takes a comprehensive approach on housing issues, including protecting renters and helping to create new apartments and affordable housing. She has worked to Expand the City’s program to buy at-risk rent-controlled buildings—increasing funding by $40 million to protect tenants from eviction while preventing Ellis Act evictions and permanently preserving affordable, rent-controlled housing. She also fought to ensure that a project on Divisadero will include a higher percentage affordable housing than required by City law and developed plans to build 100 percent affordable housing on parcels that have been empty since the removal of the Central Freeway.

Her other priorities include addressing homelessness, public transportation, and pedestrian and bike safety. Ms. Brown said she is pushing for Muni to hire more drivers and pay a living wage so Muni can improve hiring and retention rates, as well as calling for investing in and growing the city’s public transportation systems and working to improve the reliability and safety of public transit.

Mayor London Breed recently appointed Suzy Loftus to replace District Attorney George Gascón, who resigned his position and is rumored to be planning to move to Los Angeles and run for District Attorney there. Loftus faces three challengers. She is a former Legal Counsel for San Francisco Sheriff Vicki Hennessy and President of the San Francisco Police Commission, where she prioritized improving the Police Department’s response to violence against women and children, expanding the use technology to solve crime, and making city streets safer. Under her leadership, the Police Commission reformed the City’s use of force policy, and instituted body-worn cameras to increase transparency and improve police-community relations.

At the Building Trades Council precinct walk kick-off September 28, Loftus told building trades members the labor movement is an essential and critical part of the city. “I want every San Franciscan to see the District Attorney as the people’s lawyer—fighting to ensure that every person, regardless of their neighborhood, country of origin, or race is protected and treated with dignity.” Loftus said. “I will go after employers who are stealing wages.” On her campaign website, she says, “I want to re-imagine the role of the prosecutor as the people’s lawyer who can protect our communities from the abuses of the most powerful. It’s not enough to pass laws that protect residents from discrimination and other unjust behavior.”

Ms. Loftus said she wants to continue strengthening the City’s commitment to “public safety strategies that actually address the root drivers of crime” rather than “relying on jails and prison as the first or only mechanism to achieve safety.” She said, “We need to continue pioneering new approaches that move away from our over-reliance on incarceration and instead prioritize rehabilitation, alternatives to incarceration, and other diversion programs that address the root causes of crime.” Loftus also pledged to “prioritize rebuilding trust with San Francisco communities—particularly communities of color and immigrant communities—and tackle the misuse of power head on.”

Mayor London Breed appointed Jenny Lam to the San Francisco Board of Education in January 2019. She serves as the Education Advisor for the mayor, where she administers and implements the mayor’s education policies and works to advance the partnership between the public school system and the City.  Mayor Breed said Lam “has fought for public school students and families at both the local and state levels and she has stood up for immigrant communities so that all are welcome in San Francisco and its schools. Both as a professional and a parent, she has demonstrated a commitment to improving our public schools and to promoting equity throughout our entire school district.”

As the former Director of Programs at Chinese for Affirmative Action, Ms. Lam expanded civil and political rights for San Francisco’s immigrant youth and families. Her priorities include supporting community schools with more access to counselors, nurses and social workers so students and families get the support they need; increasing before and after school programs; and developing a youth mentorship program for career exploration and service learning.

Three other candidates are running for the office. The winner of the November 2019 election will have to run again in November 2020, which is the normal election cycle for the four-year seat. Jenny Lam is also endorsed by United Educators of San Francisco and the San Francisco Labor Council.

“This Affordable Housing Bond will fund the rehabilitation and creation of thousands of units of affordable housing for San Franciscans, including our public housing residents, people exiting homelessness, seniors, working families, and middle-income households,” Breed said. “Whether you are a senior or veteran living on a fixed income, service worker earning less than $30,000 a year, tenant in a rent controlled building, public school teacher, or middle-income family of four earning $170,000 per year, this Affordable Housing Bond will provide critical resources to support affordable housing options for you.”

A press release from the Mayor’s office noted that funding from the Bond would finance construction of 2,000 units of affordable housing over the next four years. It would expand the pipeline for new housing projects, especially for 100 percent affordable supportive housing projects, and benefit vulnerable residents—including seniors, formerly homeless individuals, veterans and families.

SF Building Trades Council President Larry Mazzola, Jr, said, “We have met with Mayor Breed and her team, and have assurances of Labor protections in the Bond that will ensure building trades workers will be well represented on these projects. The last housing bond in 2015 was done with 98 percent union building trades workers, and the goal is that this bond will be no different.” Mazzola noted that the City agreed to include the State’s language on a “skilled and trained workforce” that ensures union apprentices will be employed on the projects.

The SFBCTC did not make recommendations for the other ballot measures. They include: