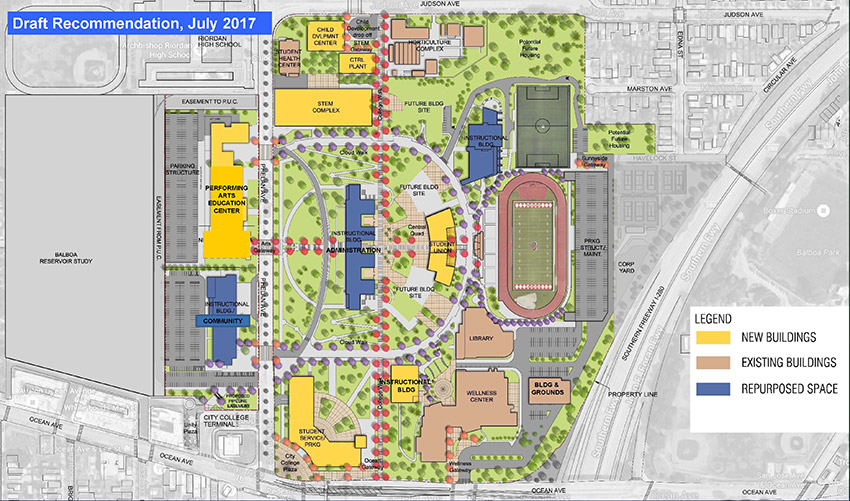 The City College of San Francisco Board of Trustees will vote in September on placing a bond measure on the March 2020 primary election ballot to fund new construction, renovations, and infrastructure improvements.

Project Labor Agreement, Trades Support of Bond to be Determined

The City College of San Francisco Board of Trustees will vote at its September 26 meeting on placing a bond measure on the March 2020 primary election ballot to fund new construction, renovations, and infrastructure improvements at some campuses and CCSF Centers throughout San Francisco. The CCSF Board of Trustees approved a recommendation by Chancellor Dr. Mark Rocha at its June 27 meeting to move forward on a facilities bond—contingent on bringing back to the Board a Project Labor Agreement for work on the bond-funded projects. Rocha said he is confident that the college and the Building Trades can reach an agreement.

“We have done this before and have a good relationship with the Building Trades Council,” Rocha said. “We have a previous PLA that we can build on and understand the issues that might need to be dealt with in the new PLA.” The CCSF Board of Trustees approved a PLA in 2005 for projects funded by a $243.6 million bond measure.

San Francisco Building and Construction Trades Council Secretary-Treasurer Tim Paulson said members of the CCSF Board of Trustees have reached out to the Council to get support for the proposed $845 million bond and to work out a Project Labor Agreement for work on the bond-funded projects. “CCSF is committed to improving their facilities and infrastructure and they are willing to work with the building trades,” Paulson said. “Hundreds of union construction workers will be building new facilities on campuses that serve a working class population in the city if the bond measure is passed.”

“This facilities bond is vital for the continued success of our students and provides critical funding to upgrade our many debilitated buildings,” said City College Board of Trustees President Alex Randolph. “I look forward to working with the Building Trades to sign a new Project Labor Agreement covering the exciting planned projects and reaffirm our strong partnership with labor.”

Dr. Rocha said the driving force for the bond was the need for “an extreme makeover of the Ocean Campus, which except for a few upgrades hasn’t been touched since the 1970s.” The lead project at the Ocean Campus will be construction of a Science, Technology, Engineering, Arts, and Math building. Along with space for STEM education, the new STEAM building will include space for arts studies. The existing Science Building that opened in 1939 and the academic instruction building, Cloud Hall, would be renovated. Other buildings at the Ocean Campus to be renovated or modernized include Batmale Hall, the Student Union, the Bookstore Annex, and the Campus Police Complex. New construction there will include a new Performing Arts and Education Center, Central Utility Plant, Student Development Center, Childcare Center, and Parking Structure.

One of the most important projects to be funded, Rocha said, is the major renovation and expansion of facilities for workforce training programs at the Evans Campus in the Bayview. “The bond will enable us to expand those programs that teach carpentry, electrical work, and other trades,” Rocha said. The Evans campus also houses the City Build Academy pre-apprenticeship program and an auto mechanic training center.

CCSF officials have been revising their Facilities Master Plan over the last five years to meet the needs of an expanding student population. The most recent plan calls for further modernization, renovation, replacement, and new construction over the next 10 years. According to CCSF reports, the plan “will provide a roadmap for facilities development in order to support the goals and strategies of the College’s Education Master Plan, the goals of which include: advancing student achievement in meeting educational goals, transforming and sustaining campus infrastructure, and providing new and expanded opportunities for organizational development and effective innovation.”

The college district is also committed to sustainability and set a goal for all new and future construction projects, major renovation projects, existing building operations and upgrades will to attain at a minimum a LEED silver rating.

A survey of students, faculty, and other CCSF staff identified several areas where improvements could be made. They include installing more site lighting, security cameras, and emergency phones for security as well as organizing more indoor and outdoor study areas for individuals or groups with outlets, WiFi, seating, shade, weather protection, and food. An updated plan for the Ocean Campus calls for creating a “heart of the campus” with a One Stop Shop, Student Development, Student Activities, Library, cafeteria, and bookstore, as well as better integration of the campus within the Balboa Park neighborhood. A CCSF report noted that enrollment at the Ocean Campus will increase by 10 percent over the next ten years; accordingly campus classrooms, labs and other areas should be expanded by 10 percent—from the current 506,600 square feet to 559,700 square feet.

CCSF has more than $450 million in deferred maintenance. A 2012 report by the State Chancellor’s Office found that “the District has many buildings that are nearing the end of their useful lives. In addition, the Planning Team has conducted a technical analysis at each location and discovered that several of the older buildings on the Ocean Campus are not readily suited to renovation to support modern instructional and support services delivery.”

In addition to the requirements of a project labor agreement, CCSF will build in opportunities for local workers by requiring contractors to hire paid interns from the local community. The college is working with community based organizations and agencies like the SF Public Utilities Commission on workforce development, internship, and business incubator programs.

If voters approve the Bond Measure next spring, the projects would be built in phases over 10 years.