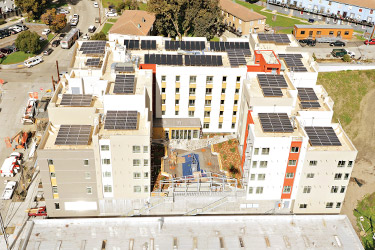 HOPE SF, known as “the nation’s first large-scale public housing revitalization project,” is underway with its first building Potrero Block X now complete utilizing 100 percent union labor. The 109,000 square foot building is located at 110 Connecticut Street and offers 71 housing units. The units are mostly two-bedrooms with one and three-bedroom units as well. The residences are all affordable with 18 for households earning between 40 and 60 percent of the Area Median Income and 53 for existing public housing residents. At full buildout, the Potrero HOPE SF master planned development will have 1,600 units with 50 percent of the units market-rate and 50 percent below-market-rate.

HOPE SF was originally conceived in 2005 as the need to revitalize the City’s distressed public housing sites that had been built after World War II was identified. BRIDGE Housing was selected as the developer of Potrero HOPE SF by the Mayor’s Office of Housing and Community Development in 2008, while Mercy Housing and Related Companies were selected to develop Sunnydale HOPE SF, which is underway parallel to the Potrero initiative. Cahill was the general contractor for Potrero Block X and Van Meter Williams Pollack the architect.

Due to concerns about gentrification that can occur with revitalization initiatives, one of the essential features of HOPE SF is the commitment to not displacing any existing public housing residents and to create a thriving community.

“We have long recognized that you can’t just build new buildings and expect everything to be perfect,” said Lyn Hikida, Vice President of Communications for BRIDGE Housing. “There’s a lot of community engagement and community building that’s an important part of creating something that’s really successful and that feels right for everyone.”

Beyond just building the streets and structures of Potrero HOPE SF, BRIDGE Housing is also implementing various types of programming for the residents. From yoga classes to Zumba and gardening, the activities are subject to change depending on the needs of the residents.

“Early on we designed services around the community’s needs,” said Marie Debor, Vice President and Director of the Potrero development for BRIDGE. “It’s going to be vital to connect the community once all the buildings are complete, so a big part of it will be the community center. We’re creating programs that serve existing and new residents.”

Potrero Block X is a five-story building with 6,320 square feet of community space and 29 off-street parking spaces on a 0.69-acre site. The project features laundry facilities on each floor and washers and dryers in the three-bedroom units. Other amenities include a multi-purpose room, bike room, community room with a kitchen, play area and will be equipped for meetings. There’s also an outdoor gathering space with two BBQ areas, play area and outdoor seating with city views. The building will contain a service provider’s office, a live-in manager occupying one of the units and security patrol. The project is aiming for LEED Platinum status and has an array of renewable energy sources including roof-top solar panels that will power the common areas of the building.

The next phase of Potrero HOPE SF is across the street from Block X, referred to as Block B, with demolition to occur later this year and completion of construction by 2021. The master planned development is expected to be delivered over the course of the next ten years. The development will offer three to four acres of open space, a community center and 15,000 square feet of retail. A transit plan associated with Potrero HOPE SF will make improvements to the nearby Muni bus lines.