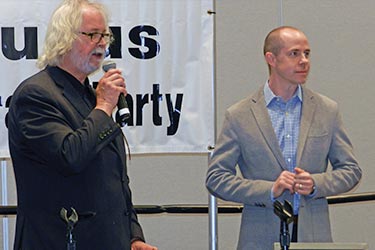 San Francisco Building and Construction Trades Council Secretary-Treasurer Tim Paulson and San Francisco Labor Council Executive Director Rudy Gonzalez welcomed delegates to the California Democratic Party’s Labor Caucus meeting at the Moscone Center May 31, reminding them that union members built the facility and do the work running conventions, trade shows and other events. “San Francisco is a union town,” Gonzalez said. “Some people say San Francisco is a bubble, but it is not — it’s a fortress” built by union members and protecting the city from assaults by anti-labor forces. Gonzalez said labor unions want to support a bond measure to build more affordable housing, but that the work needs to be covered by a project labor agreement that guarantees good union wages and health care benefits. Gonzalez urged union leaders to not just get close to candidates for elected office but to their fellow workers and help move the Democratic Party forward with working class values at the core.

“The Labor Movement is a major pillar of the Democratic Party,” Paulson said. “I’m proud to be the labor caucus chair and to represent labor’s interests in the party.”

The theme of the CDP Organizing Convention was “Blue Wave Rolling.” The CDP State Convention is the largest gathering of active Democrats from around the State. More than 3,400 delegates registered and over 5,000 people including media and guests attended.

Hicks told the 650-plus trade unionists that the Democratic Party needed a champion who would fight for equal pay for equal work, pensions, health care and workers’ rights. “Labor has a great partnership with the Democratic Party,” Hicks said. “The party’s top priority should be grassroots organizing to create people-powered campaigns.” Hicks touted his leadership in campaigns for progressive policies — including protecting workers from wage theft and harassment, increasing the minimum wage to $15, promoting clean energy transit, and protecting immigrants. Hicks said he believes the CDP, “Should be a leader in the resistance to Trump while working to elect Democrats — from school boards to the White House.”

After winning the election, Hicks said, “Coming out of the labor movement, I believe in the collective. I don’t believe in the individual. In order to see a change in the White House, we’re going to have to have a real change in the California Democratic Party, and that starts with us standing together tonight.”

Hicks also said he would implement policies to restore the party’s credibility in the wake of allegations of sexual harassment against former Chairman Eric Bauman, who resigned last fall. “We have to put in not only the culture that says that this is no longer tolerated, but also the systems that ensure that it never happens again,” Hicks said. “We have to have a system in which complaints can actually be lodged, that they are investigated by a third party and that we take clear and decisive action.”

The CDP Labor Caucus also featured updates from several union campaigns, as well as a report from California Labor Federation Executive Secretary-Treasurer Art Pulaski on labor’s successful campaigns in 2018 to elect Democrats to seats in Congress formerly held by Republicans. “We flipped the House of Representatives and got rid of terrible Republicans like Darrell Issa,” Pulaski said. “We were successful because we started a year early”— campaigning for Democrats in the Central Valley, as well as helping elect Democrats in Nevada. Pulaski said labor doesn’t win just electing good candidates on Election Day, but when those elected leaders pass bills that benefit workers, such as AB 5, which addresses the issue of misclassification of employees.

State Building Trades president Robbie Hunter said, “In 2016 we lost because a lot of workers didn’t believe the Democratic Party represented them. We have to talk about the working class — that when you lift up the working class, you lift up African-Americans, Latinos, gay kids. We have to push working class values in 2020 and help working people in this country.” Hunter said building trades apprenticeship programs have benefited tens of thousands of people, including those formerly incarcerated, with career pathways to good union jobs.

Vermont Senator Bernie Sanders received a rousing welcome from union members and pitched his candidacy for President to Labor Caucus members. Sanders touched on his usual themes of addressing income inequality at a time when “the billionaire class is doing well” and the 99 percent is not, and enacting a single payer Medicare for All health care system. Sanders called for equal pay for equal work, ending “right to work” laws, said his Workplace Democracy Act would enable more workers to unionize through a card-check process.

State Schools Superintendent Tony Thurmond spoke on behalf of California Senator Kamala Harris, who he pointed out has been a strong advocate for public education, and “is already campaigning for the rights of childcare workers to unionize.” All the major Democratic presidential candidates spoke at the convention over the weekend. The CDP will meet in November to consider endorsing a candidate for President in the Democratic primary election in California to be held in March 2020.