One Steuart Lane Starting to Rise 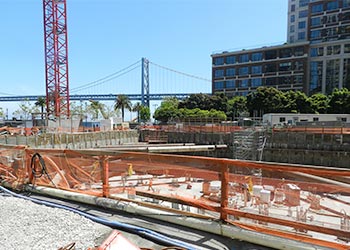 The 20-story, 220-foot-tall tower development at One Steuart Lane is one of the last remaining sites on the downtown San Francisco waterfront.

A new 20-story, 220-foot-tall tower condominium development at Steuart and Howard will soon be rising as crews prepare to pour the foundation slab for the all-union project. Swinerton is the general contractor, with a small crew of operating engineers, laborers and carpenters on the jobsite. Crews demolished the parking garage at the site last spring and began construction last summer. The building is slated for completion by 2021.

Formerly known as 75 Howard, the 120-condominium tower located on one of the last remaining sites on the downtown San Francisco waterfront is being built by the John Buck Company, Paramount Group, and SRE Group—a Hong Kong based investment company that purchased a majority stake in the building in 2017 for $110 million. Paramount Group’s Vice President for construction, Marce Sanchez, said, “Paramount Group’s policy is to always go with all union labor for the construction because of the high quality of the work. We take pride in the quality of our buildings and use union building trades in our projects in D.C., New York City, and San Francisco.” The project will create 250 full time jobs during the course of construction.

One Steuart Lane is being marketed as a “luxury residential high-rise at the tip of the East Cut neighborhood” with three- to one-bedroom condominiums, a sun terrace, 24-hour valet, unobstructed views of the Bay Bridge and Ferry Building, and a private fitness center and spa. Designed by architects at Skidmore, Owing, and Merrill, the building will also feature 4,500-square-feet of retail space.

“One Steuart Lane represents an opportunity that will likely never again exist in San Francisco” said Ben Kochalski, Principal, The John Buck Company. “The San Francisco market has proven ready for a building of this caliber right now as tech titans open new offices in the city. With limited for-sale inventory slated to hit the market in the coming years, demand will grow for upscale housing that offers subtle, yet high-class design elements and is conveniently located next to the growing tech hub.” Since there are no below market rate units on site, Paramount will contribute approximately $10 million to the City’s affordable housing fund for construction of below market rate housing off site.

The developers are targeting LEED® Gold certification through sustainable building practices and energy efficient feature. The building will have a minimally reflective, ultra-clear glass facade to maximize the use of natural light and passively heat the residences and reduce energy consumption. According to the architects, “To facilitate the panoramic views and unobstructed wrap-around terraces, the building’s structural design comprises stepped flag columns along each elevation and sculptural corner column capitals, along with a computationally-optimized post-tensioning layout, to allow the eight-inch flat slab to cantilever as much as 20 feet.” The tower doesn’t use a typical vertical design and instead residences are stacked into different blocks with balconies in between. “We wanted to consciously make it not look like a commercial tower,” SOM Senior Consulting Design Partner Craig Hartman said.

Major subcontractors on the all-union project include Webcor, Rosendin Electric, ACCO Engineering for plumbing, and Marelich Mechanical for HVAC work.