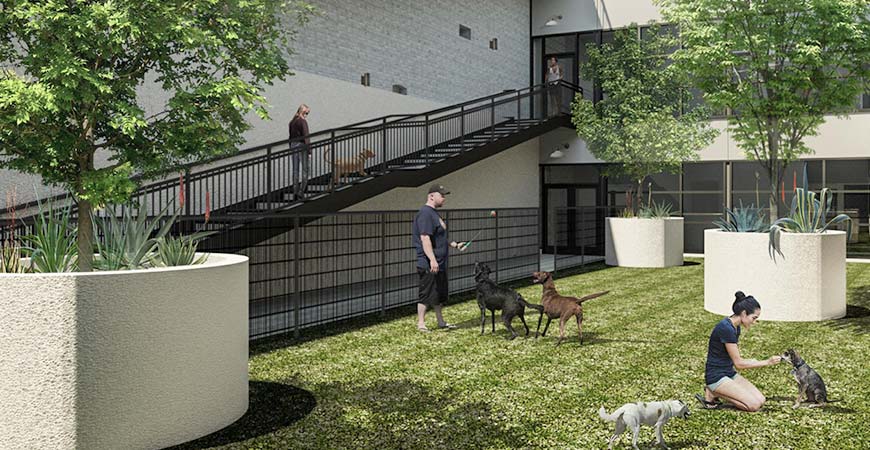 Animal Care and Control’s new facility is designed to better handle the 10,000 animals sheltered per year by ACC.

San Francisco Animal Care and Control’s current location at 1200 15th Street was built in 1931 with the intended use as a warehouse for goods, not a home for animals. Following a six-month long renovation project in 1989, the building took on a new life as the city’s only open-door animal shelter, meaning that all animals are accepted, domestic or wild. However, due to age and changing standards, the 15th Street facility has been deemed seismically unsafe and obsolete in terms of animal care, so an adaptive reuse project is underway on a historic brick building at 1419 Bryant Street for ACC’s new home.

“This is an exciting project because we have the opportunity to reimagine the use of a historic structure,” said Rachel Gordon, director of policy and communications for Public Works. “San Francisco is going through a transformative change now, with a growing population and a building boom. It’s nice to be able to hold on to a piece of our past while at the same time taking care of a modern-day need to better serve our city.”

Public Works is managing the project set to break ground the second week in May, and Clark Construction is the general contractor. Completion of the renovation is estimated for January 2021. Although the Bryant Street structure is even older — built in 1893 — the opportunity to preserve the historic building while enabling better care for animals and conditions for ACC staff, justified the decision to move and renovate. The new location is also in close proximity to San Francisco SPCA, which helps facilitate adoption of the animals. Following completion of the project, the building at 1200 15th Street will be used by SFMTA and that agency will also relocate its operations at 1419 Bryant to a warehouse at 1570 Burke Avenue.

The project site was originally the Market Street Railway Company powerhouse, which was expanded in 1902. In more recent years the building has been used for storage by Muni, however it is classified as a Contributing Resource to the Showplace Square Historic District. The project will preserve the exterior components of the building that’s also eligible for listing in the state and national register of historic places.

The new Bryant Street facility will be 56,000 square feet, and able to house up to 85 dogs and 140 cats, with about 12,000 square feet of additional space within the historic building. The extra square footage is being considered for lease as Production, Distribution and Repair space.

The new facility is designed to better handle the 10,000 animals sheltered per year by ACC. The department’s current enclosures are cramped, which can lead to disease outbreaks and stress the animals. The project is geared to provide safer, more sanitary and human conditions. This will be achieved through specialized ventilation systems, room finishes, acoustical treatments and cleaning mechanisms. In the event of an earthquake, the seismic and other upgrades will enable ACC to continue operation — something that has been shown to be vital following natural disasters in other parts of the country for both animal welfare and public safety.

“We’re proud of having a long history of working with the City on projects,” said Kimberly Wood, director of strategic communications, Clark Construction. “So this is a continuation of that as well as an interesting and different project.”

ACC’s mission is to adopt, rehome or reunite domestic animals with their guardians and to release wildlife to their native habitat. The department fields 16,000 calls every year from the public regarding emergencies, public safety issues or cases of abuse or neglect.