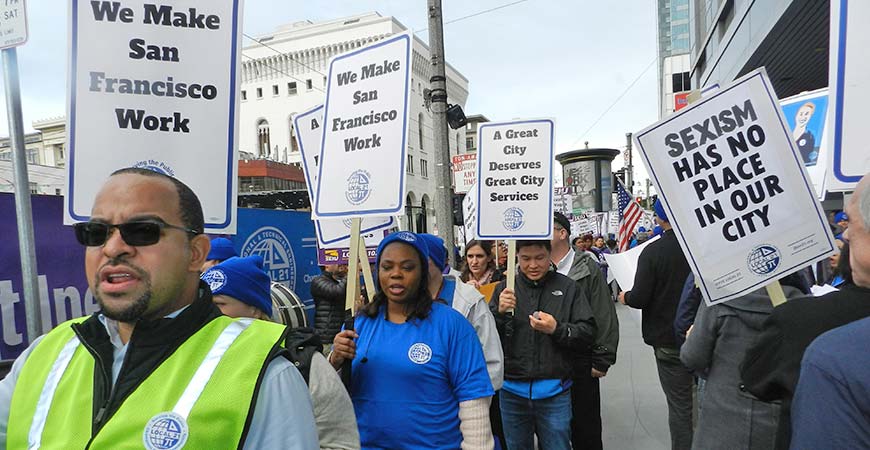 Members of the Building Trades, SEIU Local 1021, IFPTE and the Teamsters rallied in front of the Metropolitan Transportation Administration on March 7. - Photo by Paul Burton

Members of the Building Trades joined a rally organized by Service Employees International Union Local 1021 (SEIU) on March 7 in front of the Metropolitan Transportation Administration building at Market Street and Van Ness Avenue to demand an end to discrimination in City agencies and a fair contract with living wages for City workers. Members of the International Federation of Professional and Technical Employees, Local 21 (IFPTE) and Teamsters also participated.

“Our members do the work that keeps the city running,” said San Francisco Building and Construction Trades Council Secretary-Treasurer Tim Paulson. “Sheet metal workers install and maintain HVAC systems at SFO. Plumbers maintain the water delivery system from Hetch-Hetchy for the Public Utilities Commission. Electrical workers and machinists keep the busses running for the MTA. Cement masons and laborers do street repairs and maintenance for the Department of Public Works. Laborers work to keep our beautiful parks and recreational facilities maintained. Bricklayers help maintain the City’s aging sewer systems. Now is the time for these workers to get a real raise so they can afford to continue to live and work in San Francisco.”

The MTA building is also the site of the City’s Department of Human Resources, where some of the contract negotiations are taking place. All City contracts expire in June, with various public sector units in bargaining now except for police and fire.

San Francisco Labor Council and Building Trades Council Secretary-Treasurer Tim Paulson and President Larry Mazzola, Jr. are leading the negotiations for the Building Trades. The plumbers, electrical workers and laborers have their own collective bargaining agreements but still bargain with the other trades, Paulson said. A Consolidated Crafts Coalition including other building trades unions negotiates on separate multi-craft agreements. Paulson and Mazzola have been involved in the bargaining for the individual building trades union contracts, the multi-craft contract, and on the Public Employee Committee that includes other public sector unions as well as building trades unions.

With union representatives and City negotiators currently at an impasse, arbitration dates have been set for April.

Vince Courtney, Political Director for Laborers Local 261, said, “There has been extraordinary solidarity in the contract negotiations. I haven’t seen anything like it in my 15 years working for labor.”.

The rally held the day before International Women’s Day, featured a number of workers who complained of unfair treatment on the job. A report released in late January alleged rampant bullying, verbal abuse and sexual harassment within City departments.

SEIU members called for the City to strengthen its poverty and homelessness prevention programs, prioritize services for women and families, and negotiate a fair contract with workers. A statement from the union noted that, “Income inequality hurts all of us but attacks on the public services and programs that we provide hurt women disproportionately. Women are still 35 percent more likely than men to be in poverty in America.” The SEIU statement noted that The City and County of San Francisco employs the most women of color in the region in its departments, hospitals, clinics and agencies, with women of color generally occupying lower paid and less stable positions — including those that care for the city’s sick and elderly. Yet the City is proposing to roll back anti-discrimination protections in their contracts.”

“We’re proud that our city’s mayor is a woman of color, who was raised in San Francisco and who can lift up the issues [of] our community,” said Theresa Rutherford, SEIU 1021 San Francisco Vice President and patient care assistant at Laguna Honda Hospital and Rehabilitation Center. “We’re urging Mayor Breed and our city leaders to address sexual harassment, and racial and gender discrimination facing thousands of City workers.”

“Employment with the City and County of San Francisco should be a place where working women, LGBTQI people, and people of color can find a rewarding middle class career ladder and workplace that respects their rights,” IFPTE Local 21 bargaining team member Frances Hsieh said. “Today, too many workers are falling behind, more jobs are being outsourced, and the City is proposing to roll back collectively bargained contract provisions that protect employees from discrimination.”

IFPTE represents 5,700 public sector employees who work for various City departments and agencies as well as at San Francisco International Airport. The professional employees include engineers, architects and auditors. IFPTE Local 21 communications specialist Jessica Bowker said the union’s top priority is increasing wages and saving the middle class in San Francisco. IFPTE recently released a policy brief on the shrinking middle class in San Francisco even as the city’s economic forecast is robust and revenue from property taxes continues to grow. Since 2005, City and County revenue has nearly doubled to $10.4 billion. In the last four years alone, revenue has increased 23.5 percent.

“Our research clearly shows the economic health of San Francisco, but it also shows how the city is becoming less and less affordable as wealthier people move to the city and middle and working class families are forced out,” Bowker said. As wages have not kept up with the increasing cost of housing, 57 percent of Local 21 members have turned over in the past five years, seeking better paying jobs in other cities or the private sector.

“While claiming that the budget is in bad shape and that employees are to blame, the City is also steadily increasing the outsourcing of our work,” Bowker said. She noted that the City spent $3.583 billion on contracting out public sector work last year — over 30 percent of the San Francisco budget. “This is money that can and should be spent on a steady, permanent workforce who can do San Francisco’s work in-house, and who will strengthen the middle class in our city rather than continue to see it disappear,” Bowker said. The temporary workers are essentially at-will employees without union representation or civil service protections. IFPTE is seeking civil service protections for them.

The City proposed that IFPTE waive its members’ rights to be covered by the City’s Sick Leave Ordinance, restrict City workers’ ability to address discrimination and harassment at work, and weaken the union members’ rights to use their contract protections to address other workplace issues.

Bowker noted that solidarity among the unions representing City workers has been especially strong this year. “Unions are staying strong together,” she said, noting that when one union gains better wages and benefits, other unions do also.

In January, the Building Trades Council and San Francisco Labor Council called for the City to use an unexpected windfall in property tax revenue from the State — including part of the $181 million in discretionary funds — on its workforce. “We call on city leaders to invest this revenue in the workers who are the backbone of our city government and public education system,” said Rudy Gonzalez, Executive Director of the SF Labor Council. “Using these funds to expand and strengthen the essential public services that San Francisco residents rely upon, will help us address the long-term challenges of rising income inequality, homelessness, and housing.” The labor groups called for $60 million to be used to help recruit and retain City workers, $60 million to support public education, and $60 million to expand homeless services and strengthen public housing. On March 7, Mayor London Breed announced that most of the $181 million would go towards addressing housing and homelessness, including construction of housing for homeless people, purchase of land for affordable housing and public housing upgrades.