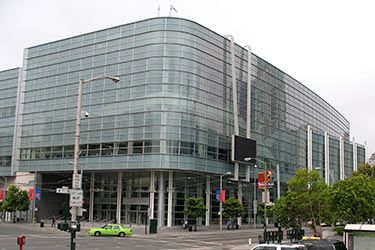 The completion of the Moscone Center expansion, celebrated Jan. 3, will allow the City to remain competitive for trade shows and conventions.

Project Expected to Give City Edge on Tourism, Tradeshows

City officials celebrated the completion of the Moscone Center expansion project with a ribbon-cutting ceremony January 3.

“This expansion is something that is overdue. It is going to help generate the kind of tourism that San Francisco is so very proud of,” Mayor London Breed said. “This convention center will host and bring visitors from around the world who are going to not only visit here but also work here and as a result will generate millions of dollars in revenue here at this convention center and for our hotels and small businesses in our surrounding communities.”

Union contractor Webcor Builders is the general contractor for the $551 million project that added over 350,000 square feet to the center, bringing the total amount of usable space at the center’s three buildings – Moscone North, South and West – to over 1.1 million square feet. The interior renovation included upgraded finishes, improved on-site audio/visual capacity, improved functionality for different types of conventions and compliance with the Americans With Disabilities Act. The expansion added new exhibition space, meeting rooms, ballroom space, a kitchen, pre-function space and other support areas in a new building on the south side of Howard.

The project was designed to meet LEED Platinum status through sustainable building practices and energy efficient systems. The buildings will feature energy efficient HVAC and mechanical systems, natural lighting and ventilation, low VOC flooring, and low-flow plumbing systems, The project also features the largest solar panel array in the city, which will provide 20 percent of the electricity for the convention center. A water treatment system will capture and use an estimated 15 million gallons of rainwater annually for landscaping and street cleaning.

According to the San Francisco Department of Public Works, which managed the expansion, the economic benefits of expanding Moscone include a $20 million projected increase in hotel tax revenue, and income from conventions and total visitor spending of over $734 million through 2026. The convention center expansion and renovation will also produce over 3,400 permanent new jobs, including for line service workers in the hospitality industry that will benefit from more visitors to Moscone.

The expansion of the Moscone Center created over 3,000 construction jobs and will create more jobs for the workers who set up exhibits, build displays, and run lights, sound and video at the shows and conventions.

Joe Toback, Business Representative for Sign and Display Local 510, told Organized Labor in 2013 that the union wanted to have a voice in the process and the design because it impacts the people who work there. He said the union had concerns about the swing stage scaffolding and access to rigging points, among other issues.

“The architects produced a state-of-the-art building without shutting down events, and finished on time,” Toback said recently. “That is remarkable. The result is we got an increase in exhibit space that is going to be great for visitors.” But Toback reiterated that the architects who designed the project spent more time listening to neighbors’ concerns about shadows than the needs of the people working trade shows who have knowledge about the day-to-day functioning of the facility. Toback said Local 510 and the Stagehands union (IATSE Local 16) still have criticisms about the size of the elevators and loading areas, and the number of hang points for rigging lights and displays, as well as other concerns.

Toback said Local 510 members would potentially benefit from having a building with much more exterior surfaces for hanging signs and graphics. The union has between 500 and 1,000 members working conventions and trade shows, and is currently recruiting more apprentices. “More could have been done to address our concerns,” he said. “The building itself is beautiful and we look forward to working through the issues to see what can be done.”