Safeway Pulls Out of Deal for Project at 4950 Mission 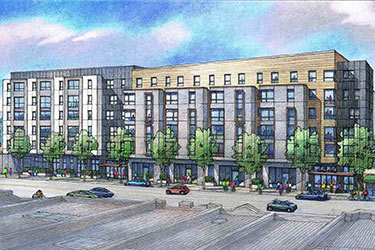 A plan to build 253 new market rate apartments and a new Safeway grocery store at the Safeway at 4950 Mission has fallen through as Safeway pulled out of the deal with developer Emerald Fund last month.

“It proved difficult to negotiate an agreement that worked for both Safeway and for the project,” said Emerald Fund Chairman Oz Erickson. “We are very disappointed.” A 426-unit apartment complex, a new 53,000 square foot Safeway store, 15,000 square feet of retail and a 10,000 square foot Mission Neighborhood Health Center had been planned for the 3.5-acre site that also includes the Valente Marini Perata & Co. funeral home at 4840 Mission. The preliminary plans submitted last December also called for 175 below market rate apartments to be built by non-profit developer BRIDGE Housing. The project was partially funded by union pension funds through the National Electrical Benefits Fund (NEBF).

BRIDGE Housing’s Vice President of Communications Lyn Hikida said the developer is working with the city to redesign the project and find a way to build the planned affordable units. “BRIDGE is committed to maximizing affordable housing and creating a new space for the clinic,” she said. “We are working with our partners to iterate and determine a feasible plan forward. Emerald was going to subsidize 72 of the 175 units – we are now researching creative solutions to maximize affordable housing. We are revisiting sources and other options.”

Excelsior District Supervisor Ahsha Safaí blamed Safeway for the failed negotiations, telling the San Francisco Chronicle the supermarket company repeatedly sought to renegotiate the terms. “We negotiated a deal with 41 percent affordable [housing] and a beautiful grocery store and health center,” Safaí said. “Unfortunately, Safeway has reneged on their portion of the deal.” While some neighborhood groups opposed the project and called for more affordable units – or for 100 percent of the units to be below market rate – Safai told the Chronicle, “Community opposition had nothing to do with” the plan falling through. “This was purely Safeway continuously moving the ball in negotiations,” he said. “This was all about Safeway’s bottom line and them going back on their word.”

If BRIDGE housing is able to still build the promised 175 units of affordable housing, they would likely be built union as a condition of receiving funds from the NEBF.