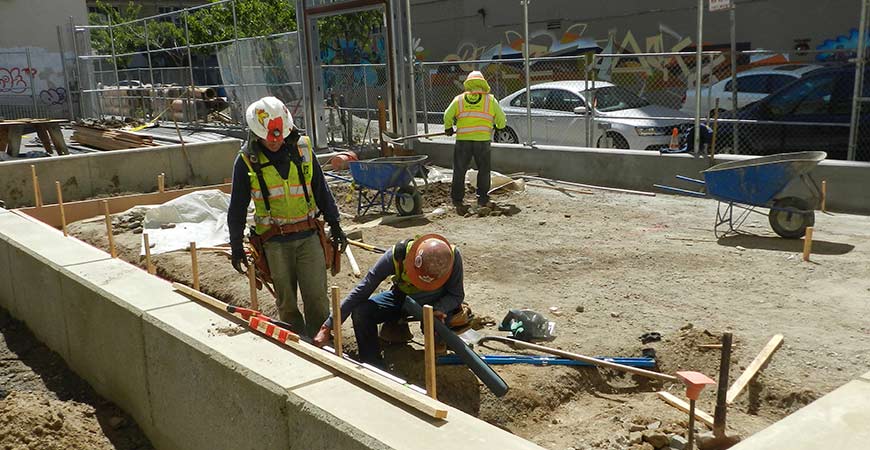 Modernization work at SFUSD sites continued this summer thanks to a pair of bond measures passed in 2011 and 2016. Pictured, crews from Zolman Construction doing exterior work at Redding Elementary School. - Photo by Paul Burton

Several school modernization projects are nearing completion this summer in time for the 2018-2019 school year. Some are funded by the $531 million Facility Bond Measure passed in November 2011 to modernize 65 school sites, and others by the $744 million bond measure passed in November 2016. Work on the 2016 bond funded projects began in 2017, with several more projects seeking bids over the next several months.

Work is covered by a Project Labor Agreement between the Building Trades and San Francisco Unified School District that guarantees prevailing wages and union benefits. Many of the projects are being built by all-union crews. SFUSD Director of Construction for the bond program, Maureen Shelton, said the PLA has worked well and projects have been completed on schedule. Contractors have been able to meet the challenges of working intently during the summer months. They’ve also effectively handled work during busy school hours the remainder of the year, while working towards local hire goals for construction crews.

About 20 construction workers were making final improvements in early July. The project employed about 200 union building trades workers over the scope of the project. SFUSD’s Senior Project Manager, Narayan Naidu, said crews were on schedule to complete the all-union project in time for the start of the 2018-2019 school year on August 20.

Naidu said that a unique and challenging feature of the project was seismically strengthening the brick building by tying the brick exterior into new steel columns that run from the foundation to the top of the building. He said each floor is tied to the steel columns with vertical and horizontal supports, which allow for some movement of the structure during an earthquake.

Future projects funded by the 2016 bond measure Prop A will include completing seismic safety and modernization projects to make all schools and other District facilities more resilient to earthquakes. The funds will also build more energy efficient school structures like classrooms to accommodate a growing student population, while maintaining and expanding the District’s Green Schoolyards program to 91 school sites. Prop A will also help fund technological improvements such as higher-speed Wi-Fi for all classrooms, and the development of a new SFUSD Arts Center and Ruth Asawa School of the Arts to preserve and promote music and arts curriculum. The District will also explore methods for developing affordable housing for teachers.