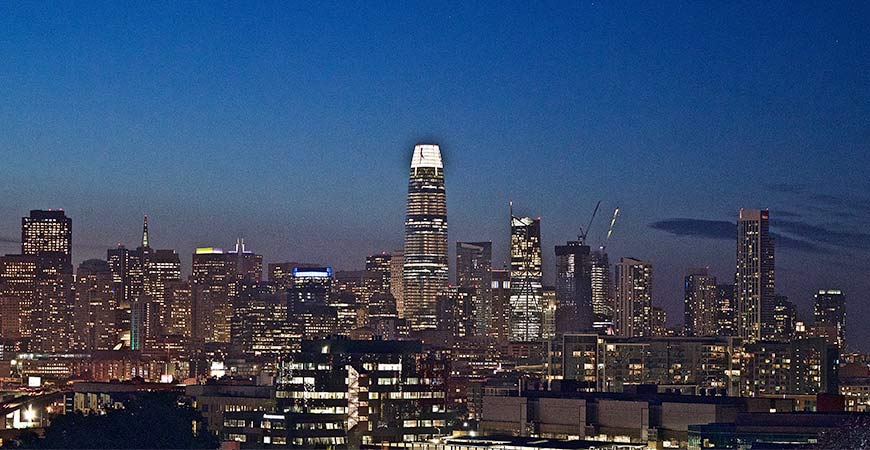 The top of the 1,070 foot tall Salesfroce Tower consists of 11,000 LED lights. Salesforce Tower is the tallest building in San Francisco and dwarfs the Transamerica Pyramid. - Photo by Jacob Bourne

On May 22, the new Salesforce Tower had its official grand opening ceremony. This marked not only a monumental addition to San Francisco’s skyline, but the establishment of the new tower’s position as the city’s tallest skyscraper, looming over the nearby Transamerica Pyramid. The ceremony’s ribbon-cutting was done by Salesforce CEO Marc Benioff who was flanked by then-Mayor Mark Farrell and District 6 Supervisor Jane Kim, among others.

“This building would not have been possible without the hard work and expertise of our building trade workers who went to great heights - literally! - to build this new San Francisco icon,” said Kim. “I was proud to stand with so many of our workers on opening day to celebrate what they had accomplished.”

Salesforce Tower was built with all union labor under a Project Labor Agreement culminating in a 1,070 foot tower with 61-stories offering 1.4 million square feet of space. The sleek, slender skyscraper located in the South of Market neighborhood at 415 Mission Street is supported by 42 piles driven down about 300 feet to bedrock. The topmost portion of the building is capped by an art display consisting of 11,000 low resolution LED lights created by local artist Jim Campbell. Various images generated by the lights are visible at night from many spots in the Bay Area.

At ground level, Salesforce tower connects with the Transbay Transit Center, which, when completed this year, will be a focal point for 11 regional transit systems. The transit center is topped by a 5.4 acre public park that’s also nearing completion. Salesforce Tower was developed by Boston Properties and Hines, and designed by Pelli Clarke Pelli. Construction was done by a joint venture between Clark Construction and Hathaway Dinwiddie.

“It’s the tallest building on the West Coast and the most prominent building on the San Francisco skyline,” said Mike Theriault, Secretary-Treasurer of the San Francisco Building & Construction Trades Council. “Having a 100 percent union project of this prominence is a point of pride for us. It’s also been a major contributor of payments for the development of the Transbay Transit Center, which along with Salesforce Tower are part of an emerging area that will be important for multiple transit systems and eventually for high speed rail, creating a transit hub for the region and the state.”

Salesforce currently leases over 60 percent of the tower and has about 800 employees currently enjoying the building’s many amenities such as views of the Farallon Islands, an exhibition kitchen, nature-inspired work and lounge areas, and meditation rooms. The building is geared toward achieving LEED V4 Platinum rating.

“One of the best stories here with Salesforce Tower is the sincere and heartfelt remarks about team work, accomplishment and pride that we have heard from the crafts people who committed their focus and expertise every day to build this great structure.  Their memories will be shared for generations amongst their families and our community,” said Peter Back, senior vice president of construction, Boston Properties.

The grand opening coincided with a $1.5 million donation from the philanthropic arm of tech company Salesforce to end chronic homelessness in the City. The donation was matched by Marc and Lynne Benioff totaling $3 million given to Hamilton Families’ Heading Home Initiative.