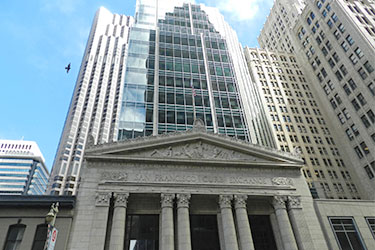 Union contractor Hathaway Dinwiddie completed work late last year on the new 20-story office tower at 350 Bush Street. The new high-rise features 18 floors of office space, one lobby level, a roof terrace, and a two-level sub-grade parking structure. The new glass tower incorporates the historic landmark San Francisco Mining Exchange Building, built in 1923, as its man entrance. The historic exchange hall will serve as a grand lobby for the modern office building as well as an event and socializing space.

Hathaway Dinwiddie’s project description notes that the project uses rusticated stone cladding with glass curtain wall accents and ornamental balconies, and that “the intersection of the modern glass curtain wall and the historic facade demonstrates a balance between antique and modern, expressing a unique vocabulary of forms and shapes.”

The contractor and architects with Heller-Manus, who designed the tower, noted that it was one of the most challenging projects they had done, as “the site is distinctly complex, involving various neighborhood constraints. As such, the approval process resulted in the incorporation of provisions for outdoor space…” In order to increase the square footage at 350 Bush, the developer agreed to create a park at an adjacent parcel at 500 Pine St., expanding St. Mary’s Square. Engineers and contractors also had to build a new foundation beneath the old building without damaging the structure.

The San Francisco Business Times reported in 2007 that Lincoln Property Company “acquired office building sites at 350 Bush St. and 500 Pine St. for more than $60 million and plans to start driving piles as soon as next spring ...” The economic downturn of 2008-2009 and other factors stalled the project, which had to win approvals from the San Francisco Planning Commission and Board of Supervisors, as well as the Recreation and Parks Commission and the Landmarks Preservation Advisory Board.

Bisnow noted that the project, “took over 40 years to develop… following a long-held battle between the land’s original owner, Walter Shorenstein, and the city.” Even after an office project was approved in 2000, “the building took another 15 years, two different owners and two economic cycles to get built.” Construction began in 2015.