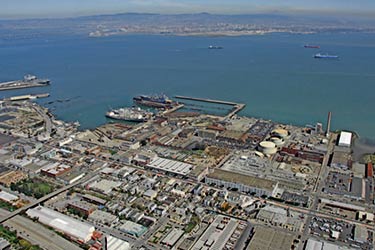 The impact of Proposition B is starting to be felt.

Prop B, which passed last month, restricts development along San Francisco’s waterfront by mandating voter approval of every project that exceeds height limits.

In response, representatives of Forest City Development presented Pier 70 plans to delegates of the San Francisco Building and Construction Trades Council at the council’s recent meeting. Forest City plans to place an initiative on November’s ballot asking for increased height limits for the project.

In 2011, the San Francisco Port Commission selected Forest City to develop a 25-acre portion of the Pier 70 Master Plan area. The “Waterfront Site” east of Illinois Street between 18th and 20th streets includes 2.5 million square feet of new buildings, a major park, and about 250,000 square feet of existing buildings. Forest City Development has a good reputation for working with union contractors and using union labor. The company worked with the Westfield Group to build the Westfield San Francisco Centre and developed the Presidio Landmark apartment complex.

The developer’s new proposal, the “Union Iron Works Historic District Housing, Waterfront Parks, Jobs and Preservation Initiative,” will ask voters to restore the height limit at the property from 40 feet to 90 feet, which is the height of the tallest existing historic structure on the site now. Forest City executive Jack Sylvan said the ballot measure to allow the 90-foot heights would be submitted to the City in July in order for the measure to be on the ballot this November. Sylvan said the developer decided to move forward with the height approval now instead of waiting for the 2016 election in order to determine how to plan for different heights in the project area. He noted that the height limit change has been endorsed by the Dogpatch Neighborhood Association, and is supported by the Potrero Boosters Neighborhood Association and some of those who backed Prop B in June.

“Folks are in support of this because they understand that what’s there now is not an asset,” Sylvan said. Still, the project will take advantage of the old buildings once used for manufacturing or maritime uses. Plans call for converting Building 12 – with its high windows and open floor area – into a maker’s market. The views of cranes at the nearby BAE ship repair facility are also touted as attractions for new residents of the Pier 70 project.

“The site is compelling because of its pioneering maritime history, waterfront location, the public benefits it is expected to generate, and the opportunity to advance the region’s growth economy in a unique way.”

The $242 million project will include rehabilitation of existing buildings that already exceed the 40-foot limit. Sylvan said Forest City had done “massive outreach” to the public since 2011, including tours of the site and open house events where neighbors could offer their visions for the area, and an open air market attended by more than 5,000 people. Forest City’s plan will include the development of at least 1,000 new units of housing, 1.8 million square feet of commercial space, 400,000 square feet of retail, cultural and manufacturing uses, and nine acres of new parks.

Once the project is approved by voters, the 18 to 24 month approval process through CEQA, the Planning Commission, and Port Commission will culminate with a vote by the Board of Supervisors in late 2016. Preliminary work could start in early 2017, including infrastructure planning and utility work. The entire project would be a 10 to 15 year build out, with an estimated 10,000 construction jobs. Sylvan said that new construction would be wood frame over a concrete podium. There will be approximately 10,000 square feet of historic structure rehab work. Sylvan said the developer is committed to working with the Building Trades on a project labor agreement as well as meeting local hiring goals of 25 to 30 percent.

Port documents backing Forest City’s proposal in 2011 noted that it envisions “an innovation cluster that combines high quality office space with diverse and inspiring public amenities for the broader San Francisco community.” It will “attract both mature biotech, high-tech and marine sciences companies, and start-up companies, machine shops, prototyping/testing, artist studios, and tech incubators for adaptive reuse of historic structures.” It has also attracted around 10,000 residents for its events that give neighbors a sense of what will be and to showcase local artists, artisans and designers who are tenants of the Noonan Building on the site.

“The site is compelling because of its pioneering maritime history, waterfront location, the public benefits it is expected to generate, and the opportunity to advance the region’s growth economy in a unique way,” Forest City’s President Kevin Ratner said. The developer added that between one million and two million square feet of new commercial and office space will provide up to 10,000 permanent new jobs at Pier 70.

Along with converting what was once a shipbuilding center into a mixed-use project with housing, shops, restaurants, and small manufacturers, Forest City’s plan will create a new park along the bay. The waterfront is currently closed off to public access. The project also takes into account the impacts of climate change by raising the grade of the site more than three feet to protect against sea level rise.

Sylvan said the project will also include affordable housing—with 600 homes affordable to low- and middle-income individuals. He said the proposal to have 30 percent affordable housing is more than double the amount currently required by city law. A majority of the planned 1,000 to 2,000 residential units will be rentals. The project will generate approximately $15 million in revenue to support the rebuild of public housing facilities, such as the nearby Potrero Annex and Potrero Terrace public housing communities, according to Forest City. The developer will also provide new studios at reduced rates for the artists at the Noonan Building.

Sylvan said since the measure would be voted on by San Franciscans city-wide, it would be important to inform people about the area who may not realize that Pier 70 isn’t actually a pier jutting out into the bay, like Piers 30-32, but an underutilized asset with potential.