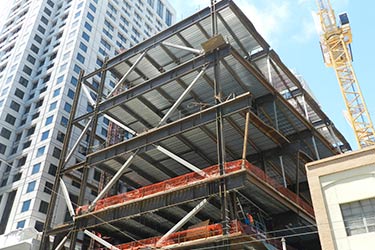 The challenge of building a complex structure in a tight space is being met by the all-union construction crews working on the San Francisco Museum of Modern Art (SFMOMA) Expansion Project. The museum broke ground on the new building in June of 2013 and began construction on its new 235,000-square-foot expansion. Union contractor Webcor Builders is the general contractor for the project designed by architectural firm Snøhetta in collaboration with the museum.

“The building has some very unique requirements,” Webcor Builders Vice President Matt Rossie said. Those include large spans to maintain clear art gallery spaces and unique geometry, with the east elevation curving in two directions. Rossie said the building façade is unique, using a fiberglass polymer composite material for a portion of the curtain wall.

“Structural steel erection has been challenged with the extremely tight site, leaving no room for staging material and requiring just-in-time delivery,” Rossie said.

The steel frame building is currently at the sixth floor and rising. Crews from Webcor Concrete completed a major structural concrete pour in late June, with a series of trucks navigating through traffic along New Montgomery Street to access the site from Natoma Street, a short block that ends at the construction site with limited space to maneuver.

“All of the subcontractors on the project are union employers,” Rossie said. “We currently have just over two hundred craftsmen on the project, executing some incredibly complex work.”

Webcor has experience working on architecturally unique projects, including those that have sustainable design features to meet LEED Gold standards. Webcor was the general contractor for the California Academy of Sciences in Golden Gate Park and donated construction services for the Museum of the African Diaspora near Yerba Buena Gardens. The new SFMOMA building will feature elements that reduce energy and water use. These include re-circulated water, energy-saving LED lighting systems in the galleries and lighting control systems that respond to changing daylight availability. Building materials are designed to minimize the transfer of thermal energy, the wood flooring in the current fifth-floor galleries will be repurposed for use in the new art conservation studio, and other recycling of materials will take place throughout the process.

The expansion will add ground level galleries, a central gathering space, a new sculpture garden, and orientation spaces that will be free to the public. The building runs contiguously along the back of SFMOMA’s Botta building, extending from Minna Street to the north to Howard Street to the south. The galleries in the existing and new buildings will be unified and double the current gallery space from 59,000 to 130,000 square feet. The design also features new pedestrian pathways that lead to and through the museum from the surrounding streets. The building also introduces a façade on Howard Street that will feature a large, street-level gallery enclosed in glass on three sides, providing views of both the art in the galleries and the new public spaces. When the building reopens in 2016, it will provide greater art experiences for visitors and support SFMOMA’s work in education, art conservation and in the international art community. During construction, the museum is presenting new art exhibits at different sites around the Bay Area.

The museum raised $610 million, with $305 million for the building project, $245 million for its endowment fund and $60 million for interim programming. The expansion project is entirely privately financed, so there is no local hire requirement as on a public project. Webcor is hiring some local workers in compliance with the City’s First Source Hiring ordinance.