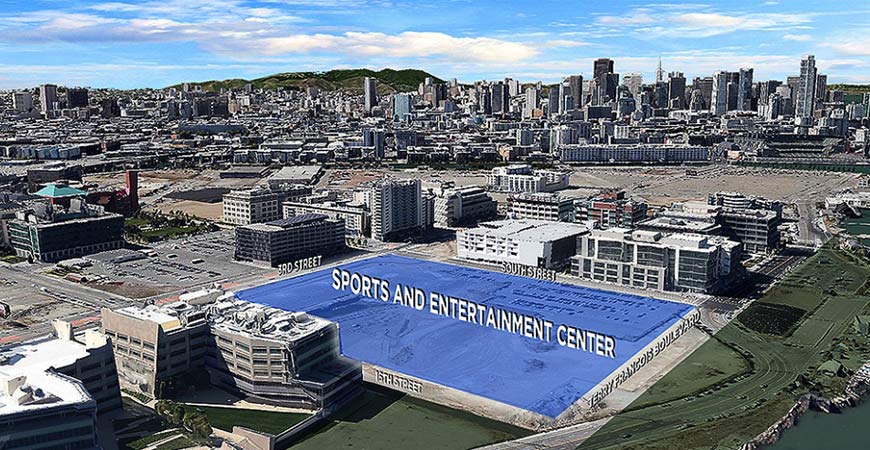 The Golden State Warriors announced plans to build their new arena in Mission Bay, abandoning an original proposal for the project to take shape at Piers 30-32 on the Embarcadero.

The Warriors did not say directly whether the move was a response to Proposition B, the successful June ballot measure that requires voter approval for projects that exceed current height limits along the waterfront. The team had indicated a willingness to take its arena plan for Piers 30-32 to the voters this November. Now, voter approval will not be needed as the new site is on privately owned land, and the proposed 125 foot height of the arena is well below the current height limit of 160 feet in Mission Bay. The Warriors have not released any preliminary designs for the arena, but said the basic elements planned for the Pier 30-32 project remain the same: an 18,000-seat arena for basketball games, concerts and cultural events.

The Warriors purchased the 12-acre parcel at Third and 16th streets in Mission Bay from Salesforce.com in April. Salesforce had proposed a multi-colored campus complex for the site, but abandoned its plans for the Mission Bay location last year and has leased all the office space at the tower under construction at Fremont and Mission in the Transbay Transit District.

While Piers 30-32 will remain vacant and still in need of funding for repairs, the Mission Bay location is touted as a win-win and considered ideal as that neighborhood adds new housing and businesses.

“We believe Mission Bay is a perfect fit,” said Warriors co-owner and CEO Joe Lacob in a press release. “It is a wonderful inland site in a dynamic part of the city that is convenient for fans from all over the Bay Area.”

The new location borders Muni’s Third Street Light Rail and is within a few blocks of Caltrain. BART connects to Muni at the Embarcadero BART station and will also connect to Muni via the Powell Street station once the Central Subway opens in 2018 – just in time for the 2018-19 basketball season.

Lacob noted that the arena will be privately financed and on private land, which he said is virtually unprecedented among major league sports and entertainment facilities in the U.S. The transaction with Salesforce.com involves no public property, he said, and no public subsidy. There are no naming rights or sponsorship rights associated with the transaction, according to the Warriors. The development will also create a new five-acre waterfront park across Terry Francois Blvd. from the arena that will be open and accessible to the public.

“We said all along that we wanted to create a spectacular cultural destination for the City and the entire region,” added Warriors co-owner Peter Gruber.

The team’s Chief Operating Officer Rick Welts commented that since announcing plans to relocate to San Francisco from Oakland, “we’ve spent the last two years listening. We’ve learned a lot. We are proud of the plans we have put forward to date and we’re thrilled to announce this great leap forward.”

The next steps will include more public outreach and public planning and environmental impact reviews before construction can begin. The Warriors expressed confidence that the project would be completed in time for the 2018 season.

The project will be covered by a Project Labor Agreement with the building trades, with potentially more than 2,000 construction jobs created over the three years of construction and 1,757 permanent jobs created. The team also reached an agreement with UNITE HERE Local 2 in 2012 to “provide a fair process for workers to choose union representation at the food service and hospitality outlets that will be part of the Warriors Arena project on the San Francisco waterfront.” The deal will ensure that restaurant, concession, and food service workers at Oracle Arena preserve their jobs when the San Francisco facility opens.

“The Warriors voluntarily agreed to pay prevailing wages and honor local hiring,” she said, for the privately funded arena project. “We remain committed to local hire and prevailing wages.”

The team will continue to work with the hotel workers union to keep their workforce at a new arena unionized.

The pre-construction contract for the arena was awarded to the union contractors Hunt Construction Group and Webcor. Hunt has built many sports facilities around the U.S., including the Barclays Center basketball arena for the Brooklyn Nets, Citi Field in New York for the Mets, and Nationals Park for the Washington Nationals. Webcor completed a major seismic retrofit project for UC Berkeley’s Memorial Stadium last August.