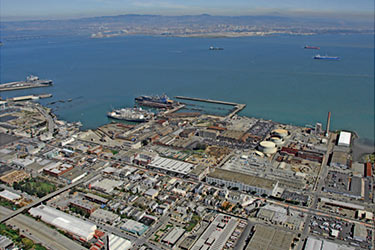 "This agreement protects the will of San Francisco voters. It ends this lawsuit while ensuring that voters continue to have their voices heard when it comes to the use, access and enjoyment of San Francisco's waterfront," Herrera said.

Prop. B, promoted by opponents of the 8 Washington project along The Embarcadero, codified existing building height limits ranging from 40 to 84 feet for development along the city's waterfront. When the ballot measure was filed in 2014, the San Francisco Chronicle reported that opposition to increasing height limits was largely driven by the desire of Telegraph Hill residents and others to protect their views. In his February 2014 story, John Cote wrote that "according to the latest campaign finance filings, the effort has so far been funded exclusively by $75,000 donated from Barbara and Richard Stewart, a wealthy couple who live in the Golden Gateway Apartments and were the major backers opposing 8 Washington, which would have been built between their building and the water."

San Francisco Building Trades Council Secretary-Treasurer Mike Theriault was a plaintiff in a separate lawsuit filed in SF Superior Court in February 2014 challenging the ballot measure before it was placed on the ballot because it would regulate state lands held in trust for all the people of the state. Affordable housing advocate Tim Colen and open space and parks activist Corinne Woods were also plaintiffs. At the same time, Mark Meier, the chief legal counsel for the State Lands Commission, questioned the legality of the proposed measure, writing in a letter to City Attorney Dennis Herrera that it was of "questionable validity." Meier wrote that the Commission has "concerns about the legality of this proposed initiative. The land use and management decisions that the city makes regarding these public trust lands cannot be overridden by the local initiative process. The proposed initiative attempts to unlawfully delegate certain decision-making authorities to local voters." A judge ruled against the pre-ballot lawsuit; the State Lands Commission filed its suit in July 2014 after the measure passed.

According to the City Attorney's office, the State Lands Commission will drop its lawsuit challenging the validity of Prop. B, and agree not to challenge the application of Prop. B to projects that voters already approved at Pier 70 and Mission Rock. Developer Forest City put forward an initiative following the passage of Prop. B and won voter approval for increasing heights at its Pier 70 project.

As part of the settlement, the City agreed to acknowledge that it is subject to state laws regarding the public trust and "will ensure that future waterfront land-use decisions from City officials include written findings that the approved developments are consistent with the public trust and benefit the people of California." The City must also amend its Elections Code to require that voter initiatives that would change land use or zoning on trust lands, or approve a project, include a statement in the ballot pamphlet that the measures involve public trust land.

As part of the settlement, the State Lands Commission will work with the Port to seek state funding to upgrade San Francisco's seawall to withstand earthquakes and the effects of sea level rise caused by climate change. The State Lands Commission and Port will also work together to facilitate the placement of affordable housing on trust lands where housing is permitted.

"San Francisco voters, the Port, the City and State Lands are all on the same side today, working to protect and enhance the San Francisco waterfront for the public now and into the future," Port Director Elaine Forbes said.

Mayor Mark Farrell also praised the deal, calling it a "win-win" for voters, the City and the State. "The San Francisco waterfront is an iconic feature of our City and an integral part of our history. With this agreement we can move forward with measures to support affordable housing, strengthen our seawall and carry out improvements that will continue to make the waterfront a world-class resource for all our residents and visitors," he said.

The settlement followed a hearing in San Francisco Superior Court in January. Joel Jacobs, attorney with the California Department of Justice, had argued that Proposition B created a "flawed decision-making system" when it gave voters control over waterfront height limits. He added that forcing developers to win approval from voters through a referendum makes projects more expensive for developers and limits funding for Port infrastructure projects.

Herrera had argued that the State Lands Commission's view defies California's well-established constitutional right to initiative and ignores nearly five decades of land-use regulation involving Port property – ever since San Francisco voters themselves approved the transfer of state tidelands to local control in 1968 under the Burton Act.

"This settlement harmonizes the rights of San Francisco's voters with the state's interest in administering public trust lands for the benefit of all Californians," Herrera said.

The City and SLC reached their settlement before the judge ruled on the case. The agreement must now be approved by the San Francisco Port Commission, Board of Supervisors, and the State Lands Commission—composed of Lt. Governor Gavin Newsom, State Controller Betty Yee and Finance Director Michael Cohen.

Former Mayor Newsom weighed in, saying that "common sense prevailed" in the settlement. "Through this agreement, we've accomplished the State Lands Commission's objective in bringing this litigation: to prevent Prop B from creating a precedent weakening environmental protections statewide. And I'm pleased that we've been able to accomplish this in tandem with upholding the will of San Francisco voters and shielding taxpayers from further unnecessary legal costs," Newsom said.