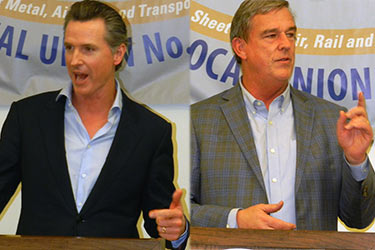 Newsom attended the meeting to talk about his candidacy and his support for building trades issues. Pointing to the Trump administration’s ongoing assault on labor and unions – including stacking federal agencies and the NLRB with corporatists – Newsom said, “I think we in California are going to war, and you need a war time governor who will fight to support your members and win the hearts and minds of non-union workers.”

He added that he feels it’s jaw dropping to see the attacks on pensions and the appointments of anti-labor officials to positions dealing with labor rights. Newsom expressed a desire to reach working class voters who backed Trump. He pointed out that 26 counties in the state went for Trump, and said, “We can’t talk down to folks in Placer County who voted for Trump. They want to be respected and protected. We have to re-frame the discussion to unite people.”

Newsom said he was proud of the work he did as San Francisco Mayor, including his support for project labor agreements, prevailing wages, apprenticeships and the CityBuild pre-apprenticeship program. “You know my record,” he said. “Now the rest of the state knows it; that’s why the largest public sector unions – from teachers to teamsters and laborers – back my campaign.” Newsom also mentioned that it’s time to invest in the State’s infrastructure and build more housing while respecting prevailing wages and labor rights.

Council President Larry Mazzola, Jr., asked Newsom about his stance on modular housing, saying “We want more housing, but not at the expense of workers.” Newsom replied, “There is nothing inherently wrong with modular housing, but we need standards.” He said Governor Jerry Brown supports modular housing and “there is momentum to build it.” Newsom said he wants to be at the forefront of the discussion and deal with the issue ahead of any legislation that will come up to ensure that units are well-built, safe and employ union labor.

Charlie Lavery of Operating Engineers Local 3 asked Newsom what his plan was to address the state’s ongoing drought. Newsom said, “We need to start spending the money [raised through the water bond passed in 2014] on above-ground storage and recycling.” He then spoke on other measures like the Delta Tunnel and desalination, which he said creates a significant number of jobs.

Building Trades delegates heard from District 8 Supervisor Jeff Sheehy and challenger Rafael Mandelman, a member of the San Francisco City College Board of Trustees, and voted to back Sheehy, who was appointed to the Board of Supervisors last year to fill the remainder of now State Senator Scott Wiener’s term.

Sheehy said his priorities include supporting Mark Farrell’s legislation for a City-wide PLA and expanding the City’s Minimum Wage Compensation Ordinance (MCO) to cover more workers. He said increasing the minimum wage for those not covered by the MCO would result in an additional $3,600 annually for low-wage workers, which he noted is a significant amount.

“I have no use for modular housing,” Supervisor Sheehy said. He added that efforts to promote modular housing are “a classic example of pitting groups against each other – building trades workers versus the homeless.” He said it was important to have union workers build housing to ensure good quality construction. Sheehy said he has co-sponsored “housing for all” legislation with Supervisors London Breed and Ahsha Safai that would fund housing construction with $100 million annually for 10 years through a gross receipts tax on large businesses. “They just got a tax break from the federal government,” Sheehy said.

Sheehy got personal when he expressed concern over the future of San Francisco’s housing market. “I’m for developing San Francisco into a 21st Century city that my daughter can live in and enjoy, with affordable housing and transportation.”

Supervisor Sheehy told attendees he does not support efforts to fast track workforce housing construction in the City that does not protect workers. He went on to say that it was inappropriate sponsors did not talk to the trades before writing the ballot measure.