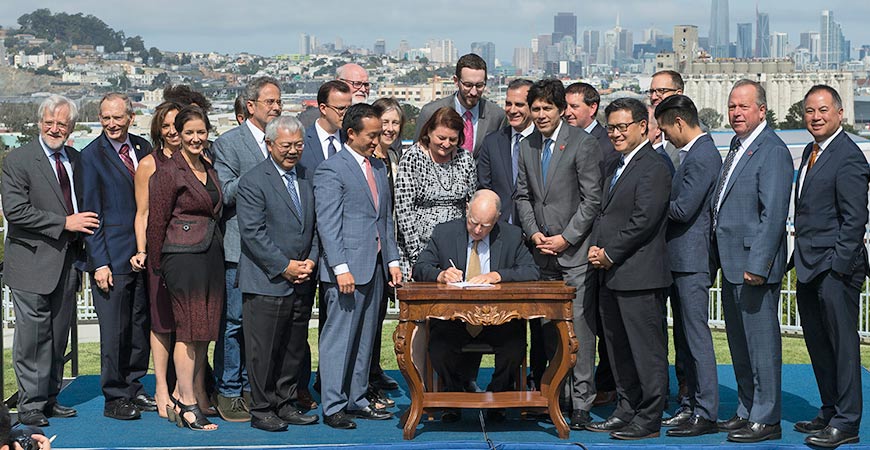 On a hilltop at the Hunter's View housing project, overlooking the San Francisco skyline, Governor Jerry Brown signed 15 bills into law on Sept. 29 that will help increase the supply and affordability of housing in California. The legislative package provides funding for affordable housing, reduces regulations, strengthens existing housing laws and boosts construction. The State Assembly passed the package of bills at the end of the legislative session Sept. 14.

"This is probably the biggest bill signing that I've ever seen because this deals with something so basic as shelter and how we live," Brown said. "These new laws will help cut red tape and encourage more and affordable housing, including shelter for the growing number of homeless in California."

Senate Bill 2 imposes a real estate transaction fee of between $75 and $225 that will raise $250 million a year to be allocated toward low-income housing programs and addressing homelessness. The $1.2 billion collected over the next five years could grow to $5.8 billion through federal, local and private matching funds, according to estimates by the Legislature.

Senate Bill 3 is a $4 billion bond measure that will be on the 2018 general election ballot. If passed, it will help fund programs that assist low-income families with housing, transit-oriented development, farmworker housing and other affordable housing construction with $1 billion earmarked for veterans' housing programs.

"The campaign starts now to get SB 3 adopted by the voters," the bill's sponsor Senator Jim Beall said.

Senator Scott Wiener's SB 35 will streamline the approval process to cut down on red tape on urban infill projects. The bill also contains provisions to prompt cities to meet the housing obligations of their general plans. At the same time, the bill contains measures to protect environmentally sensitive and historic areas, and prevent demolition of some already-existing low-income housing.

Importantly for the State Building and Construction Trades Council and building trades workers, these bills – plus others included in the package of housing bills supported by the SBCTC – contain provisions that provide for construction workers who build the new housing to be paid the prevailing wage. SB 35 and other streamlining bills also require that 60 percent of the trades workers hired on the housing construction projects must be graduates of or enrolled in state-approved apprenticeship programs.

"This housing package addresses the critical need to fund affordable housing and streamline the approval process," SBCTC President Robbie Hunter said. "SB 35, in particular, will streamline the approval process for construction and ensure that workers are paid the area standard of prevailing wage. It also ensures that a skilled and trained workforce that has graduated from state-approved apprenticeship programs will be utilized on these projects. This creates an even playing field for union contractors that are partnered with joint labor-management apprenticeship programs."

Legislators at the signing ceremony said that this year's housing bills were just the beginning and they would keep working to address the state's housing crisis. A March 2015 report by the state Legislative Analyst's Office found that California needs to build 100,000 housing units a year to control skyrocketing housing costs. The Associated Press noted that the $200 to $300 million a year raised through SB 2 is "far less than the $1 billion handed out to communities through redevelopment funds Brown halted in 2012." Matt Schwartz, president of the California Housing Partnership, told the A.P., "That put the state's production into this huge tailspin that we've been in ever since." He added that the new legislation "changes the dynamics and tells the developers they can count on state investment again."

"Today, California begins a pivot from a housing-last policy to a housing-first policy," Wiener said. "We cannot move past today and just check the box, say we've done housing and move onto something else. We have spent 50 years in this state digging ourselves into a deep hole by making it harder and harder to build housing, by coming up with every conceivable excuse in the book why we don't need housing and by putting obstacle after obstacle in the way of new housing."

"It is particularly appropriate that this package of bills was signed today, right here in our city, as we are creating housing at a rapid pace," Lee said. "In San Francisco, we have committed to building 30,000 new and rehabilitated housing units by 2020, and with more than 17,000 units created, we are well on our way to meeting this goal." He also added that he signed an executive directive that will increase the rate of building in the city, allowing us to create 5,000 housing units each year for the foreseeable future.

Assemblymember David Chiu's AB 73 was among the bills signed by Governor Brown. It will streamline construction on affordable housing projects and give local governments incentives to create high-density "Housing Sustainability Districts" near transit, with at least 20 percent of the units reserved for low- or middle-income residents.

"When I got to the Assembly three years ago, I made housing my top priority because I heard from countless San Franciscans who were struggling to stay in their homes," Chiu said. "We have more work to do, but today marks real, meaningful progress."

Chiu, who chairs the Assembly Housing and Community Development committee, is also a co-sponsor of AB 1505. The bill overturns a 2009 court decision that prevented cities from mandating that builders set aside a percentage of apartment units for low-income residents and changes the rules so cities can again implement inclusionary zoning requirements.

David told Organized Labor that critics of SB 35 who say it will streamline market rate housing development are incorrect.

David added, "SB 35 make sure prevailing wages are paid and that will make it easier for the people who build the projects to be able to afford them. Streamlining workforce housing construction will enable the teachers, firefighters and other public employees who keep the city running to afford to live in San Francisco. It's a win-win."

Senator Wiener said at the signing ceremony, "I'm happy to hear my colleagues talk about how this is the beginning because I have some bills for you next year."