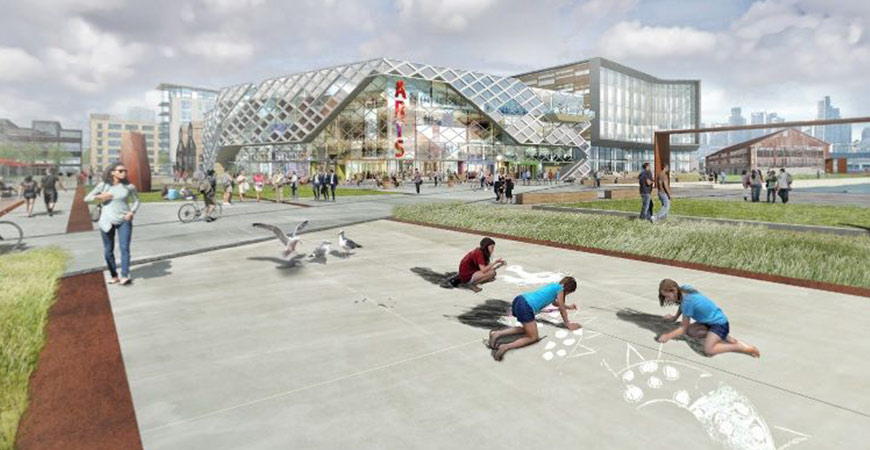 Discussions with Forest City on a Project Labor Agreement Ongoing

The San Francisco Planning Commission approved developer Forest City's plan for Pier 70 at its Aug. 24 meeting. The 28-acre development east of Illinois St. between 18th and 20th streets will include housing, commercial and retail space, and publicly accessible waterfront parks.

At the Planning Commission meeting, Forest City executive Jack Sylvan said the project "is a culmination of a long, unprecedented public outreach process" that has been in the works for 10 years. He said the plan has benefited from public input and community engagement, and reminded planners that San Francisco voters expressed strong support for Forest City's project – passing Prop F last year with 73 percent in favor.

In spring 2010, the Port published its Preferred Master Plan for Pier 70 after extensive study and community planning that called for new development, historic preservation and the creation of waterfront open space. The San Francisco Port Commission chose Forest City in 2010 to develop a 25 acre-portion of the Pier 70 Master Plan area. Port documents described Forest City's proposal as "an innovation cluster that combines high quality office space with 'diverse and inspiring public amenities for the broader San Francisco community' [and] would attract both mature biotech, high-tech and marine sciences companies, and start-up companies, machine shops, prototyping/testing, artist studios, and tech incubators for adaptive reuse of historic structures." Between 6,000 and 8,000 jobs would be created over the multi-year construction and in the commercial/retail spaces, according to the Port. 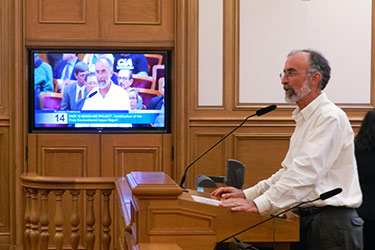 San Francisco Building and Construction Trades Council Secretary-Treasurer Michael Theriault spoke in favor of Pier 70, saying that Forest City is a responsible developer that has worked with the community. - Photo by Paul Burton

Sylvan laid out the key goals and public benefits of the development that will have 30 percent affordable housing, invest $45 million in transit infrastructure, and commit to a 30 percent goal for local hiring. Forest City will also use energy-efficient lighting and heating systems, invest in shoreline protection to accommodate sea level rise, and restore the historic Union Iron Works buildings. The plan also would allow an increase in building heights from 40 to 90 feet (the height of the tallest existing historic structure on the site now), as approved by voters under Prop F. Planning Department staff noted that the Pier 70 plan fits within its framework for developments along the Southern Bayfront, and recommended approval.

Several local residents spoke in support of Forest City's plan, noting that the developer has been great interacting with the community and local stakeholders, has proposed making accessible the shoreline that has never been publicly accessible and has committed to funding local transportation improvements.

San Francisco Building and Construction Trades Council Secretary-Treasurer Michael Theriault said Forest City is a responsible developer that has worked with the community. He said the Building Trades support the project not just for the construction jobs created, but for the same reasons most San Franciscans support it: access to the waterfront, addressing sea level rise, and "the return of employment to an area in the city that was a center of employment for over 100 years," as well as the much-needed additional housing

Tim Waters, Program Director for Young Community Developers, said YCD is excited to work with Forest City on Pier 70. Waters said the project had been improved through Forest City's community engagement and the resulting plan with housing, affordable artist spaces, opportunities for local retail enterprises and jobs would benefit the city and District 10 residents. He noted that the developer committed to fund job training programs and placement services that would employ residents of the Bayview Hunters Point neighborhood.

Charley Lavery, District Representative, Operating Engineers Local 3, said the union is excited about the project that will create a new neighborhood with affordable housing and address sustainability, transportation and sea level rise. He said Forest City had "engaged in discussions with labor and the community to generate a meaningful workforce development plan through the trade unions and union apprenticeship programs."

Peter Cohen of the Council of Community Housing Organizations urged commissioners to support and send to the Board of Supervisors a plan for Pier 70 that includes the maximum level of housing. As CurbedSF reported, "…the precise specs of any eventual development at the pier remain ambiguous, as the city and developer Forest City weigh two different visions of the pier plan." One plan calls for building up to 2,150 residential units, with 1,095,650 square feet of commercial space and 445,180 square feet of restaurant, arts, and light industrial (RALI) space. A second plan would have up to 1,100 residential units, 2,024,050 square feet of commercial, and 441,215 square feet of RALI space.

A few residents spoke against the project, citing traffic impacts that would result from more people living and working at Pier 70.

Sylvan said working with Port, community, and Planning Department Forest City's plan has evolved into a truly mixed use plan centered on housing. "We think we've put in place a foundation for a great future for Pier 70," he said.

The SFBCTC is in discussions with Forest City for a project labor agreement for the Pier 70 project that will guarantee union wages and benefits for the construction workforce. Theriault said he is confident the developer and the Building Trades Council will reach an agreement.