The Strength of Our Solidarity Is Essential to Our Success

By now, you’ve learned of the SF Labor Council granting strike sanction to the San Francisco janitors who are members of SEIU 87. Their President, Olga Miranda, is not one to make empty threats, and as long as I’ve known her, she doesn’t flinch when the bosses of her industry throw a punch. For Olga, fighting for the membership is as much a part of her job as it is her moral obligation.

In this contract, the building managers have dug in around seniority, demanding that union members with at least 25 years’ seniority be “considered” for returning to work and that members with anything less be given no seniority. The Employer Association has essentially proposed the end of the union hiring hall and seniority as we know it. 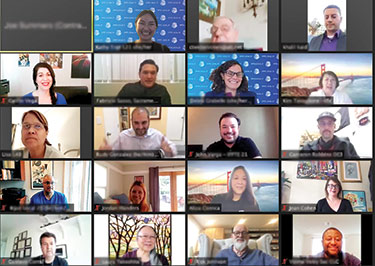 Phone banking into Arizona, via Zoom.

They have overreached, and history tells us they have chosen the wrong city to play this hand.

After all, it was the 1934 West Coast waterfront strike here in San Francisco that took up the issues of the closed shop, the union hiring hall, and an industry-wide contract. I doubt the employers can understand how unified our movement will become should such a fundamental right like seniority be attacked in what is still without a doubt a union town.

Make no mistake: I’m not advocating for a strike. In fact, I believe our unions must do everything in our power to avert a dispute by showing these employers that theirs is the wrong path. If push comes to shove, however, I trust that your union will adhere to the language in its collective bargaining agreement and that your members will act accordingly when confronted with a picket line.

As a council, we will stand in solidarity with the members of the San Francisco Janitors, Local 87.

March is Women’s History Month, and the week of March 7 was Women in Construction Week. While we celebrate our sisters in the trades, we should also take stock of how the pandemic has hit them hardest.

As the economy recovers and schools reopen, we must do our part to make sure women can get back into the workforce and in good union jobs. The sisters who toil on your job site often carry an unfair burden, pulling double and triple duty as they tend to their craft, their families, and their unions.

They are worthy not only of equal pay from employers, but of equal respect from their brothers.

You’ll likely read plenty about how the mayor and other politicians want to spend federal relief dollars in the city, but we should pause to recognize the grassroots power that actually won these dollars.

While pundits tweeted their predictions, union members took direct action. We joined other union members through our labor councils and applied pressure where it mattered. We volunteered and virtually phone-banked working people in Arizona, talking to them about the very real impacts of the American Rescue Plan. We patched constituents into U.S. Senator Sinema’s office and turned up the heat in the weeks leading up to the Senate vote.

This effort complimented a national campaign that won $1.9 trillion for the American people. Together we were part of this victory to win funding for unemployment insurance, veterans, public services, small businesses, school re-openings, and FEMA disaster relief, as well as $86 billion in critical relief for multi-employer union pension plans.

We can be proud that our labor movement delivered this win.