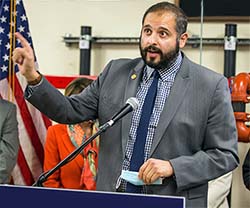 Rudy carried his first Union card at the age of 18 as a member of the International Brotherhood of Teamsters. After serving as a shop steward, he volunteered as a member organizer and learned to campaign in the South, where he saw firsthand the struggle that workers face when they attempt to unionize under hostile conditions.

Informed by his Catholic upbringing's social justice doctrine and motivated by a sense of stewardship instilled by his father’s lifelong career as a firefighter, he found purpose in building power for workers.

In 2008, he was hired as a full-time Business Representative and Organizer for Teamsters 856. He negotiated private and public sector contracts in Northern California, rising to the rank of Director, and was elected twice as Vice President. During his time at 856, he led organizing campaigns that nearly doubled the size and strength of the local union, which now boasts 17,000 members.

At the Labor Council, Rudy lead the staff team to assist affiliated unions with political mobilization, contract campaigns, and strategic organizing. Under his leadership, the Council shored up its finances, hired the first-ever Campaign Director, and revamped the political and affiliate support apparatus. Rudy is most proud of the recently-launched Labor in the Schools program, which will bring labor curriculum and union awareness to a new generation of San Franciscans.

He enjoys spending his off time with his family in Oakland, where he resides with his wife, Sarah, and their three children, Zoe (12), Jules (10), Isaac (3), and their English bulldog, Oliver.

Our Solidarity Leads to Significant Wins Worth Celebrating. Let’s Keep It Up.

Why Advocating for Transit Infrastructure Is a Top Priority

With the $1 trillion Infrastructure and Jobs Act a done deal since November, billions in federal dollars are now beginning to filter down to state governments throughout the United States.

While we’re most likely to see images of celebrities and elected officials flashing on the screen as Black History Month progresses, few — if any — will honor the legacy of trailblazing Black labor leaders of America.

As Workers Who Fight for Workers, the Building Trades Can Play a Key Role in Fortifying Democracy

It’s been a little over a year since the events of January 6, 2021. That day, the U.S. Capitol was attacked by a violent mob of Donald Trump supporters ginned up with rage after having been systematically fed the lie that their preferred candidate was cheated out of a second presidential term.

As 2021 draws to a close, a disturbing number of members and apprentices remain out of work and in dire financial straits. The persistently high rate of unemployment makes it clear that the impact of COVID-19 is still very much with us, and the toll that this pandemic has taken on our industry across the crafts continues to cut us all deeply.

One of the Most Consequential Bills in Modern History Just Became Law, and We’re About to Start Transforming America for the Better

On Monday, November 15, President Joe Biden put his signature on the Infrastructure Investment and Jobs Act, making it law.

Looking With Skepticism at the Institutions Surrounding Us, and Asking Them — and Ourselves — the Tough Questions

Returning to Normal at SFUSD

As our local schools navigate the pandemic, inequities reveal themselves. Disparities in funding are becoming more obvious, as are the challenges of truly addressing today’s educational needs — both in terms of resourcing and modernizing the institutions in which our children spend their days and meeting the demand for vocational education with a pipeline to apprenticeship.

Remembering 9/11 and Beating Back a Nasty Recall Attempt: Labor Does Its Part

The 20-year commemoration of the 9/11 attacks has come and gone in the national news cycle. But for so many survivors of that tragic day in American history — and their family members and friends, as well as the friends and family of the 2,996 people who died during the attacks — 9/11 is much more than an occasion to relive through news packages and op-ed columns once yearly.

We Need to Get Back to Work, and We Need to Live in a Healthy Society Again. Therefore, We Need to Be Vaccinated.

In the time I’ve spent working in the labor movement, I’ve been lucky enough to pick up a few skills in fighting for the kinds of mandates that unions and councils have been winning (and sometimes losing) for centuries.

To Win in This Movement, We Must All Be Leaders Who Form One United Front

Robbie Hunter: We Were Lucky to Have Him

The head of the State Building and Construction Trades Council of California, Brother Robbie Hunter, has announced his retirement. Since 2012, Robbie has been our tip of the spear in Sacramento, fighting on behalf of 180 local unions that represent more than 450,000 skilled workers, including 68,000 apprentices.