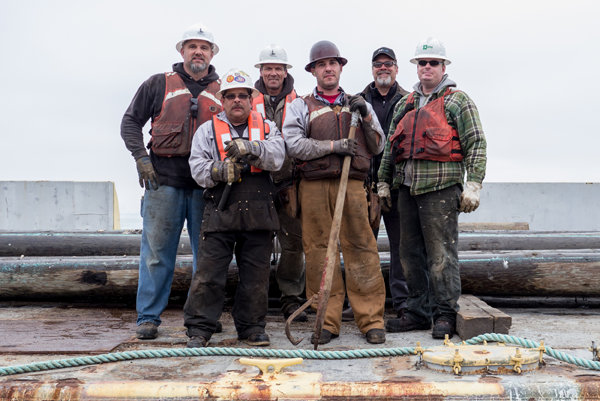 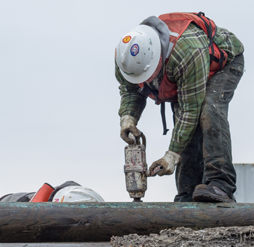 Drive down Third Street past Mission Bay, past Dogpatch, then out Cargo Way past the gravel yards, and you’ll come to what feels like the end of the world. In the cold, grey fog, where the land meets the bay, members of Pile Drivers, Divers, Carpenters, Bridge Wharf and Dock Builders Local Union 34 wrestle into place telephone-pole size timbers they are using to repair the docks of Pier 94. A seven-member crew, including 6 pile drivers and an operating engineer, work with a pile-driving hammer and a crane mounted on a derrick barge that they move up and down the San Francisco waterfront repairing piers. 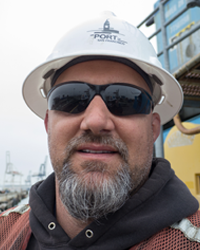 Replacing wooden piling is almost a lost art. Most ports are now built out of concrete, but San Francisco wants to keep the tradition of the heavy wood. We drive in the heavy timber piles and then frame the new lumber to fit the old. There’s a lot of manual work with axes and chain saws. The pilings are all different sizes. They are basically trees. They can be 35 to 100 feet long and vary from 2 feet to a minimum of 12 inches in diameter at the end.

It’s time consuming, but on a good day we can replace 5 to 15 piles, depending on if they are in one location or if we have to move around. We are currently at Pier 94 next to the Hansen gravel yard. The weight and pressure of these huge gravel ships, combined with the marine environment and weather, takes a toll on the pilings. Maintaining the piers is a never-ending job.

We’re proud to be maintaining the heritage of San Francisco and enjoy the opportunity to work here every day on the water. I couldn’t be happier. And the best part of the job is the camaraderie of the crews, not only the pile driving crews, but all the other trades we work with as well. We’re almost like a machine, where everyone knows each other’s next steps. It’s a family. We take care of each other and we keep everyone safe. 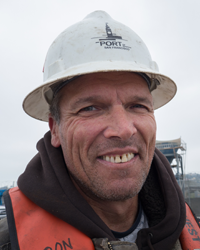 It’s fun being outdoors and putting the docks together. It takes some skill to drill a hole in a big, round piece of pile and be able to make it all the way through without hitting any obstacles or crisscrossing another bolt or hitting anything else, and then being able to bolt it up. The trick is watching out for each other’s back. And remember, what goes up can come down. I was taught to always keep the head up.

I used to run a landscape business, did a little retail grocery store work. But things were slow, and a neighbor who’s a journeyman pile driver asked me if I could read a tape measure. I said yeah, and he said go down and sign up for the pile drivers. I got into the program, did my four years. There were times I wondered if I was going to cut it in the business. You’ve got to make a name for yourself to make sure you get the call back.

You need a good repertoire on and off the field. Be on time and Johnny Hustle, but do it safely and be there when it counts most. It’s a team thing. I found the needle in the haystack. I’m really grateful. They pulled me out of a moment. The Port of San Francisco is a good place to be for a pile driver. I hope I can finish out here and call it home. 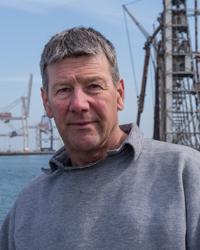 One of the biggest dive jobs I worked on in Local 34 was the Shasta Dam project. We installed huge water intake channels that sucked cold water from the bottom of the lake through the turbos to make hydroelectricity.The process of generating electricity warms the water, and they couldn’t just pump the warm water into the Sacramento River.

So by using the cold water from the depths of the lake they could run the turbines longer without raising the temperature of the river.The channels went 400 feet deep. We used a mixture of helium and oxygen for breathing instead of air. By removing the nitrogen from the air you can stay focused longer and it helps with the decompression.

I started diving 25 years ago and worked all over the world, including the oil fields of East Africa, North Africa, and Saudi Arabia. In places like that you are on your own, no union, and no protection of any kind. Eighteen years ago I ended up in San Francisco and joined Local 34 and went to the training school in Pleasanton. I’m really grateful for everything the union did for me. When you work in the places I worked before, you really appreciate the union. 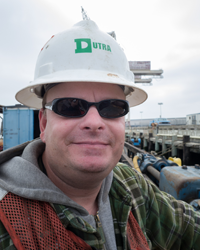 My dad, Andy Adams, was a pile driver, and he brought me up through the ranks. He was a foreman, and we worked together from the time I was an apprentice through journeyman. He taught me all the ropes, and now I’m on my own. We worked together side-by-side on the Bay Bridge and the Carquinez Bridge.

He taught me to always be aware of your surroundings. Even when it looks simple, death is lurking all around. In a split second something can come flying at you. You need to constantly be on your toes. My dad’s retired now, but I talk with him every night about the job and what we did that day.

He still gives me good input, and I value his assessment and all those years of knowledge. He may be retired, but he still has his hand in the game. I’ve met a lot of great people who helped me out, not just my dad. Pile drivers are one brotherhood. We look out after each other. The San Francisco Port is special, and I hope to work here for many years and make it my career. 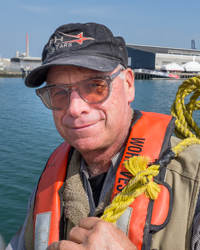 I’ve worked for the Port since 1989, and I’m pretty close to retirement. I did a lot of pile driving, welding, and then diving, but now I’m too old and broken down to dive.

I had both my shoulders replaced, so I assist the divers. You feel a part of history working on the bridges and rebuilding the docks. The infrastructure is just so old. Even some of the concrete piers are over 100 years old. Once you rebuild them right, they last decades, especially if you wrap the piling.

The wrap provides a plastic barrier to keep the water away from the bugs. The bugs need water or they die. We’re going back to wrapping and re-wrapping some of the old piles, some of which are 60 years old. Underwater you do everything by feel. You can’t see. It can be challenging. Like driving nails. We use a short hammer, because of the water resistance. It takes some technique. You have to really focus on what you are doing or you get a reminder. Ouch! 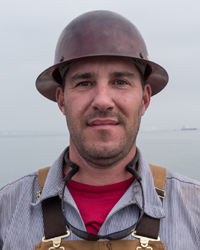 Some people say, “You work for the Port of San Francisco?” Well, it’s not what they think. It’s a different world out here. Every day can be different, and we have to figure things out ourselves. We can be driving pile and then get a call to help pull a boat out of the water or fix the bridge to a restaurant.

We do a lot of falsework for the other trades. When there is an emergency on the waterfront, from oil clean ups to search and rescue, we often get called in. We’ve even been deputized by the police to look for bodies, both on top of the water and underneath. That was pretty unnerving.

One time a whale was stuck under the pier. There is no play book for removing a whale. You just have to figure it out as you go. It took a lot of rigging and boats. Whatever it takes to keep the waterfront running, we help out. We’re all a special family out here. 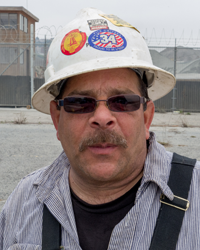 The best part is being on the water. I’ve been working on the water for over 30 years and 27 years at the Port. When I first started we used steam rigs built in the 1940s.

They had boilers on them and stiff-legged A-frame booms. Today it’s a little easier with the lattice boom, and these new rigs are air powered. They’re not quite as powerful as the steam rigs, but they are better for the environment.

It’s hard, heavy work, and you have to be aware every minute.We’re working around heavy objects and metal cables that get rusty from the water and snap. We watch out for each other. It’s like having eyes in the back of your head.