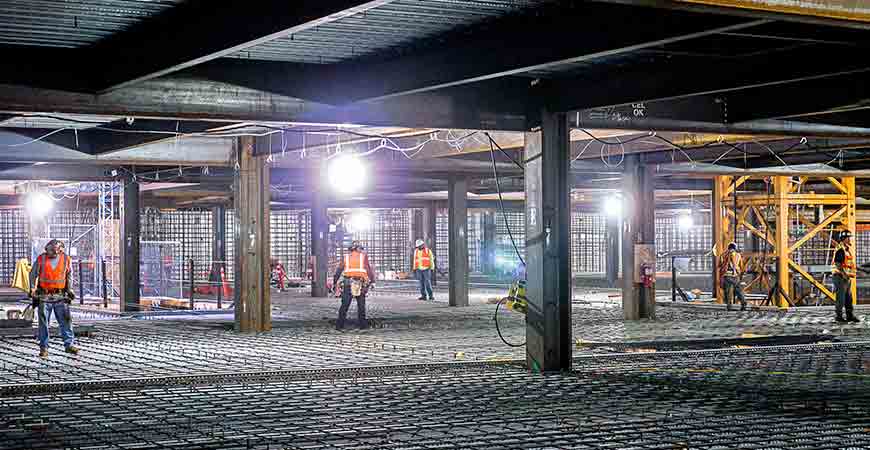 “You don’t want to put a brand-new guy up on a wall that he may fall off. You want to make sure he is trained properly and knows how to operate the tools and has been certified to use those tools. You get a new guy in here and you take them step-by-step. We don’t want to put them in a situation where they might get hurt.

Some of them catch on real fast, and some of them you have to hold their hands.

“Watching apprentices progress is pretty rewarding. I’ve made quite a few good friends just by teaching them a little bit. I remember the people who instilled their wisdom in me. I’m still good friends with them. It’s very rewarding on a personal and professional basis.”

The Van Ness and Geary Campus of Sutter Health’s California Pacific Medical Center was still a dirt pit when we visited the site at the beginning of the year to photograph laborers preparing for the foundation concrete pours. When we revisited the site this fall, the metal structure had risen out of the ground and grown several stories. Iron workers were wrestling multi-ton beams suspended in the air by cranes and fastening them in place. Other workers were laying down metal decking and installing rebar.

One hundred and twenty large, red, iron panels are being installed in the wall structure. These viscous wall dampers are based on a technology developed in Japan to brace the building during an earthquake. This is the first time the technology is being used in the United States. HerreroBOLDT, the project leader, is doing everything it can to build a hospital that will survive and continue functioning during an emergency. 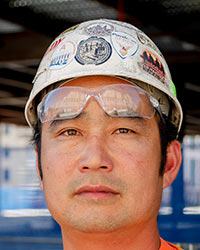 My main thing is making sure my guys go home the same way they came to work. Working on the beams is very risky. There’s lots of potential to get hurt if you don’t work safely. Especially with these hot days. The sun is above you and then the sun is in front of you. It makes it hard for the welders. We work on top of the decking connecting all the structural steel. We need to wear safety glasses and welding hoods, and you start sweating. Sometimes you can hardly see anything because you’re so sweaty and the glass gets fogged up.

We make sure the guys are getting enough water. If they are feeling too much stress, we make sure they stay in the shade and get some water and rest for maybe a half hour to an hour before they continue on. If they feel anything, they should not continue working in the sunny shining area. We have them take turns and work slowly. We don’t want them to cut corners or take any chances. No hurry to get things done. They need to just do what they can do in the heat. It’s hard.

When the rainy season comes it can be even worse. You can’t do any welding in the rain. You can risk getting electrical shock, and the steel is pretty slippery. Sometimes we have to shut down during the rain.

I’m just thankful to my crew and my boss for all the support they give me. They all care a lot about safety. We have lots of meetings on this job, every single day at 8 o’clock, a foremen’s meeting and a safety meeting. 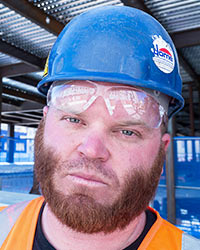 The trick is doing your homework – digging into the drawings and making sure that you know what is going on before you get to work the next day. You need to be 10 steps ahead of your guys, and to do that you need to spend a few extra hours on the drawings, learning the job from the ground up. Spending that extra time allows you to be okay later. Otherwise you can shoot yourself in the foot.

On this job the plans are pretty well organized. We use iPads and they keep everything up-to-date. You can click on a section cut-in on the drawing plan and it will open up any RFI’s that have come through. That use of technology is huge. You need the information right away. You don’t want to build it based off old drawings and then find out the drawings you have were updated.

I started out in the office doing scheduling. Then I got to do some detailing and talked to the guys working in the field. They seemed more like me. So I talked to my boss and said I want to go out there and play with those guys. They got me in the apprentice program.

We have a lot of fun out here. It’s hard, backbreaking work, but it’s fun. It’s a brotherhood. It changed me. I was a little nerdy kid and now I’m Red Beard the Brute. 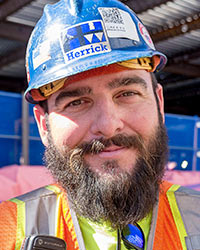 The trick to being a foreman on a job like this with a lot of apprentices is to think two days ahead. A lot of the guys are in school, and you have to pull them off one crew and put them on another. You got to know how to rotate guys around who are qualified to be on the iron and are not scared of heights.

We’re using these new seismic dampeners similar to what they use in Japan. You can see the red plates on the perimeter. This is their first time use in America. The two plates interplay during an earthquake and the viscous material inside the plates dampens the shock. We have to put 120 of them on the building. The installation was a little slow at first. They have a lot more bolts to install and they are very heavy.

I’ve been with Herrick for eight years and an ironworker 12 years. I did a lot of bridgework and retrofits. The biggest change I’ve seen in the industry is that safety standards are getting stricter every year. It slows the job down, but our injury record is a lot better and that is important. This has been the hottest week of the year, and we’re making sure all the guys stay hydrated. 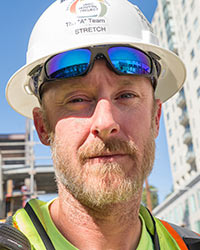 Being a rigger is fun. You get to work with crane operators. They are at the beginning of the hook and we’re at the end of the hook. You get to know the guys over time. You know what to expect. Each operator has their own way of operating the crane, and you just find a happy medium with each one. It’s all communication. Sometimes you have radio issues, and then you go to hand signals. As long as you have line of sight with the operator, you can always communicate.

I set the choker ties and make sure the load is safe. You got to know your stuff. First you go through the apprentice school and then work in the trade for years. It is a pretty good program. Now I get to work with apprentices, teaching them the do’s and don’ts that I’ve learned from all these years. The most important thing I teach them is to stay alive – you got to know your surroundings.

How did I get into iron work? I was just driving down the freeway one day and saw some guys doing iron work. The next day I saw them welding and I thought, that’s what I’m going to do. 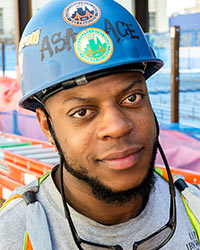 Being a decker is definitely a workout. You are constantly moving, bending over or lifting heavy weight. We come in before the rebar guys, and then they put their rebar on our deck and then pour the concrete.

Safety is number one. Keep your eyes open and make sure that you stay hydrated in the heat.

I wanted to be an architect and I wanted hands-on building experience, so I got into construction. Iron work was booming at the time and a friend got me a sponsorship. It was a good decision. I was welding before, so I figured I could get my certs quickly.

I like having a hand in the actual project. The deck is cool, and I like the structural part of iron work. That’s even more my interest. I like welding too.

I like staying active. I’m a little guy, but I’m a pretty tough little guy. I can always step up to the plate and carry my own weight. And I can get into the little spots and do the work where the big guys don’t fit. 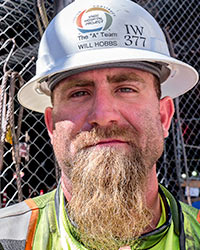 It’s great working on this job with qualified people. It’s important working as a rigger to be able to trust the people you work with. You don’t want anything to fall off. The trick is to pay attention, stay alert, and make sure you remember all the things you’ve been taught and learned over the years of rigging:

Out here we are one big team Whether you’re carpenters or laborers or concrete masons, we are all here to do a job and make sure it gets done properly and safely and we can all go home to our families at the end the day. 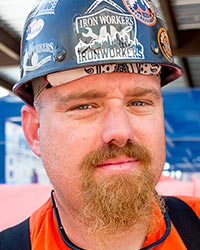 Working on the deck is a special grade of iron work. It’s one of the most dangerous parts, and a lot of people don’t want to do it. You have to figure out the placement and then spread the decking material over the open iron and then puddle weld it down using electrodes.

My family have all been ironworkers. I grew up hearing all about it at the dinner table. It’s funny. When I was a kid and we’d to go to the city, my dad would point out all the buildings that he worked on, and now I do the same with my son. That’s pretty cool. 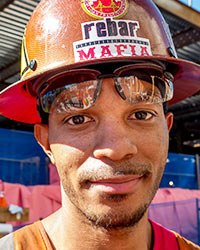 Today we’re learning to do wall foundations. The trick is to make sure the spacing is right. They have a detailed schedule of what rebar goes where.

The best thing is meeting different people in the different trades.

My dad was with Operating Engineers Local 3. I looked into all the different trades, and this one caught my attention. I’ve been an apprentice two years. The most exciting thing is working. I like working and knowing that I’m being a part of something.