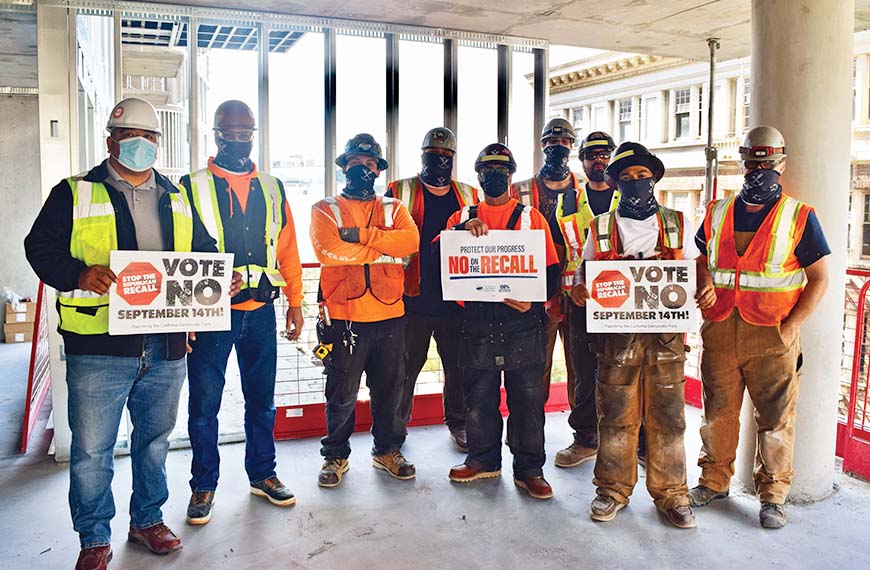 No building is ready for occupancy until the Sprinkler Fitters have covered all the fire safety bases. One of the many major Bay Area projects Local 483 members are currently tackling is the new headquarters of another union: that of Local 38 Plumbers & Pipefitters. A crew of Sprinkler Fitters employed by Westates has been busy at the new office and mixed-use project at 1629 Market Street.

The total project entails the construction of multiple buildings, including a new 30,000-square-foot union hall, 500 units of housing, and 100 units of affordable, supportive housing for individuals experiencing homelessness. Additionally, there will be 17,000 square feet of neighborhood-serving retail space and a 33,000-square-foot public park. Strada Investment Group is the developer and Suffolk Construction is the general contractor.

The job’s location in the heart of San Francisco makes for a difficult commute for some fitters who live far away, but the panoramic rooftop view is a significant perk, especially for members who have worked mainly on single-story buildings. A healthy ratio of apprentices to journeymen at the jobsite means that necessary skills for the dynamic job are passed on to the newest fitters. Having laid out sprinkler lines for previous floors, the team’s muscle memory is kicking in to get the job done.

Check out the photo gallery 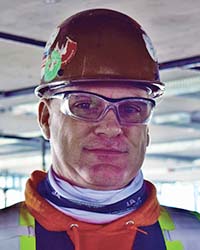 Since 2009, I’ve been in the union. I’ve been a sprinkler fitter since 1987. I owned my own company for 20 years with my brothers. My grandfather and father were union fitters, but due to circumstances when I was starting the company, it was easier to be non-union at that time. It was just a family affair, and that’s how it continued for some time. Then work got really bad and things weren’t working out, so that’s when I joined the union.

I knew all about what it means to be a union fitter from my father: the insurance, wages, retirement. I’ve been treated very well. I’ve prospered from it — I make more money, so I have better insurance. As opposed to non-union, the projects I work on now are better-managed, and there’s a higher quality of work. Everyone learns the trade the right way, so everyone on the job is knowledgeable. With non-union, some people aren’t trained properly and jobs aren’t managed properly, safety-wise. Union jobs are just better all the way around. 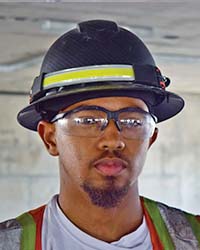 I got into the trade through Cypress Mandela, a training program out of East Oakland. I was there for about a week when [Local 438 organizer] Jeff Dixon came by the hall. I already had an idea of what the Sprinkler Fitters were about from a family member, and so I joined in late 2018 and have been rocking with it ever since.

I’ve gained a lot of discipline through the apprenticeship program, and I’ve met a lot of really great people. I really do like this career. I haven’t had a lot of time off since I started. Since COVID hit, I’ve only had about three days off, which is cool, because some guys are sitting right now.

It’s important to me to be part of a union because I’m young and I need the benefits and time to grow a pension. Non-union fitters don’t get as many benefits, and they also don’t get the retirement package that we get. I was 19 when I started, and now I’m 22, so by the time I retire, I’ll have a really big pension. I’m very excited about that. 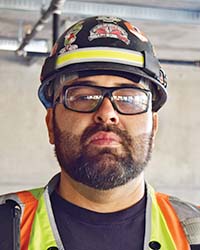 I just turned out in August, so it’s been roughly five years. I had worked in the construction industry as a Laborer for 13 years. I learned about the Sprinkler Fitter trade by being on jobsites — seeing other trades, the work they do, and the type of training they get. I have a buddy who’s in the trade, and he’s the one who told me that I should fill out an application. So, I found out about the opportunity through word-of-mouth and seeing other jobsites.

They don’t take advantage of you as a union sprinkler fitter. It’s great pay, compared to what a non-union fitter makes, and you have someone to back you up at all times. You’re not letting anyone walk all over you; you always have someone to call if you have an issue or if you don’t think something is right. It’s a mutual benefit — you help the union and the union helps you.

My motto is that you have to take pride in the work you’re doing no matter what the job is. You want to give it 110% at all times. 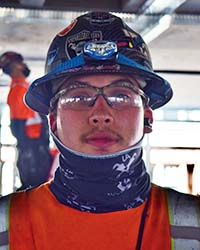 It began with my doing personal research on all of the different trades. I found out about the Sprinkler Fitters on CalApprenticeship.org, and as I sifted through some research and looked at the benefits, retirement, and fringe benefits, I decided that Local 483 was the best one.

I’d never done construction work before. I had previously worked in a warehouse, but I was very familiar with all skilled trades work. I definitely recognized the importance of being union, and I’m really glad I joined for sure. The benefits are way better than non-union. The union takes care of us, looks out for us, and they put us before everything else. You don’t get that with non-union. 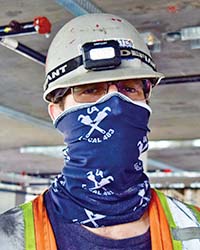 I have family in the trade — my cousin and dad work for Cosco. I worked non-union before this, so I’ve experienced both aspects. It’s different, even in terms of something as simple as safety. You also get benefits and vacation. We have four days off this weekend. With non-union, you’re not getting anything like that. Working non-union, I also didn’t get compensated for travel time. It’s little stuff that all adds up.

My dad, who’s non-union, was the one who really encouraged me to go union instead of just getting involved with a company. He told me if I want to retire with a pension, I need to go union. He wishes he had done the same. 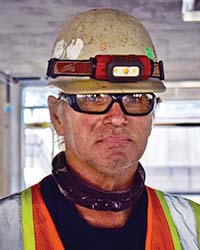 I’ve been with Local 483 since ’99. Before that, I worked as a stocker in the medical supply field. Our superintendent for Westates was the one who got me in. It was a money situation, and I had gotten tired of all the political stuff and wanted a better job.

I like it because they have your back. When things are slow, they give you the opportunity to travel to go work somewhere else. For a small local, we’re pretty strong. We work in all counties of the Bay Area, so you can move around and aren’t working in the same place all the time.

Being able to show the younger apprentices the tricks of the trade helps them become better journeymen so they can help train other apprentices coming up behind them.

I’m going to be retiring on April 30. I feel like I’m in a good position to retire. I spoke with the union reps and they said everything was good to go, so I don’t have to worry about what’s going to happen. The pension and medical are paid for.

The important thing is to enjoy what you do, take your time, don’t be in a hurry, don’t be afraid to ask questions. Work smart and stay safe. The speed will catch up with you as you progress. It’s been a good, fun trade. I’ve enjoyed it.