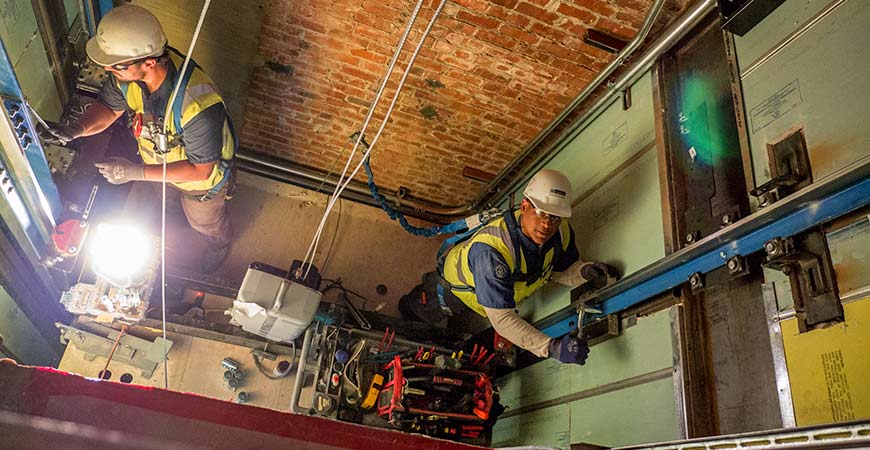 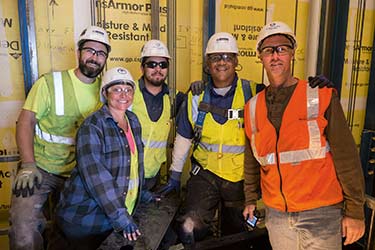 On Third Street, across from the Mission Rock Muni stop, the historic 1920s Fire Station Number 30 is going through a major renovation. But renovation does not fully describe what is taking place. The old two-story red brick firehouse will be surrounded by a six-story, 260,000 square-foot, glass and steel structure that will be the new San Francisco Public Safety building. The building will include a fire station, the headquarters for the San Francisco Police Department Southern Division, and the command center for the city during natural disasters. The project has a budget of $164 million. Pankow is the general contractor.

On the Job Site visited with members of the International Union of Elevator Constructors Local 8 working on the renovation for ThyssenKrupp Elevator America.

There’s a lot of pride in working on the restoration of any historic building. That, combined with the enhancement to the city’s safety during emergencies, makes this an especially inspiring project. But with that goes the responsibility of making sure everything will work at top efficiency during an emergency. “You never want the public to get stuck in an elevator, and that is even more important in a public safety building during an emergency,” stated elevator mechanic and adjustor Mike Habben. Mike was one of the team of Local 8 members working on the project as they installed one elevator in the old firehouse and seven in the new building.

The juxtaposition of red brick with curtain wall is not the only unique feature of the job site. Summer Habben is not only one of the few female elevator mechanics, but she is also the foreman running the job. 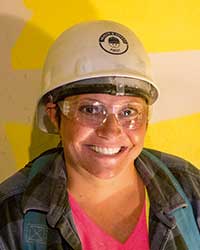 The best part of the job is being able to show off your craftsmanship and take pride in your work. You want to do the best for your company and make sure you have a good safe elevator at the end. The key is taking your time, being efficient, and making sure you have everything together before you start.

Being a foreman takes a lot of work. You have to be organized and motivate your crew to do their best. You motivate them by being motivated yourself, and they follow in your footsteps.

Sure, there are nights I have trouble sleeping, but the trick is knowing what you’re doing and having a daily plan and being prepared for the next day.

It’s inspiring working on an old building, knowing you had a piece of it. Working on a public safety building and knowing you are contributing to the safety of the city is really special. 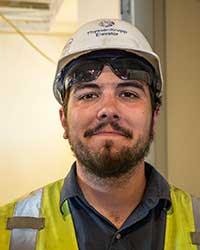 The coolest part is getting up in the morning and knowing I’m building America.

Once you get the car running, you can see all the hard work you did really paid off.

I’ve been working in the old firehouse with all the red brick. It’s extra red when you drill into it and turns your shoes a different color. I don’t even bother trying to keep clean. I don’t mind, I’m a dirty dog. I like working hard with my hands and getting dirty.

Before this I worked for a nonprofit in Marin County. I did everything, even maintaining their cars and all the stuff like that. But they had no budget. It was like, “Here’s five dollars. Fix it.”

Here you have management behind you and great coworkers. The union’s awesome. Everyone is welcoming and helps you out if you have any questions. It’s a family.

My stepfather is in the trade and he’s second-generation. 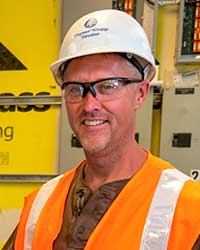 You have to make sure all the switches are working and it’s safe for the public to ride. That’s the number one concern. You always want to make sure that no one gets stuck in an elevator. You have to build it so that even a two-year-old can operate it. It’s the only form of transportation a two-year-old can get in and operate. They can’t drive a car, but they can walk into an elevator, push a button, and go to a different floor.

The best part is figuring things out. There is a fix for everything, whether you know it or someone else knows it. It takes a lot of wrench work and electrical, but it’s also computer software. You go into the control room and plug a laptop computer into a nine-pin connector, and it gives you all the inputs, outputs. You can see what all the different circuits are doing. In the old days the elevators were more controlled by relays, and a lot of our work involved adjusting and maintaining the relays. Today they are controlled with software.

The firehouse was a little challenging because the hoistway was so much smaller than it would normally be. And it got even smaller with all the reinforcements for the earthquake retrofit. There was very little elbow room. It was very tight to work in.

This is a San Francisco public safety building where the heads of the Fire Department and Police Department will plan out how to deal with emergencies. It’s a good feeling knowing you’re helping out the city. If there’s a 9/11 in the city, this will be the communication center. So we really want to make sure everything works. 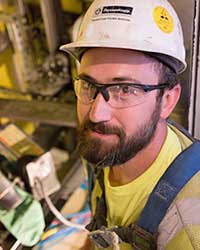 The best part of this job is being able to work with a strong woman who really knows her stuff. She’s amazing. It shocks some people that she is so together. They don’t expect it.

She knows exactly what’s going on and tells you exactly what needs to be done. She can tell if your pipes are off a sixteenth of an inch from two floors away. She will let you know and give you the time to go back and fix it. Working with her, you learn craftsmanship and get a sense of pride. You want to make sure everything looks good so that if somebody comes in, they’ll say what a good job you’ve done, and that it’s not just been thrown together. Today I learned that it is faster to take your time and do something right the first time.

It’s pretty inspiring being able to put something together with your hands and then seeing the construction cars you built moving people up and down as they work on the building. Then you remember how it all started. It was just a bunch of stuff in a bunch of crates, and now you can press a button and go from floor to floor.

My family is in the trade, my father-in-law and both my brothers-in-law. I kind of married into it. At the family gatherings all the women yell at us because all we talk about are elevators. And now I can be part of the conversation. I’ve been waiting a while. At the next one I’m going to brag about that I’m working with a woman who knows more than most of the men. 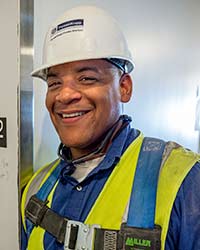 The biggest thing for me are all the people I get to work with. It’s a pleasure coming to work, and I like all the aspects of the elevator trade. We’re not just one dimensional. You get to put in the rails, stack them, weld them, put in the piping, and then wire everything up. A lot goes into an elevator. You feel you really did it at the end. It’s very rewarding when the foreman comes in and looks at your work and she likes it. Then the adjuster comes in and does the final adjustments, and your elevator runs great. It’s a lot of hard work, but worth it.

The best thing about Summer, the foreman, is that she’s hard but fair. She corrects your work. If you did something wrong, she lets you know what it was, and then you redo it. She wants to make sure that next time you get it right the first time. When you work for her, you feel like you learn something every day. I leave work knowing I’m a better elevator mechanic, and that’s what it’s all about. She’s very organized and makes sure everything is ready to go.

In this job we learned how to deal with all the adversities of an old building. Some of the bricks in the firehouse were so old that when you drilled into them they didn’t hold up.

I love working in the city. I am a San Francisco native, so I know that when I drive by this building six months from now, I’ll feel that I’m part of something bigger.