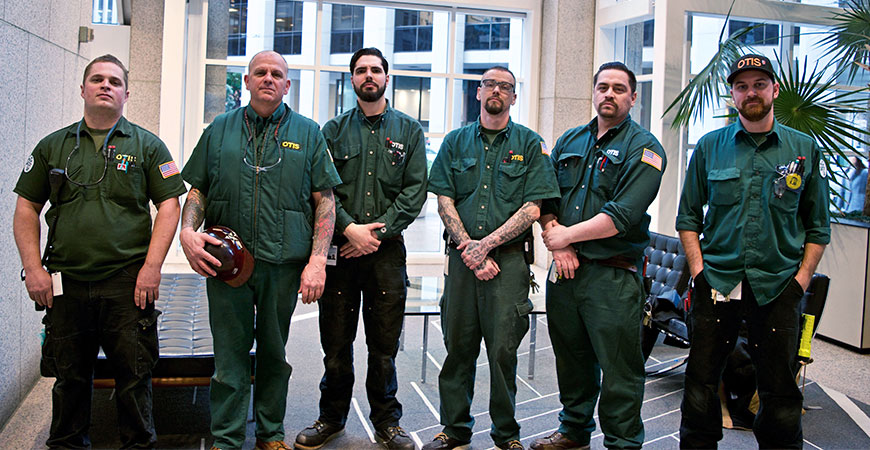 Local 8 elevator constructors employed by Otis Elevator Company have been busy working on a modernization job for 101 California Street, a 48-story office tower located in the Financial District. The building was constructed in 1982 with the existing elevator system just as old, put in during a building boom of an earlier era. With other upgrades planned for the tower, a complete overhaul of all the elevators was overdue, and the Local 8 crew was ready for the formidable task of replacing 32 cars.

The modernization project has involved installing a brand new technology called SkyRise for high-rise elevator systems, and represents the first time the system has been used in San Francisco. The new technology ensures greater reliability and smoother function, employing a motion-controlled algorithm. With both apprentices and veterans of the trade on the job, using the latest technology means everyone is in the learning trenches together. Many long days of troubleshooting are followed by a shared satisfaction borne from the successful team efforts.

With the building still occupied, the work has been done in sections to minimize disruption until fall when the job should be complete. Art work adorns elevator entrances not in use, while ample time is taken for the finer details such as equipping all elevator entrances within the tower with comprehensive braille way-finding signage. 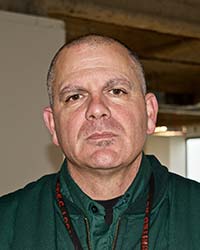 Most of the work I’ve done in San Francisco has been high-rise mod work. This is the fist mod in San Francisco with this new SkyRise product, so there’s been a learning curve, but it’s coming along well and it’s more user-friendly because there’s less wiring. There are 29,000 different inputs and outputs. You can do anything with this product in terms of functionality and features you want to turn on or off. It also makes for a faster installation with less wiring. It’s a nice product — no glitches.

I started with Local 8 in 1982, it’s a great trade. I’m the vice president of Local 8 and have been for about 12 years. What I’d like to see is more membership participation. We’re trying to see if we can spark more interest by moving the meeting location around a little bit.

I teach apprenticeship classes on Monday nights so I’m trying to get those guys involved, but it’s tough working for eight hours and then going to school for four hours — but it’s important to give back to what provides for you and your family.

Back in 1982 there was a lot of work and everyone was shorthanded. Now we’re shorthanded again. Crew turnover has been high and that’s been a challenge, but these guys are new mechanics and they’re doing a fantastic job. 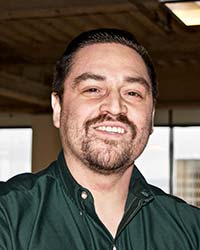 Before I was with Local 8, I was in Local 104 Commercial HVAC Installers. I ended up working there for a year and a half and found out there was an opening with the elevator constructors, so I gave it a shot and here I am. I have family in the trade but it’s still something new for me and didn’t know a lot about it. I’m currently taking electrical courses that are very detailed.

I love Local 8. Being a member has given me opportunities I didn’t have before. There’s great pay, great benefits and I would recommend it to anyone interested in the trade. I’m very happy.

I’m a helper for one of the new mechanics. I switched from new construction to modernization recently, so I’m in the process of learning how to do a car from the beginning to end. I’ve been able to apply some of the things I learned working on Salesforce Tower to this job but mod is more detailed, you have to think a bit more than with new construction. You can run into certain issues on one car and then things can be completely different on another car. 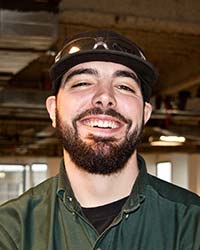 All the men in my family are elevator constructors — my father, my brother, my two cousins, both uncles, my grandfather and his older brother. I got in because I wanted to do something I knew I would be proud of and there’s a lot of pride in putting an elevator together; there’s so much work that goes into it. It has a bit of every trade in it and there’s a lot to learn. I love to learn new things.

I make it out to every meeting to stay involved with the Union. Being a member gives you the assurance that you’re not going to get taken advantage of. You’re going to get paid a fair wage for the work you do, plus you get health and dental benefits and are taken care of. The thing that I think is the most important is that the Union makes sure that we’re safe — no employer is going to have us cut corners and put our lives in danger. Local 8 is especially really big on that, and they go out of their way to make sure we’re safe. 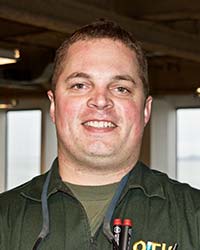 I was a union carpenter for 10 years before becoming an elevator constructor. I’ve been with Local 8 for three and a half years. I wanted something a bit more hands-on, more technical. I have a friend who’s been with Local 8 for about 20 years now and he had told me about the apprenticeship opportunity.

The apprenticeship is excellent. They’re providing more practical instruction beyond just written material, which I like. The class I’m in now has hydraulic simulations and we had to tear down hydraulic valves so it’s very hands-on. We also have a lot of good teachers.

The benefits of being a Local 8 member are great. I go to meetings every other month because I enjoy the sense of camaraderie and have networking opportunities. It’s a really solid union — there’s so much support. 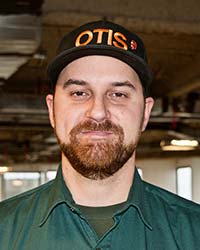 I originally got into the trade just before the Recession hit and was then laid off and ended up working for the Union Pacific Railroad — something I had always wanted to do. I just came back last November. This is a better trade. I have to do all the schooling over again because things have changed so much, the technology has changed big time. Overall I think that things have improved.

In addition to helping me provide for my family, the competitive pay helps for surviving in California. It also gives me the opportunity to do something I enjoy. As long as you’re willing to learn, there’s someone who’s willing to help you. For this job I’ve been putting up all the braille for the blind — it’s on about 400 openings; I’m on my last rise. 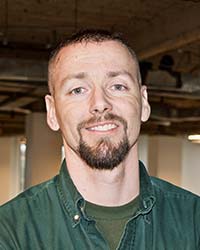 I’ve been with Local 8 since 2013. My brother and I heard about the trade and we went for it and applied. The Union has definitely treated me well this past year. The benefits are outstanding. I try to make it out to meetings when I can because it’s important to stay current on necessary information and get feedback.

I got started on this job last year and it’s the first high-rise I’ve ever done. We’re upgrading all the old equipment and putting in everything new for the whole building. We’re using new equipment that I’ve never worked with before so there’s a lot to learn every day. I’m a new mechanic, and this job has been very different — you never stop learning.