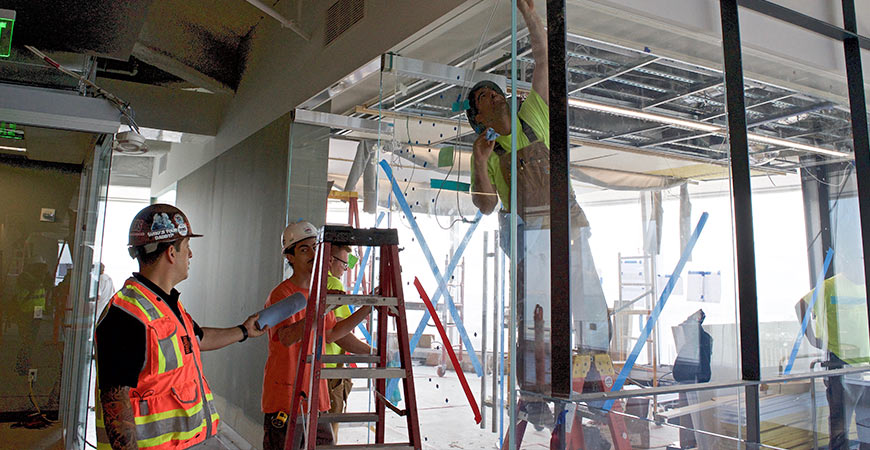 The iconic Salesforce Tower at 415 Mission Street was officially opened for business as of May 22. However, the Glaziers have still been busy working on some crucial finishing touches for several of the lower and upper floors. Two small teams from the Local 718 employed by subcontractor Mission Glass and general contractor Hathaway Dinwiddie have been putting in long days over the past few months installing high quality glass for conference rooms, offices and staircases. Though much of the tower is already occupied, the Glaziers efforts will get floors 4 through 30 as well as 45, 46 and 59 ready for tenants such as CBRE, Vy Capital and Salesforce. For much of the crew, this project is the most high profile one they’ve tackled in their careers.

At 1,070 feet, Salesforce Tower is the tallest in San Francisco, the second tallest building west of the Mississippi River and the twelfth tallest in the U.S. Contained within its 61 floors are 1.4 million square feet of office space packed with amenities and a natural ambience. The tower was developed by Boston Properties and Hines and constructed by general contractors Clark Construction and Hathaway Dinwiddie utilizing 100 percent union labor. Sometimes working late into the night, Glaziers mentioned that they can sometimes see reflections from the LED light art installation that projects images from the top of the tower. 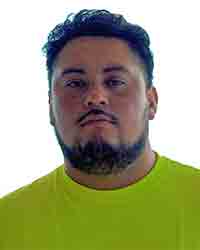 I just got started two months ago and things are going great so far. I’m starting classes next month and am looking forward to learning new things as this is my first trade. I was working in building maintenance before this and was looking for something more stable. I have a friend who’s a Glazier and that’s how I found out about the opportunity.

Unions are completely new to me but I can see that membership builds strong character. Although I’m new I can see how this work changes your lifestyle. You have to be more responsible in terms of how you approach your work and life.

It’s a privilege to be working with this group of guys and to work on such a high profile project for my first job. We have to be very detail-oriented in our approach. Some things seem small but the finer details are very important. We have to be very careful. I love challenges and mastering tedious work like this. 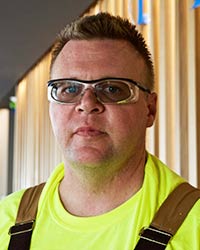 Originally I was going to be an electrician or pipefitter but I had a bunch of friends that got into this and said that it was better, so I got into the trade as well. Previously I was doing small jobs for a utility company. It was a big change going from that to being part of a union because it’s more than just a job, this is a career.

Things have been going well overall these past 12 years with the Glaziers. It goes with the economy. Sometimes the work is there when you don’t want it and then when you want it, it’s not there. So you find yourself working all the time. The past couple of years we’ve just been working constantly, all day and night.

I do a lot of volunteering for the Local when I’m not working as much. I go to the meetings every month but I don’t do as many of the Saturdays right now. I was inspired to get involved because I wasn’t happy with the ways things turned out during past contract negotiations. 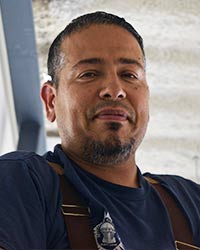 My grandfather owned a glass shop in San Francisco so I’m a third generation Glazier. He had a non-union shop — he had tried to go union but had a bad experience during that time period. I’ve been with the Local 718 for 12 years and was inspired to join because I understood the benefits and the high quality of work we’re called to exhibit for clients and contractors.

I grew up in this trade, started working at seven years old after school and on weekends. I ended up going to school to study graphic design but when things got tough during the Dotcom era, I fell back on what I knew how to do. My grandfather had always told me that there will come a day when I have to sustain my family. He was absolutely right and everyday I’m reminded of his advice.

I would like to see the trades continue to grow because they are very important. Historically, during ancient times, the trades were ran and overseen by the wise men. Today we need to not just see ourselves as a bunch of blue collar workers but see our work as a great responsibility that helps shape society. You wouldn’t have society or cities without the trades, so it’s a big responsibility. 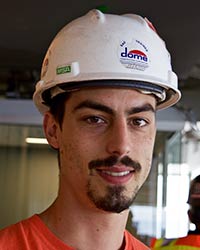 I did a lot of different types of work before entering this trade. I’ve been with the Glaziers for five or six years now. I would say that this is my first real solid job. This is a good career to be in right now with all the work we have, but I know things can change quickly.

I haven’t been to a union meeting in a while. We’re working six to seven days per week so when I do have free time I have other responsibilities. It’s been a grueling schedule since this job started.

As part of the Local 718, we’re protected. There are people looking out for us and taking care of the more political aspects of the trade. It provides a balance and is something that’s very important to me. 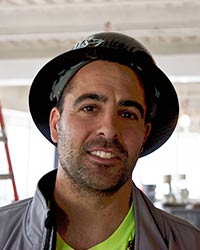 I’ve been with the Glaziers for 12 years now. Things have been great, but of course a little more pay never hurts. That’s about the only thing that could be improved, though the pay and benefits are much better compared to non-union. I was non-union for four years prior to this and then got in touch with our shop foreman who helped me get into this trade. I’m really happy to be here and working on this job. I’ve been on floors four through 30 with Hathaway Dinwiddie for Salesforce.