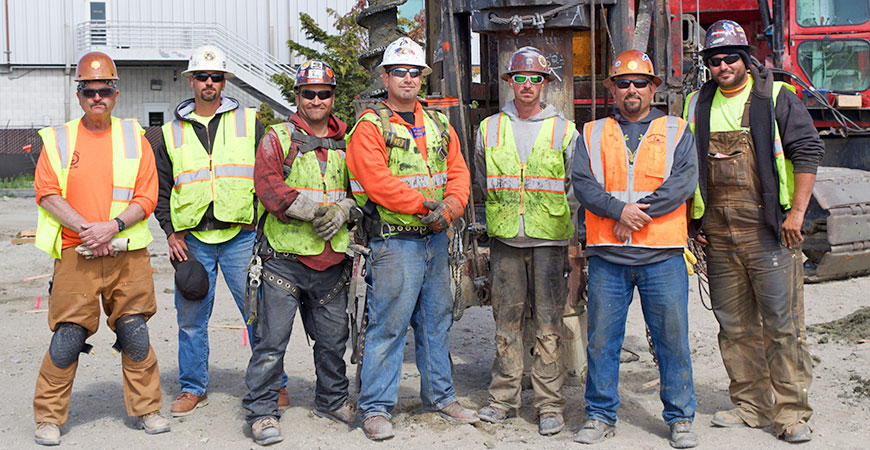 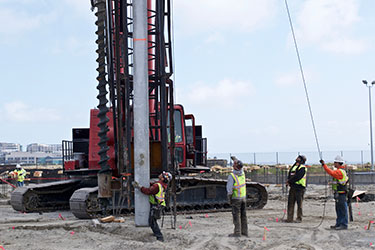 As part of an expansion project at the San Francisco International Airport, general contractor, Walsh Construction, is in the process of adding waste water treatment tanks to an existing facility. Subcontractor, Stroer & Graff Inc. has been at the SFO job site for several weeks with a crew of Local 34 pile drivers who have been busily pounding piles into the ground in the midst of challenging wind conditions. Like many job sites along the Bay front, layers of landfill add another dimension to the work as unexpected objects are routinely found during drilling. Among other obstructions like big boulders and concrete, the Local 34 crew found abandoned airline scrap of unknown origin, posing an immediate safety hazard because of possible jet fuel. Navigating a fast paced project in all weather conditions with less than ideal soil conditions made it necessary to have a Walsh safety coordinator monitoring the site while work was performed.

The extra waste water treatment tanks will serve an airport that's been growing steadily in recent years. In 2016 SFO began a multi-year expansion expected to cost an estimated $5.7 billion. The projects should help with increased international traffic and include renovated terminals, a new hotel and parking, sustainability enhancements and heightened security infrastructure. 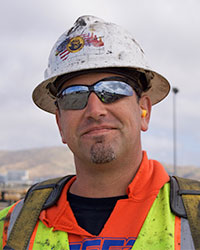 Over the past 16 years I've stayed busy, working steadily for just three companies the whole time. I was fresh out of high school when I joined the Local 34. This has worked out really well and I wouldn't think of going anywhere else. I feel grounded here and have worked for Stroer & Graff for going on six years.

This job is nice because you don't have to deal with other crafts in your way. It's nice to have the peace of mind that you only have to watch out for your own crew, not other crews working at the site. Wind is the big thing right now. With wind speeds at 25 to 30 miles per hour you really feel it in the air and need to hold it steady.

In this particular craft, you can never stop improving on safety. It can kill you in a second and that's not an exaggeration. Eighty percent of the work is above our heads and things could be falling all the time, so we have to be very diligent. Guys in other trades look at us and think we're crazy but for us it's just another day at the office. We're the only ones who do this. Work doesn't happen, especially in the Bay Area, unless we're there first. 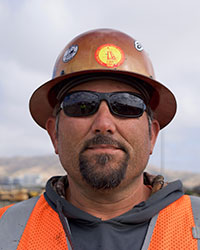 I've been with the Local 34 for 25 years. Things have been great and has kept my family well provided for. Whenever we're driving pile in the Bay Area, it's always good for us. Whenever you're pounding something into the ground it's good, and with great weather, it can't be beat.

In five more years I get to retire. If I was non-union I wouldn't be retiring at 54 years old with 30 years in the trade and an annuity. Granted things could always be better, but work is work no matter the situation. I came from roofing making ten bucks an hour with no retirement and no benefits. I've done everything I've done because of this trade.

This is where we're needed the most. You don't have a solid foundation to build on so everything is going down into bedrock. We're on top of years and years of manmade landfill and you just don't know what's down there. We pre-drill to try and spot any type of obstructions, then we'll either drill through them or dig them up. We have about 350 piles to drive in total. 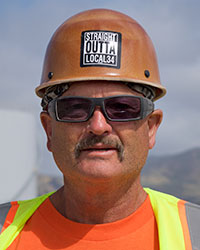 I joined in 2003 as a welder pile driver. I was just eager to work as a welder and had 42 welding certifications under my belt. I had a friend who told me that the pile drivers were better than the iron workers and I took his advice; I went down to the hall and that was it. Things have been going great since. Pile drivers are great, hardworking people and we're treated well.

I attend meetings every last Thursday of the month and there's a lot of participation. I'm very happy to be a pile driver, there are so many good opportunities. It's very consistent work; if you want to work there's work for you. It gives me a good pay check and my wife is happy, so I'm happy.

For this job I've been prepping the piles for the crew. Nothing would get built without us. Whether it's bridges, piers or buildings you need pile drivers. But safety is important – if you came with ten fingers you want to leave with ten fingers. 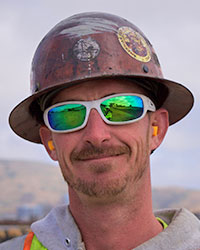 I direct the crane and keep the crew on task. I have to watch out for all the equipment and make sure all the guys stay safe. I've been on this job for three and half weeks so far and we're about half way done. This is a big job for us and it's also a longer job than we usually do.

I've been with the Union since 2008 and I love it. It's good money and I'm able to support my family. I don't make it to meetings much because they get out too late and I live way out in the East Bay. I have to get home to my family. 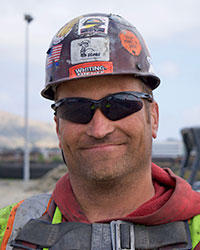 I've been with the Local since 1997. I go to meetings and they've been good with a really strong turnout. I haven't been part of any negotiations recently but I think everything functions well and am glad that we have our raise coming up soon.