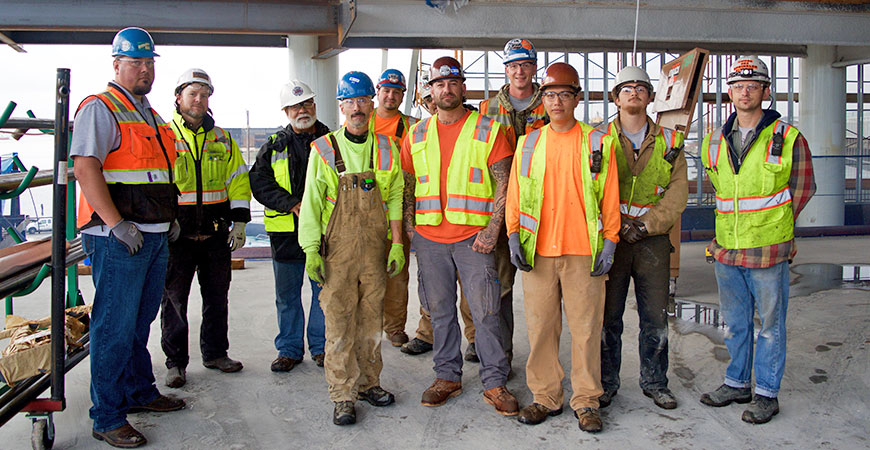 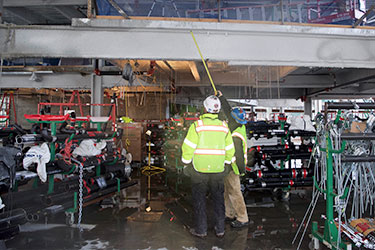 The Sprinkler Fitters of Local 483 have been striving to save lives and property by installing commercial and residential fire suppressing sprinkler systems in the Bay Area for over 75 years. One of their newest endeavors is to get the Golden State Warriors Arena ready for the 2019-2020 NBA season.

The Warriors Arena will be geared to provide 18,000 seats in an event space for sports, conventions, music and other types of entertainment. The project is part of the greater Chase Center mixed-use development which is set to offer a full array of offices, labs, retail and a publicly accessible landscaped courtyard. Mortenson and Clark Construction are the general contractors.

A crew of about 15 sprinkler fitters has been working at the Arena for over 8 months of the two-year long job for subcontractor Cosco Fire Protection. After setting sleeves and inserts, the workers have been roughing for about a month and are looking to replicate installations on the stadium’s upper levels before setting heads and testing next year. In the weeks ahead, another crew of six is expected to join the efforts on the Arena’s tower. A challenge echoed by several members was the rainy March days that resulted in huge mud puddles throughout the job site. 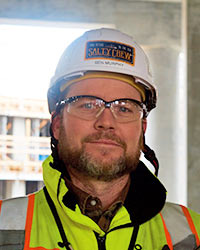 I’ve been with the Local since 1996. My dad is in the trade along with my older and younger brothers. Growing up we used to hang out in the shop where my dad worked on weekends. The pay is good but the biggest thing is the medical. My son has a genetic disorder and there are a lot of doctor’s bills, so if it wasn’t for the benefits I’d be in debt.

I served on the finance committee for 11 years as a volunteer. Some of the older fitters I had worked with as an apprentice encouraged me to get involved. I learned a lot about the other side of things, beyond just out here in the field. I learned about the politics and the importance of looking ahead to future jobs and making sure they go union. We also have a lot of functions and whenever the apprentices turn out we have a big dinner. 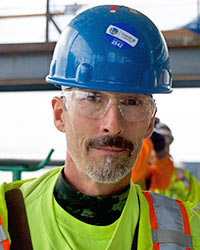 A Union rep signed me up with the Local 20 years ago. Before that I was non-union and things have worked out great since. They put me to work instantly, everything was organized; it was definitely the way to go. That same level of organization has been maintained over the years. As part of a union, we’re a bunch of brothers. We’re a team.

I’m having to improvise as I go along with this job right now. I’m having some issues hanging the pipe. It’s a problem I’ve encountered since we’ve let computers space the hangers. In the past engineers would space the hangers. The computer thinks you only have to set hangers every fifteen feet even when you’re hanging main and need more. They think computers are making everything better and faster but it’s not necessarily the case. 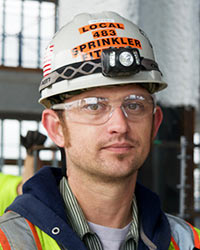 My dad was a sprinkler fitter for 32 years and recommended getting in. He’s retired now and I’ve been with the Local for 15 years. I got my younger brother in and he’s been in for about 11 years. My cousin is an apprentice. I highly recommend the Local 483. The best part is working at different job sites, with different crews and in various cities. There’s always a change and it’s always exciting. It’s a family thing so I really take pride in saving lives and property. It’s an exciting trade to be in.

I regularly go to meetings and enjoy the barbecues they have. We go to meetings as a family. I think there’s a good level of involvement among members because of the sense of pride, brotherhood and camaraderie we share. It’s a really cohesive union. 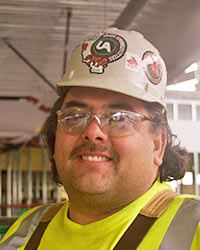 I’ve been with the Local 483 since 1999 and it’s been really great over the years. I attend a lot of meetings because staying educated is important to me. The Union really helps people and their families to better themselves. With the good wages and benefits, it’s a better way of life.

Right now, we’re putting in everything exactly according to the plans, making sure everything fits right, catching anything that’s not right and correcting it. We have to be more on top of things in terms of safety for this job and to really work as one. Everyone has to look out for each other in order to create a safe atmosphere. This will be memorable for me to work on the stadium where the Warriors will play. That’s the best part of the deal. 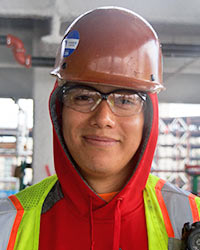 I’m in the third period as an apprentice for the Local 483. The past year and two months have been going well and I’m learning a lot every day in class. I was originally a drywaller and made friends with someone who told me that this was a better move for me and my family. There’s a lot of opportunity here and the pay is better. I’ve attended meetings where we’ve discussed the big topics like healthcare, wages and projects that are coming up as well as conversations happening in the community.

This is a tough job that I’ve been on for a month now. I’m laying out lines for the journeymen to do piping, taping heads and widths. It’s really important to make sure that everything is clean. I have to stay one step ahead of things at all times. 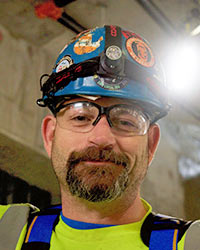 Local 483 is awesome to work for. I’ve been here for about 19 years and it’s been great because they keep you busy, treat you well and take care of you. I attend meetings and they’ve been good but a little more turnout would be better. I understand though, a lot of people live far away so I get it. There’s nothing else that needs to be improved, the wages, benefits – everything has been good.

The Union was new to me when I joined, but I was organized. I was just out of the military and had gotten a job with a buddy and did underground work for fire sprinklers. Our old business agent came to the job site and told me about the Local 483 and told me to call him. I called right away that night.