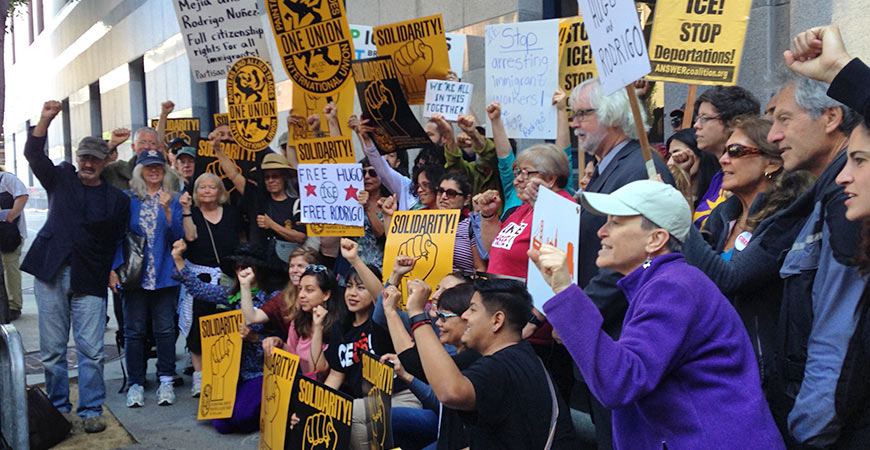 Union members rally in support of Local 83's Hugo Mejia and Local 68's Rodrigo Nuñez, who were detained by ICE while on a jobsite in May. - Photo Courtesy Jon Rodney

Rodrigo Nuñez, Hugo Mejia Taken Into Custody While at a Jobsite

International Union of Painters and Allied Trades Local Union 83 member Hugo Mejia and United Brotherhood of Carpenters Local 68L member Rodrigo Nuñez went to their Solano County job site, a hospital within Travis Air Force Base, on May 3. An otherwise ordinary day of working on the job, they were detained by military base staff and subsequently by U.S. Immigration and Customs Enforcement when they presented their California driver's licenses and tax identification numbers instead of social security numbers. Held by ICE for months at jails in Elk Grove and Yuba County without any formal hearings regarding their cases, many groups across the country have been rallying in support of their release.

"Working people as a whole are facing this economy where income inequalities are becoming very stark, so this is really about everyone standing together in the fight for justice for all people."

"This is like an earthquake for their families," said Tom Ryan, San Francisco Labor Council Director of Community Services. "They are just two people who kissed their kids and wives goodbye and went to work one day. This is an example of regular working people and families being affected by a distortion of what anyone would consider to be constructive immigration policy."

Both Mejia and Nuñez are active participants and volunteers in their respective communities and fathers of children who are U.S. citizens. Jon Rodney, communications manager for the California Immigrant Policy Center confirmed that neither men have had the opportunity of a full hearing. On August 4, Rodney announced that Nuñez had been deported and that his family has requested privacy.

"One of the great things that has come out of this is the joint efforts by faith groups, unions, immigrant-led groups and others that are rallying for these workers," said Rodney. "They see that an injury to one is an injury to all."

To date, rallies in support of Mejia and Nuñez have been held in San Francisco, New York, Rhode Island, Boston and other locations. More events are being planned for the end of August. Congressman Jared Huffman visited Meija in detention and contacted local ICE representative David Jennings, urging him to pursue alternatives to deportation. Jennings has not responded to several inquiries into these two cases.

"The lack of transparency is part of the problem," Rodney siad. "In general with this administration there's an effort to pit different workers against each other, which is the opposite of solidarity; it only worsen conditions. Working people as a whole are facing this economy where income inequalities are becoming very stark, so this is really about everyone standing together in the fight for justice for all people."

In an unprecedented move, IUPAT president, Kenneth Rigmaiden, posted a Twitter video on July 13, urging ICE to release the workers and reunite them with their families. Neidi Dominguez, national strategic campaign coordinator and assistant to the general president at IUPAT explained that though this is hardly the first time workers have faced deportation, the case is unique because it involves union members who've also received public support from IUPAT.

"The union has been part of the effort to keep these members in the country and with their families," Dominguez said. "At IUPAT, we know that if we're not able to push back against the aggressive attacks on workers by this administration, it will make it very difficult for us to grow. We will defend our workers regardless of their immigration status."

Dominguez stated that the union dedicates time to educating members to create awareness about immigrant and worker rights. She said that the problem isn't with immigrants but with the policies, and that if undocumented workers are allowed to be exploited because they are afraid of deportation, that leaves all workers vulnerable to exploitation by employers.

"This is about growth and sustainability of the union," she added. "We have to bring employers to the table and engage on immigration reform because good policies protect all workers."