Stick Frame Over Podium: Challenges Ahead 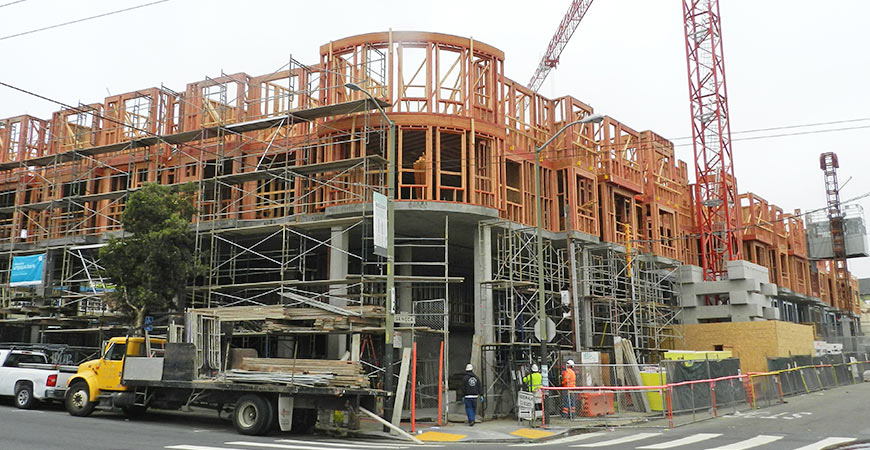 Stick frame over podium construction, as seen here at 5050 Mission, is a type of construction that is growing in popularity, but with a large base of non-union contractors. - Photo by Paul Burton

Is 5050 Mission a Harbinger of an Upcoming Trend?

Contractor Roberts-Obayashi is building a new 61-unit apartment complex at 5050 Mission that includes non-union contractors. The 100,700 square foot building at the corner of Mission Street and Seneca Avenue in the Mission Terrace neighborhood is wood frame over podium – a type of construction often done by non-union subcontractors.

"Stick frame over podium is going to be a very important building type for the construction market in the near future as more multi-family housing is built along transit corridors. Unions are challenged because there is a large base of contractors that do that type of work who are from outside our region and are not union signatories."

"Stick frame over podium is going to be a very important building type for the construction market in the near future as more multi-family housing is built along transit corridors," said San Francisco Building and Construction Trades Council Secretary-Treasurer Michael Theriault. "Unions are challenged because there is a large base of contractors that do that type of work who are from outside our region and are not union signatories."

Theriault said San Francisco does have some contractors with experience in wood frame over podium projects but not on the same scale as in Southern California and other parts of Northern California.

"It is going to be a challenge in the future, and is a trend we will be watching" he said.

Diablo Plumbing from San Diego, the plumbing contractor at 5050 Mission, is an example of a non-union subcontractor from outside the Bay Area that undercuts the wages and standards of union contractors. SFBCTC President and Plumbers Local 38 Business Manager Larry Mazolla, Jr. said as politicians talk more about the need to build more housing they also look at the cheapest way to build it, and stick-over-podium is cheaper.

"We need to keep talking about it to the Board of Supervisors and other politicians, as we do with the issue of modular housing – that cheaper is not always better," Mazolla said. "We need to maintain and uphold San Francisco building codes and local hire laws and not sell out to the lowest bidder."

Mazolla said Diablo has resisted the union's effort to organize its workers, but Local 38 has been able to bring some of the employees into the union.

Wood frame over podium construction has been trending for the last few years nationally, promoted by the Wood Products Council and various architects and contractors.

A 2015 article on the Marks, Thomas Architects website, "Exploring a Shift to Five-Story Wood-Frame Construction," notes that "Nationwide, there has been an increase in the demand for multi-story mixed-use and multi-residential structures. Common configurations include up to five stories of residential use over retail, commercial, office, and parking occupancies … Podium designs are one way to maximize the number of stories, increase unit density and lower construction costs."

The article highlights several projects, including the Drs. Julian and Ray Richardson Apartments in San Francisco, the five story 120-unit apartment complex at Fulton and Gough completed in 2011 for Mercy Charities Housing and Community Housing Partnership. That project was built under prevailing wage requirements as a redevelopment site, showing that affordable housing can be built while also paying workers union scale.