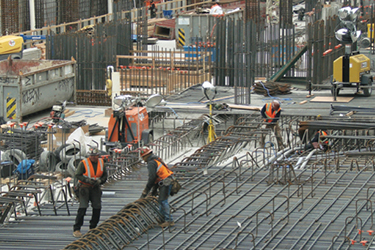 Rebar columns are now rising above street level at what will be a 13-story apartment building at 150 Van Ness Ave. - PHOTO BY PAUL BURTON

Emerald Fund’s 13-story apartment building at 150 Van Ness Ave. is on schedule for completion by next February, with rebar columns now rising above street level.

Clark Construction is the general contractor for the 419- unit complex being built with all union labor.

Marc Babsin, principal of Emerald Fund, said the develop- er “always uses union labor and is a big supporter of the building trades,” using union contractors on all of its many projects in San Francisco over the past several years. The National Electrical Benefit Fund (NEBF) is an equity partner in the project, investing funds from the International Brotherhood of Electrical Workers’ union pension fund. Babsin noted that, “most of our projects are financed with union funds – either through loans or direct investment.”

According to Clark Construction’s website, “the facility will feature an array of amenities, including a roof-top terrace, lap-swim pool, spa, and basket- ball courts. Amenity space will be constructed on the first and second floors and will be comprised of reclaimed stone flooring from the California State Automobile Association headquarters.”

Plant Construction was the main con- tractor for the demolition of the existing building at Van Ness Ave. and Hayes Street, delivering a clean site for Clark in December 2015. Harris said the former building at the site occupied 40 percent of the site and went down 10 feet below grade. The site was excavated down 26 feet to accommodate an underground parking garage that will have a high ceiling and car stackers with three levels. It will accommodate over 200 cars.

Number of stories at 150 Van Ness

Units to be below market

Total square footage of the building

The concrete pour of the base and slab was done at the end of January. Pacific Structures is the contractor for the concrete. Other union subcontractors include Alamillo Rebar with a large crew of ironworkers on the job now, Cal Dry- wall for interior partitions and exterior skin, Woodbrige Glass, Cupertino Electric, Broadway Mechanical for plumbing and HVAC, Allied Fire Protection for sprinklers and Alliance Roofing. Con- don and Johnson did the shoring and A & B Construction did the excavation. Around 80 union construction workers are on the job now, with between 50 and 80 on the job every month.

The building will meet Green Point standards with efficient energy systems for lighting, mechanical, and water usage. Harris said work on the exterior will begin in May and interior work in June. The 450,000 square-foot concrete building will also have 9,000 square feet of retail space and be clad in a curtain wall and terracotta panels.

The project is on schedule for completion by February 2018.

The 150 Van Ness project is one of many under construction or nearing the start of construction near Van Ness Ave. and Market Street, part of the Market and Octavia Area Plan that calls for a high- density mixed-use neighborhood around Market Street’s transit connections.