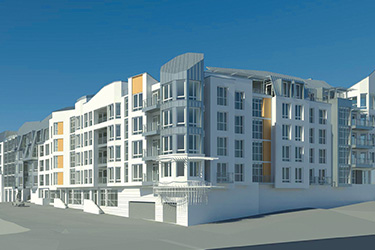 The redevelopment of the Schlage Lock site will be completed in three phases over 10 years, and more than 1,600 residential units will be built.

The San Francisco Building and Construction Trades Council has finalized a Project Labor Agreement with Bayside Development for construction work on the mixed-use development at the former Schlage Lock Factory site in Visitacion Valley.

Bayside Development is the design and construction affiliate to Universal Paragon Corporation, which worked with the city and the Visitacion Valley community to plan the project.

San Francisco Building and Construction Trades Council Secretary-Treasurer Michael Theriault said the PLA would guarantee good paying union jobs on the $637 million project. The development is projected to create approximately 2,800 construction jobs over the next 10 years, along with permanent jobs in the retail establishments.

Plans for the Schlage Lock site have been discussed, and revised for 15 years, since the Schlage factory closed in 1999. In 2005, the San Francisco Board of Supervisors approved a mixed commercial-residential plan based on a community vision for the site, which was then designated as a redevelopment area. After several years of environmental studies and community input, the project was ready for final approvals in 2012, but when Gov. Brown dissolved redevelopment agencies that year, $50 million in redevelopment funding for the project was lost.

The Board of Supervisors approved a development agreement in July 2014 for the 20-acre project site on Bayshore just north of the San Francisco/San Mateo County line that was once the home of the Schlage Lock Factory and Southern Pacific Railroad Company rail yard. Supervisor Malia Cohen said at the time that she was pleased that the community benefits for the development would include jobs for local residents.

“It was critical to ensure that there is a project labor agreement in place for the construction, and workforce requirements so that jobs are provided by the retailers to people in the 94134 zip code – the Visitacion Valley neighborhood,” Cohen said.

Along with good jobs, other community benefits include infrastructure improvements and affordable housing, with 15 percent of the condos and rentals available at below-market-rate. The developer has also worked on environmental remediation at the site to clean up polluted soil and ground-water pollutants on the old industrial site prior to development, with the goal of restoring the earth to above-standard conditions. In July 2013, clean soil was brought in and some grading, clearing, demolition and soil stock piling was completed.

The Schlage Lock project will also meet Leadership in Energy and Environmental Design for Neighborhood Development goals through energy efficient building design and sustainable building practices, along with the emphasis on use of public transit and creating a pedestrian friendly neighborhood.

The project will be built out in three phases over 10 years. The first phase includes construction of 560 residential units of one to four bedrooms, new grocery and retail stores, pedestrian access to the Caltrain station and a new park. Another 560 residential units will be built in phase two, and 550 more in phase three. The apartment buildings and condos will be between five and eight stories tall.

The developer could not be reached for comment on whether a general contractor has been chosen for the project.