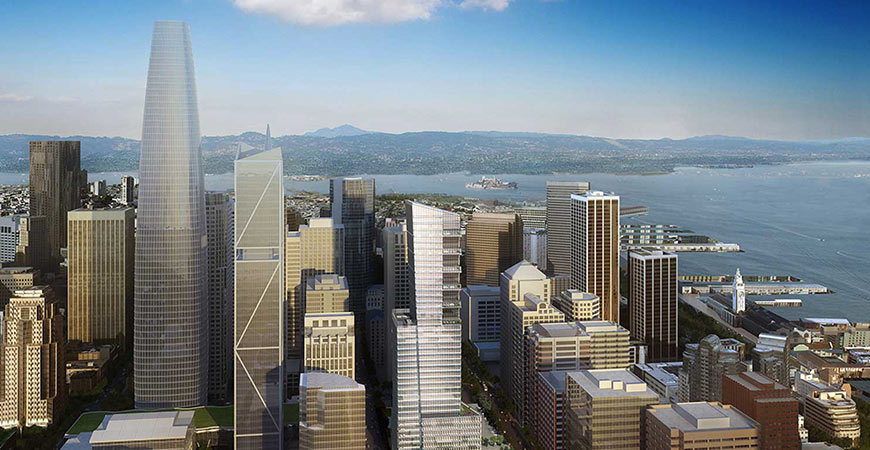 The project is a joint venture of The John Buck Company and Golub and Company with MetLife Real Estate Investments. The developers bought the site from San Francisco’s Office of Community Investment and Infrastructure, the successor to the Redevelopment Agency that oversees the development of the Transbay District, for $172.5 million. The funds from the land sale will go to the Transbay Joint Powers Authority to cover some of the construction costs of the Transbay Transit Center.

The 605-foot-tall building’s façade will be a curtain wall with vertical glass fins and floor-to-ceiling glass. Park Tower is designed by architect Goettsch Partners and Solomon Cordwell Buenz. It features flexible floor plans with floor plates ranging from 27,500-12,000 square feet to accommodate different kinds of commercial or high tech tenants. The building will have17,000 square feet of outdoor space on some of the upper floors with 14 skydecks, each with about 1,000 square feet of private outdoor space. The building is being designed to meet LEED Gold certification through use of natural light and ventilation, parking for alternative fuel automobiles, storm water collection and reuse, and other energy efficiency measures.

Golub and Company is also the developer for the 32-story, 409-unit 299 Fremont residential complex at Transbay Block 6 that received funding from the Multi-Employer Property Trust and is being built using all union labor. The John Buck Company specializes in commercial development, mostly in its home base of Chicago.

Clark Construction generally uses union subcontractors on its projects. Small crews of operating engineers, carpenters and laborers are currently working on site excavation. The earth work will continue for about a year, with the below grade and foundation work completed at the end of the third quarter 2016. Structural steel work will begin in late 2016 or early 2017, with the project scheduled to be completed by the spring of 2018.