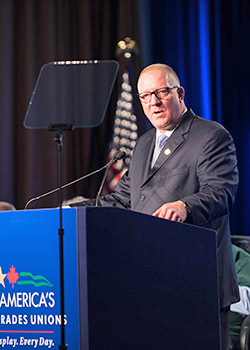 North America’s Building Trades Unions (NABTU) held its Legislative Conference in April in Washington, D.C., where Building Trades union members got an opportunity to learn about important legislation and build support among members of Congress.

The unionists heard speeches by political and union leaders, including NABTU President Sean McGarvey, Transportation Secretary Anthony Foxx, and Senator Roy Blunt, a Republican from Missouri. Blunt’s appearance coincided with a call by McGarvey for the building trades to look beyond party affiliation and work with members of Congress who support the Building Trades’ agenda. McGarvey said the organization was committed to a bipartisan approach to politics that seeks to create “Building Trades Majorities” within federal, state and local governments.

In his keynote address to the conference, McGarvey said progress had been made through a “value-centric, strategic approach to organizing” that builds partnerships with businesses, industries, government agencies and community leaders. “Today, our workforce development expertise is opening doors all across the nation,” he said. “Membership is up; man hours are up; contractor backlogs are up. In the past two years our membership rolls have increased by 148,000.” Progress could be derailed without a renewed commitment to a strategic, bipartisan approach to politics and organizing, McGarvey cautioned.

McGarvey said the building trades had success on the issues of multiemployer pension fund reform and a new or expanded guest worker program because of “a willingness to work both sides of the aisle within the U.S. Congress to build bi-partisan support for our position. And that bi-partisan approach is also why in today’s U.S. House of Representatives, which is arguably the most conservative House of Representatives in modern times, the Building Trades have built a bi-partisan coalition that includes roughly 50 Republicans on the issue of federal prevailing wage protections under the Davis-Bacon Act – and we are building increased bipartisan support for PLAs in the United States Senate.”

Building relationships with government and community leaders at the state and local level to support apprenticeship programs has also gotten results. “That community-minded approach is centered upon the idea that the Building Trades have the tools, the programs and the wherewithal to help address many of the socio-economic problems that communities and local governments have been struggling with for generations,” McGarvey said. “We are demonstrating to local governments and community leaders a path, through formal apprenticeship and apprenticeship-readiness programs, to move historically underserved populations away from a life of hopelessness and despair and toward a rewarding and productive life in the middle class.” He noted that the building trades are now operating apprenticeship-readiness programs in over 70 localities across the United States.

The Building Trades’ legislative priorities for 2015 focus on infrastructure investment, energy policy, project labor agreements, maintaining Davis-Bacon, water resources reform, and reforming permitting for development. Building Trades members were encouraged to tell their elected officials to support Davis-Bacon and fight against efforts in several states to repeal or undermine the law and the payment of prevailing wages. Members were also urged to tell their elected officials to support the Project Labor Agreement option for federal projects and oppose congressional efforts to mandate prohibitions on this important construction management tool.

The NABTU calls for investing in rebuilding the nation’s crumbling infrastructure, which will result in the creation of millions of jobs in the next decade, and for the projects to include provisions that protect community wage and benefit standards. The reauthorization of the highway bill, which is currently set to expire May 31, 2015, will be the single largest job-creating bill for the construction industry that Congress will consider this year. A NABTU issue brief notes that, “North America’s Building Trades Unions believes a strong user fee based system provides the necessary stability on which to craft a large, robust bill, and supports efforts such as Congressman Earl Blumenauer’s H.R. 680, the UPDATE Act of 2015, which strengthens the foundation of funding provided by the user fee model, while supporting other funding mechanisms that will grow the highway program.”

NABTU has called for full funding of the Water Resources Reform and Development Act (WRRDA, which authorizes resources to upgrade inland waterways and funds projects such as flood protection, port improvement and upgrades to aging locks and dams). The legislation could impact water projects in California, including the Sacramento River delta.

NABTU’s energy priorities call for an “all of the above” power production strategy that will enhance domestic energy security and create jobs. The organization noted that a comprehensive U.S. energy policy must promote cutting edge, domestically developed, and domestically sourced clean energy technologies.

Another priority is passing the James Zadroga 9/11 Health and Compensation Reauthorization Act, which provides funding for workers suffering adverse health impacts from working on the clean up and rescue efforts following the September 11, 2001 terrorist attacks. The bill would enable the World Trade Center (WTC) Health Program to continue to provide medical monitoring and treatment for 9/11-related conditions to the over 70,000 9/11 first responders and to the more than 7,000 injured and ill 9/11 survivors. This includes approximately 15,000 Building Trades members. Last year, the program provided treatment for over 20,000 people for WTC-related health conditions including lung disease, PTSD, and cancer who are sick because the federal government failed to inform them of the health hazards of being exposed to the dust and fumes from the collapse of the twin towers. The Zadroga bill also includes provisions to provide medical monitoring and care for responders to the Pentagon and the Shanksville, PA crash site. It would continue the access to treatment and benefits in all 50 states for over 7,600 9/11 responders, including those who came to help in the aftermath of 9/11 or have since moved from the New York area, and live across the country.

North America’s Building Trades Unions, formerly the Building and Construction Trades Department of the AFL-CIO, is an alliance of 14 national and international unions in the building and construction industry that collectively represent over 3 million skilled craft professionals in the United States and Canada.