Election 2020: Not Just the Top of the Ticket 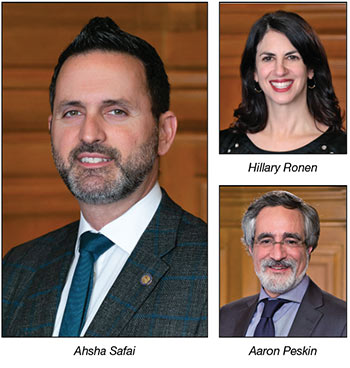 Although it can be said that every election is important, the current climate where voting rights and the rights of working people are under attack renders the upcoming November election especially prominent on the minds of many in Labor. The stakes may obviously be high on the national level; however both locally in San Francisco and at the state level there are several pivotal races and ballot measures that are of great consequence to organized labor.

Six district supervisor races will be held including the most heated one involving San Francisco Building & Construction Trades Council backed District 11 Supervisor Ahsha Safai who’s main contender, John Avalos also previously served on the Board. The Building Trades Council maintains a solid ‘No’ stance on Measure I, the Real Estate Transfer Tax hike that will make it harder to build in San Francisco. SFBCTC President Larry Mazzola Jr. has been a primary proponent of Measure A, that could allot vital funding to supportive housing creation as well as the maintenance of parks and streets. The passage of Measure F, the Business Tax Overhaul, could spare many City workers from pandemic-induced layoffs.

At the state-level, Prop 22 seeks to dismantle some of the gains won through AB 5 by allowing the misclassification of gig workers who would be denied paid sick leave, workers compensation or unemployment benefits if passed. Another important state measure, Prop 15, is supported by the SFBCTC as it would change the way that taxes are levied on businesses and mean more money for local governments and schools.

One of the hottest district races is in District 11 with incumbent Ahsha Safai running against former member of the Board of Supervisors John Avalos. Safai has received the endorsement of the SFBCTC. He’s also significantly out-raised his opponent in campaign contributions so far.

“District 11 is a big race,” said Mazzola Jr. “Asha Safai has been totally helpful to us. He’s had an open door policy with the building trades, big time. He’s been instrumental in getting the Citywide PLA done.”

Another important figure in achieving the Citywide PLA is District 3 Supervisor Aaron Peskin who’s running against three other candidates. Both he and District 9 Supervisor Hillary Ronen have SFBCTC backing, however Ronen is running unopposed.

One of the more competitive races will fill the spot of outgoing President of the Board of Supervisors Norman Yee for the District 7 seat. Among the five candidates running, the Building Trades Council has primarily endorsed Ben Matranga, followed by Myrna Melgar, with Vilaska Nguyen as a third choice.

In District 1, of the seven contending candidates, Marjan Philhour has won the Council’s endorsement. SFBCTC did not take a position on the District 5 race.

Four seats on the Board of Education will be decided this election, and of the 10 people running, the SFBCTC has cast its lot with Matt Alexander, Jenny Lam, Michelle Parker and Mark Sanchez. Similarly, City College of San Francisco has four vacant seats on its Board of Trustees with 11 candidates running in the race. The Council has endorsed Aliya Christi, Tom Temprano, Shanell Williams and Alan Wong.

No on Prop I - Transfer Tax

According to Paulson, the SFBCTC is adamantly opposed to Prop I, the Real Estate Transfer Tax, because it drives up the cost of development. If passed, the measure would amend the Business and Tax Regulations Code to increase the Real Property Transfer Tax rate from 2.75 percent to 5.5 percent on property sales worth at least $10 million but less than $25 million, and increase it from three percent to six percent for properties worth $25 million or more. It requires a simple majority to pass.

“The transfer tax is a no-go for us because it’s going to make it harder for developers to do business in town and we’re going to lose jobs over it,” said Mazzola Jr. “It’s going to hurt union pension funds that invest in these projects and invest in these buildings downtown, because when they’re sold those union pension funds are going to get less off of the sale than they normally would have gotten. It’s a bad deal for unions and for workers in San Francisco. We’re a strong ‘No’ on Prop I.”

Yes on Prop A - Health & Recovery

Prop A would allow a general obligation bond totaling $487,500,000 to be put toward a variety of important issues in the city including housing and services for those with mental health issues, substance abuse, and experiencing homelessness. It would also supply funding for parks, open space, recreation, streetscape improvements and plazas — all work that would fall under the Citywide PLA. Prop A requires over 66 percent in favor to pass.

“It’s going to improve parks and open space, which is vital right now during the pandemic because people need somewhere to go and they’re utilizing the parks as much as possible,” said Mazzola Jr. “It’s also going to fund permanent supportive housing and mental health and substance abuse treatment, which are very important for the city. We have to make sure that we’re putting money into not only dealing with homelessness but also the health of San Franciscans. It’s also going to provide a lot of infrastructure projects in terms of street repairs and resurfacing, and adding curb ramps to make San Francisco safer for pedestrians. One of the main aspects of Prop A is that it won’t cost taxpayers anything.”

The Small Business & Economic Recovery Act, or Prop F, will help provide tax relief for sectors heavily impacted by the COVID-19 pandemic such as retail and restaurants, as well as generate revenue to keep critical City services afloat despite the projected $1.5 billion deficit caused by the pandemic. It requires a simple a majority for passage.

“Prof F is a very important one because it’s going to put money toward protecting City workers, their pay and mitigate layoffs,” Mazzola Jr. explained. “If that doesn’t pass then they’re going to have to make tough decisions about layoffs and future raises for employees. It’s vital that that passes in November so that we can make sure that we protect our City workers and stop layoffs.”

No on 22, Yes on 15
The SFBCTC is advocating for a ‘No’ vote on Prop 22. The measure was written by Uber, Lyft, Instacart and DoorDash in an attempt to exempt those companies from providing protections to their workers. Instead they want to continue misclassifying so-called “gig” workers, denying them paid sick leave, workers compensation and unemployment benefits.

The Building Trades Council is promoting a ‘Yes’ vote on Prop 15, that if passed would raise business taxes by using market value instead of purchase price as a benchmark for setting property taxes paid by commercial property owners, not residents. The money would go toward local governments and schools.

At the national level the Presidential race between Joe Biden and Donald Trump presents a clear choice for many in the Labor community. Mazzola Jr. said that council leadership took its time in vetting each candidate out of consideration for the diverse political views within the building trades. Biden, with a strong pro-worker track record emerged as the top pick especially with Kamala Harris on the ticket for Vice President, who’s been a steadfast fighter for California’s workers.

“We all sound repetitive but this really is the most important election of our lifetime,” said SFBCTC secretary-treasurer Tim Paulson. “Are we going to be a democracy or are we going to be puppets of Donald Trump who’s not done anything for working men and women? California is going to vote against Trump, that’s a given, but we really need everybody to weigh in nationally to make sure that Joe Biden becomes our President and our own Kamala Harris is going to be the Vice President. There’s a lot at stake.”

The Council is also endorsing Speaker of the House of Representatives Nancy Pelosi, who’s running against Shahid Buttar for the San Francisco congressional seat, and also supports incumbent Jackie Speier against Ran Petel for the U.S. House District 14 seat.

This time around, the Council won’t be endorsing any candidate for State Senate. Despite having backed him in the past, Senator Scott Wiener lost the trades’ endorsement due to his more recent pushing of housing legislation that lacked skilled and trained workforce requirements.

Incumbent David Chiu who historically has received support from the building trades is running against a Libertarian by the name of Starchild for the 17th Assembly District. Pro-worker Phil Ting is running to keep his 19th District Assembly seat against opponent John McDonnell.