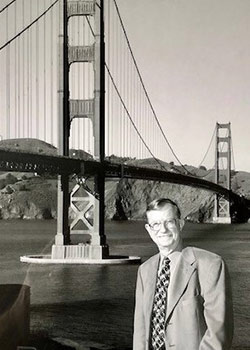 Legacies are a mixed bag. As often as not the effect an individual has on the world is hidden in the hearts of their friends and family, not readily apparent to the world at large.

Such is not the case for Stan Smith Sr. Anyone who wants to measure the impact of one of San Francisco’s premiere labor leaders over the past half century can simply look at the City’s skyline with its construction cranes and new skyscrapers dotting the horizon.

Brother Smith served as the Executive Secretary-Treasurer of the San Francisco Building and Construction Trades Council (SFBCTC) for 25 years until 2000, through years of booming expansion and bleak financial crises. And working with a strong trade union coalition, which often included sometimes difficult partnerships between construction and non-construction unions, he fought hard to keep San Francisco a “good union town.”

“I think we all owe a lot to Stan,” said Mike Theriault, who served 13 years as Secretary-Treasurer of the SFBCTC before retiring in 2018. “Stan was responsible for the Mission Bay Project Labor Agreement which paid off handsomely for a whole generation of union construction workers in San Francisco. He was also very supportive of women in the trades and of women in leadership in the labor movement, which for years was ‘a good old boys’ network.”

Anyone who knew Brother Smith understood that his commitment was deeply personal. “I owe a lot to Stan,” Theriault. said “I was a rank and file delegate and he was very supportive of me. I believe he was one of the major reasons I was appointed to the position of Secretary-Treasurer for the SFBCTC.”

These sentiments were echoed by labor leaders from throughout San Francisco and California who remembered Brother Stan Smith, Sr., who passed away in November at the age of 89.

“Stan Smith was the face of the Building Trades in San Francisco,” said Tim Paulson, current SFBCTC Secretary-Treasurer. “He was a real fighter and a true trade unionist.”

“In my 50 years in the labor movement Stan was probably the most dedicated labor leader I ever met,” said Larry Mazzola, Sr., who served as President of the SFBCTC throughout much of Brother Smith’s leadership. “He always stood up for the underdog and for working people. I am very proud to have worked with him.”

“Stan was always firm in his convictions,” remembered Robert “Spider” Cantley, a member of Heat & Frost Insulators Local 16, as well as a delegate and Executive Board member on the SFBCTC. “He knew what labor was all about, but he was still open and willing to listen. We spent many long hours in the parking lot after Building Trades meetings discussing and debating issues. I learned a lot from Brother Smith.

Brother Cantley specifically recalls a 14-week prevailing wage struggle at the University of California, San Francisco Medical Center. “He was right there on the picket line next to me throughout the entire struggle. He was a great leader, and I am proud I could call Stan a good friend.”

“I knew Brother Smith my whole life,” said current Local 38 Business Manager and SFBCTC President Larry Mazzola, Jr. “He was a great friend and a great labor leader. He was the epitome of ‘a good union man’.”

“Stan was a great labor leader, and a guiding force in San Francisco,” said Randy Oyler of the Ironworkers, Local 377, who also served on the SFBCTC. “He was involved in a number of successful Project labor Agreement, including Mission Bay and Hunter’s Point.

Although Stan, who came out of Glaziers Local 718, dedicated his life to the working men and women of San Francisco, it would be a mistake to think that was the extent of his involvement with the community he loved. He served on the Board of Directors for Young Community Developers, a community-based organization that provides education and employment training opportunities to residents of San Francisco’s Southeast neighborhoods. He served on the City Planning Commission, as well as other community boards and commissions.

He was also particularly proud of his service to his country as a US Marine. Along with former Marines Oyler and Elevator Constructor Ellis Smith, Stan made sure that trips to Washington, DC, and elsewhere included a look at Marine history whenever possible.

“We would often meet at the Marine Club for lunch,” explained Brother Ellis Smith. “And several time when visiting other cities, we found ourselves escorted around Marine facilities. It was a brotherhood we were all proud to share.”

A boxer in his youth, Stan continued to treasure the sport and its history throughout his life. “Stan had an extensive library of boxing videos,” explained Local 38 Business Agent Frank Reardon, Stan’s former son-in-law. “And I can say from personal experience that his politics carried over into his boxing affinity. I must have seen his favorite fight, the second Joe Louis versus Max Schmeling half a dozen times. He loved seeing an African American beating up one of Hitler’s examples of Arian superiority.”

Perhaps most important to Brother Smith was his family, including his six children, Lynn Rodriquez, Audree Granieri, Beverlee Rodondi, Bruce Smith, Dayna Reardon and Stan Smith, Jr. Not surprisingly, all of his children have been deeply involved with labor or progressive politics, including Stan, Jr., who currently serves as the Business Manager of UA Local 483, as well as the District Five Vice-President for the United Association of Plumbers and Pipefitters, and Bruce Smith, a Superintendent in the SF Carpenters union.