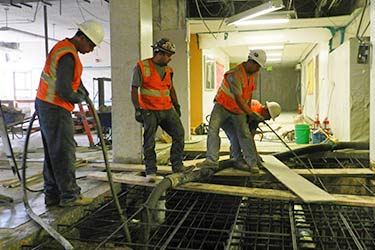 Several more projects covered by the Project Labor Agreement between the San Francisco Building Trades and the San Francisco Unified School District are underway in the city this summer. The PLA was adopted last August for projects of $1 million or more funded by the 2011 Facility Bond Measure.

The $531 million bond fund is being used for upgrades and improvements to 47 school sites. Those include 29 elementary and K-8 schools, six high schools, four middle schools, and five child development centers. Work includes seismic upgrades as well as improving health and safety standards such as installing fire sprinkler systems, repairing elevators and replacing drinking fountains; making building repairs such as fixing bathrooms and repairing or replacing electrical and plumbing systems; and making other needed repairs and replacements.

The District reported that all the major work done for the $450 million 2006 bond was on schedule and on budget, and the major upgrades required to bring the District into compliance with the federal Americans with Disabilities Act were completed by the June 30, 2012 court deadline. Those projects funded by the 2003 and 2006 bonds included improving accessibility for students with disabilities by installing ramps, signs and assistive listening devices. The SFUSD Bond Program has funded the modernization of all district schools, except those most recently constructed. The focus this year is on seismic upgrades, modernization, expansion, and the design and construction of the new Willie Brown Jr. Middle School in the Bayview.

SFUSD Director of Construction for the bond program, Maureen Shelton, said the Lowell High School seismic project includes structural reinforcement, drag beams, foundations, and shotcrete walls. She said modernization upgrades for the school were completed in 2003 through an earlier SFUSD bond. Lowell was founded in 1856 and is the oldest public high school west of the Mississippi. Its list of notable graduates includes former Governor Pat Brown, Supreme Court Justice Stephen Breyer, comedian Margaret Cho, and Rube Goldberg of the Class of 1900.

The general contractor for the seismic upgrade project is Arntz Builders, with Swinerton serving as the Construction Management contractor. Arntz was also the general contractor for projects at Mira Loma and Gordon Lau elementary schools. Many of the contractors on the SFUSD projects have experience on school jobs and deal well with the tight scheduling needed to complete the jobs as well as perform the work in a way that doesn’t impact the students. While contracts are awarded based on lowest bid, the experience with school projects is also a benefit for the District.

Arntz’s Project Superintendent Frank Proteau said the project is phased, with major shear wall and shotcrete work being done this summer. Proteau, whose brother Les is president of District Council 16 painters, said the project is being built all-union. “The union subcontractors do good work, and make our jobs easier,” he said.

The all-union crews performed a major concrete and shotcrete pour July 19. The pour consisted of 14 truckloads of concrete and four of shotcrete from San Francisco-based supplier Bode concrete. Proteau said the shotcrete was being installed in phases along the north wall, from the first floor up to the roof level of the three-story school. Arntz has a small crew of Laborers from LiUNA Local 261 handling the concrete work, with laborers and cement masons from Dees-Hennessey doing the shotcrete installation. Other union subcontractors include Broadhead Steel for rebar, Watson Electric and KBE painting.

The second phase of the seismic upgrade will be completed next summer. Pam Welty, Construction Manager for Swinerton Management & Consulting, said the project is on schedule to be completed before the start of the 2015 school year. The District recently put out a request for bids for computer lab renovation at Lowell.

The new Willie Brown Jr Middle School funded by the 2011 bond will be a state-of-the-art, 88,000-square-foot middle school. Its design, by Architect WRNS Studio, is the result of a comprehensive community process that involved parents, administrators, educators and community leaders, according to the District. The school features two buildings that wrap around a central “community hub” to create an inclusive campus environment. The new middle school replaces the elementary school on the site, which was razed in 2012.

The school’s location on a hillside at the top of Silver Avenue offers unobstructed views of the Bay, but also poses challenges for the construction with its 75-foot drop from the school site to the street at the front entrance, said SFUSD’s Project Manager Alberto Vasquez. He noted that construction of a new school is a different process than renovating an existing one, including making sure the school is accessible. The two-story school will be 100 percent ADA-compliant from the beginning, he said. It will include three elevators, installed by union contractor Ascent.

There were approximately 30 construction workers on the all-union project in late July, including carpenters, operating engineers, laborers, sprinklerfitters, ironworkers, and electrical workers. Subcontractors include Western Erectors and Henderson for the steel and iron work, BCI for concrete, Norm’s Drywall, Broadway Mechanical for HVAC work and Scott Electric. Vasquez said work on the stucco and rain screen exterior would begin this fall. Construction will be completed next summer, he said, in time for school staff and contractors to stock the school with books, computers, desks and office supplies.

The school is located in the historically underserved Bayview neighborhood, where it will serve the local community by including public access to the school gymnasium, library and multi-purpose facilities. The school’s wellness center will offer dental, healthcare, fitness and counseling services to any SFUSD students in need.

The PLA with the school district incorporates the District’s new local hire policy, which it adopted in June 2013. Under the policy, at least 25 percent of construction labor hours must be done by San Francisco residents. This includes carpenters, floor layers, electricians, ironworkers, painters, plumbers and laborers. The policy also requires that a minimum of 50 percent of apprenticeship hours be filled by San Francisco residents. In addition, construction contractors must contribute to and support internship and apprenticeship opportunities. Vasquez said the District was tracking local hire compliance monthly for the Willie Brown Middle School project, with the goal of 20 percent. He said there had been some local hiring and he expected that there would be more local residents employed as the construction progresses.
The SFUSD’s local hire coordinator Benita Benavides explained the SFUSD’s local hire policy to building trades union leaders at the San Francisco Building and Construction Trades Council’s Board of Business Representatives meeting on June 24. She said the school district wants to collaborate with San Francisco unions to figure out how to increase local hiring. There was some discussion between the business agents and Benavides about whether the unions or contractors should be responsible for making sure local hiring was happening. SFBCTC’s Executive Secretary-Treasurer Mike Theriault commented that, “it is the contractor’s responsibility, but it does fall on us to make sure the percentage of union workers is there.”

Benavides said there are currently six projects with significant hours of local hiring. Modernization projects at Starr King Elementary and Roosevelt Middle School were meeting local hire goals, with large percentages of laborers being local residents, and 100 percent of operating engineers being locals at each school. Other schools had local hire percentages ranging from 7 to 11 percent.

Theriault said the issue is complex, with some unions representing trades workers from all over the Bay Area. He suggested that the school district look to the contractors to ensure they meet the requirements. Benavides said if there is a shortage of local workers, contractors can sponsor some for apprenticeship programs by referring them to pre-apprenticeship programs and community-based organizations.

Organized Labor will report on other SFUSD projects in future issues.