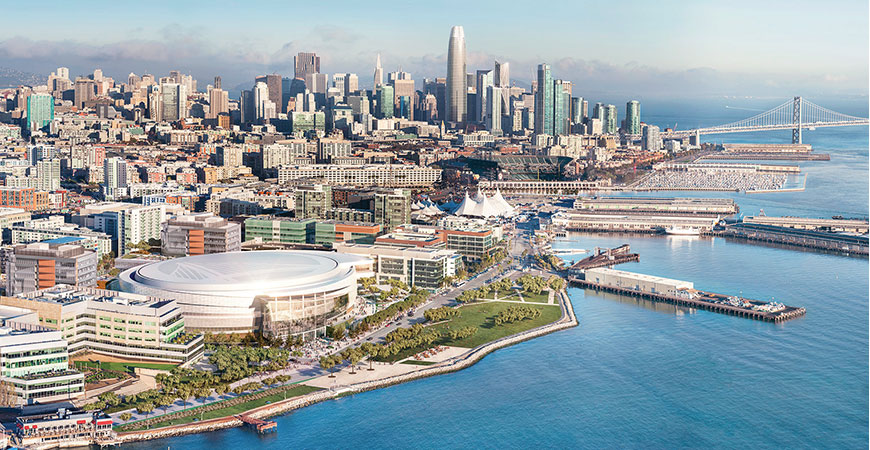 The Golden State Warriors announced earlier this year that the team plans to build a 142-room hotel with 24 upper-floor market rate condominiums near the team’s new arena at South Street and Terry A. Francois Blvd. The Chase Center area includes 11 acres surrounding the arena from Third Street to South Street to Terry Francois Boulevard to 16th Street. The project would be 160-feet tall—the current height limit for Mission Bay buildings.

The San Francisco Business Times reported that Starwood Capital Group affiliate SH Hotels and Resorts would operate the hotel, which would be staffed by UNITE HERE Local 2 members. The team had pledged to employ union hotel workers at their arena when the Warriors in 2014 announced their move to San Francisco from Oakland.

Warriors spokesman PJ Johnston said the hotel project “will fulfill a current need in the Mission Bay neighborhood for a hotel. The hotel will increase the tax increment of the Mission Bay plan, increase affordable housing fees, and will create new Local 2 union jobs.” A 250-room Marriot hotel under construction at Third and Channel Streets is the only other hotel in Mission Bay, and is expected to open in 2021.

The Potrero View news site noted that, “The Warriors’ quest for a hotel on the site isn’t surprising. While cities—including Sacramento, with the Golden 1 Center—have publicly financed new arenas to spur economic development in depressed areas, sports teams have also sought to invest in surrounding neighborhoods as a means to generate revenues.” Those revenues would help the Warriors recoup some of the over $1 billion the team spent on the privately funded arena project.

The Warriors’ original plan to build a 24,000-square foot retail building at the site was approved as part of Chase Center construction. The new proposal will need to be approved by the Office of Community Investment and Infrastructure, the successor agency to the San Francisco Redevelopment Agency terminated in 2012. Johnston said once the project is approved, construction of the hotel could begin in 2021 and be completed by 2023.