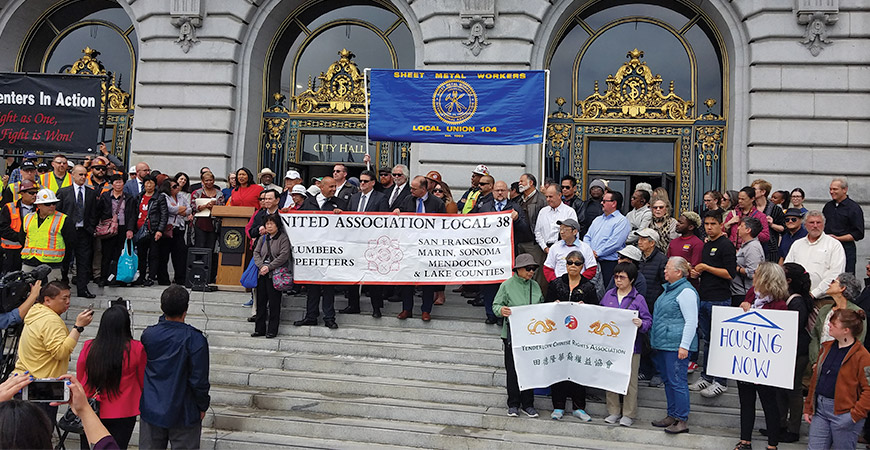 After a rally at City Hall July 9 attended by dozens of San Francisco Building Trades union members, the Board of Supervisors voted unanimously to place a $600 million Affordable Housing Bond Measure on the November ballot.

The Bond Measure won the support of the San Francisco Building and Construction Trades Council (SFBCTC) in June after SFBCTC President Larry Mazzola, Jr. and Secretary-Treasurer Tim Paulson met with Mayor Breed and her team and reached an agreement on Labor protections in the Bond. While the projects will not be covered by the city-wide project labor agreement between the City and the Building Trades, the SFBCTC won assurances from the Mayor that will ensure building trades workers will be well represented on the projects.

“The City has resumed bargaining with the Trades to finalize the City Wide PLA language, and has assured us that this will happen before the deadline in the Ordinance,” Mazzola said. “The Building Trades Council has agreed to back this much needed housing bond.”

One requirement of the SFBCTC for the affordable housing bond is that contractors on the various projects will be required to ensure that they are using certified apprenticeship programs.

In 2015, voters passed a $310 million affordable housing bond that was endorsed by the SFBCTC. Mazzola noted that, “The last housing bond in 2015 was done with 98 percent building trades union workers, and the goal is that this bond will be no different. In fact, the City agreed to use the State language on ‘skilled and trained workforce’ apprenticeship language to ensure a trained workforce for the projects.”

If passed in November of this year, the bond measure will fund the creation, preservation and rehabilitation of affordable housing. Funding from the Bond would enable approximately 2,800 units of affordable housing to start construction in the next four years. These projects would serve vulnerable residents, including seniors, formerly homeless individuals, veterans, families and educators. Funding would also expand the pipeline for new housing projects, especially for 100 percent supportive housing projects, fund the rehabilitation of public housing units and support new housing opportunities for middle-income residents.

At the rally that featured City leaders, housing activists, building trades unions and community groups, Breed said, “We know we need to do something big. We needed to come together. We’re here united to make sure that voters pass this bond in November!”

Supervisor Yee praised his colleagues for unanimously supporting the measure, but said, more work still needs to be done to make San Francisco more affordable for lower and middle income residents. “If we want to keep our workforce and new families in San Francisco, we must do more to support these residents, too,” he said. “The need will continue to be there after this bond.”

“We are in a housing crisis that is pushing out our low- and middle-income residents and we desperately need more affordable housing,” said Mayor Breed in a statement after the vote. “This Bond will allow us to create more affordable homes for seniors, continue rebuilding our public housing throughout the City, begin construction on projects for low-income residents that are ready to be built today, and keep current tenants housed. Building more housing requires a wide range of solutions, and this Bond is a key part of that effort.”

“This Bond is a reflection of what is possible when we work together collaboratively. I am hopeful that the voters of San Francisco will agree overwhelmingly that affordable housing is a public need and that this Bond is worthy of their support,” said Board President Norman Yee. “I look forward to ongoing discussions to ensure that we continue this momentum and increase our local investments to housing where the Federal government has fallen short. With this funding, we will be able to preserve existing housing and bring nearly 2,800 units online. I am also proud to see that this Bond is comprehensive in addressing households across the income spectrum and is dedicating funding to address the growing crisis that our City’s senior population is facing.”

The Working Group convened by Breed and Yee that included developers, community activists, and affordable housing advocates made recommendations for how the Bond funds would be spent. It called for $150 million to be used to repair and rebuild distressed public housing – including at Potrero Hill and Sunnydale that will result in 550 rehabbed units and 415 newly built units – and $220 million to complete the construction, acquisition and rehabilitation of permanently affordable, shovel-ready rental projects that will begin construction within four years. These projects would serve individuals and families earning from zero to 80 percent of the Area Median Income (AMI).

Additionally, approximately $30 million would go towards acquisition and rehabilitation of rental housing at risk of losing affordability — to help low- to middle-income households earning between 30 and 120 percent of AMI stay in their affordable apartments. Another $20 million would fund the creation of new affordable housing opportunities for households earning between 80 and 175 percent of AMI, as well as educators with down payment assistance loans, and the purchase of building or lands for new affordable construction.

The bond would earmark $90 million for new construction and acquisition of affordable senior rental housing. The bond funds would help affordable housing projects in the pipeline for the Mission neighborhood, including 681 Florida St. and 1515 South Van Ness Ave.

The Board of Supervisors will take a second vote on July 16 before the Bond is officially placed on the November 2019 ballot. The bond measure requires a two-thirds super-majority to pass.