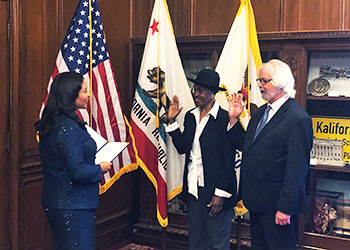 SFBCTC Secretary-Treasurer Named to Influential Board

Mayor London Breed appointed San Francisco Building and Construction Trades Council Secretary-Treasurer Tim Paulson and former District 10 Supervisor Sophie Maxwell to the San Francisco Public Utilities Commission (SFPUC) in late April. Both were unanimously approved by the Board of Supervisors. The SFPUC is governed by a board compromised of five commissioners with each chosen according to criteria set forth in the San Francisco City Charter – including one seat for a representative of organized labor. The commissioners provide operational oversight in such areas as rates and charges for services, approval of contracts and organization policy.

“I am honored to be appointed by Mayor Breed on this vital commission and look forward to serving the residents, workers, and businesses who expect our water, sewer and electrical infrastructure to be maintained with services delivered at affordable rates,” Paulson said.

Paulson is in his first year as SFBCTC Secretary-Treasurer, and until recently was Executive Director of the San Francisco Labor Council.

“In many ways this is the most important commission dealing with infrastructure in the city,” Paulson said. “It is extremely important to have labor represented on the commission to continue to manage that public infrastructure and advocate for workforce development, apprenticeship opportunities, and local hiring on the many projects the SFPUC is developing.”

Mayor Breed said she was proud to appoint Maxwell and Paulson to the SFPUC, noting that, “The success of CleanPowerSF has laid the groundwork for potentially acquiring PG&E assets, and I am confident that their leadership will help the City decide on our best path moving forward to provide power for our businesses and residents.”

“I am honored to have this opportunity to bring my advocacy for environmental justice and clean energy to the Public Utilities Commission,” said Maxwell. “I look forward to serving the people of San Francisco in these critical times.” A former union electrician, Maxwell served three terms on the San Francisco Board of Supervisors, representing District 10. During her tenure, she worked for more equitable distribution of public resources, increasing economic development opportunities for all San Franciscans and empowering the City’s most vulnerable residents. She was an early and strong advocate for CityBuild, the pre-apprenticeship program that has successfully placed dozens of San Francisco residents in union apprenticeship programs and good paying union construction jobs. She continues to advocate for environmental justice, clean energy, and children’s health and educational programs.

“Commissioners Maxwell and Paulson both have a long and special history of advocating on the behalf of San Francisco residents,” said SFPUC General Manager Harlan L. Kelly, Jr. “I know they will be responsive public servants who will work collaboratively to advance the mission of the SFPUC and the interests of all San Franciscans. I look forward to working closely with them on the critical issues facing our agency.”

The SFPUC delivers drinking water to 2.7 million people in the San Francisco Bay Area, collects and treats wastewater for the City and County of San Francisco, and generates clean power for municipal buildings, residents and businesses. The agency’s mission is to provide customers with high quality, efficient and reliable water, power, and sewer services in a manner that values environmental and community interests and sustains the resources entrusted to its care.

On Paulson’s first day on the job, he served as master of ceremonies for the celebration of the completion of the Calaveras Dam project in Sunol. The project is part of the SFPUC’s Water System Improvement Project that seismically upgraded pipelines, dams, reservoirs and other infrastructure that delivers water to the Bay Area from the Hetch-Hetchy reservoir. “The project was done under a project labor agreement, with union construction workers and union engineers and designers represented by IFPTE [the International Federation of Professional and Technical Employees, Local 21],” Paulson said. “It is the largest dam project in the United States.”

The SFPUC reported last year that $450 million in wages had been paid for the WSIP work since 2007, with half of the 12,000 workers residents of SFPUC’s service area, and 70 percent of apprentice hours worked by SFPUC service area residents. The success of the PLA led the SFPUC to extend and expand it to cover its ongoing Sewer System Improvement Program — a multi-billion dollar, 20-year capital investment program that will build a healthier, more reliable and seismically-resilient sewer system in San Francisco.

Paulson will step down from his position on the joint administrative committee that oversees construction contracts in the city. He said a representative from organized labor will replace him on the committee.