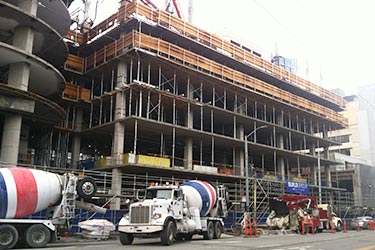 The development at 1,500 Mission is part of a greater redevelopment of the area around Market Street and South Van Ness Avenue. - Photo by Paul Burton

Development Activity in High Gear at Market and Van Ness

The area around Market Street and South Van Ness Avenue is set to become the center of the next construction boom in San Francisco. As many as 2,000 units of housing are in the planning pipeline to be built over the next few years or are currently under construction.

Developer Related Companies began construction on a massive mixed-use project at the former Goodwill store site at South Van Ness and Mission Street in June. Union contractor BuildGroup is the general contractor for the 1500 Mission project.

The development includes a 39-story, 396 foot tall tower with mid-rise podium that will feature 560 residential units. Twenty percent, or 112 residences on site, will be available at below market rate to people earning a maximum of 50 percent of the average median income. The residential tower will also feature 50,000 square feet of ground floor retail space. A second component of the project is a 16- story, 238-foot tall office tower on 11th Street, a block east of South Van Ness between Market and Mission Streets, with mid-rise elements extending west and south from the tower. It will be the home for a permit center to be occupied by several City and County of San Francisco departments that will be relocated from 30 Van Ness.

Crews are currently pouring concrete for the 11th floor of the tower and mid-rise components along Mission Street. Construction will take approximately 24 months, with the 1.2 million square foot project designed by Architects SOM and HKS expected to open in 2020. Related California is also the developer for projects at Transbay Block 8 and 1601 Mariposa.

Other projects in the works or under construction in the area include new housing at One Oak (on Van Ness and Market at the site currently occupied by a Honda dealership), 1554 Market, 150 Van Ness, 30 Van Ness, 10 Van Ness and the Civic Center Hotel.

At corner of Van Ness and Market, 30 Van Ness is currently the site of a Walgreen’s and the City’s Department of Public Works. Developer Lendlease bought the property from the City for $70 million last year. The San Francisco Business Times reported that the sale of the City-owned 30 Van Ness, “Will help the city repay $32 million of debt on the building and help finance construction of 450,000 square feet of city offices that will be part of a mixed-use development on the nearby Goodwill site.”

Lendlease is currently in preconstruction for the project that will raze the existing 30 Van Ness building to make way for a 40-story, 520-foot-tall tower with 562 residential units, 25 percent of which would be priced below market rate. The mixed-use development will also include 14,900 square feet of retail spaces and six floors of office space, topped by the residential units.

Number of stories for 1500 Mission

The San Francisco Planning Commission approved San Francisco-based developer BUILD Inc.’s One Oak project at the Northwest corner of Market Street and Van Ness in June 2017. The 40-story tower will have 304 luxury condominium units and 136 below-ground parking spaces. While the project does not include below market rate units, the developer paid $6.4 million in fees to the City that will fund construction of 72 permanently affordable units to be built on Octavia Boulevard within 0.3 miles of the One Oak project, as part of an agreement with the Mayor’s Office of Housing.

One Oak was originally called One Van Ness; the site currently includes a parking lot between Market and Oak Streets and a doughnut shop at the corner of Market and Van Ness. The project has been in the works for about 10 years; BUILD took over the project in mid-2014 and redesigned the tower the following year to lessen the effects of wind and create more common space for residents. SCB Architects and Snøhetta Design are the architects for the project.

Union contractor Suffolk Construction has been involved in the pre-construction planning and will likely be the general contractor for the project that is estimated to be completed by mid-2021.

Florida-based developer Crescent Heights plans to build two 400-foot residential towers with one million square feet of space at the site of the Honda Dealership on the Southwest corner of Van Ness and Market. Crescent Heights purchased the site in May 2014 for $58 million. The project will also include 30,000 square feet of cafes, restaurants, ground-floor retail and a below-grade parking garage. Crescent Heights was the developer for the 45 Lansing and 1401 Mission residential projects that were built by union construction workers.

The development plan is still in the early stages and hasn’t yet to gone through the environmental review process. It also could be modified, as the developer noted that, “In 2015, the City initiated an effort to reevaluate the zoning at Market Street and Van Ness Avenue. Owners in the area were asked to consider alternative urban forms to achieve the policy goals of increased housing, affordability and inclusive public spaces. In addition to the two-tower, code-compliant project described above, the current proposal includes a second option: a taller, single tower building that responds to the City’s objectives.”

Crescent Heights touts the project as one that will provide new sustainable and affordable homes to support varied-income residents. The project will also create a substantial number of new jobs during and after construction through operations, maintenance, and retail services.