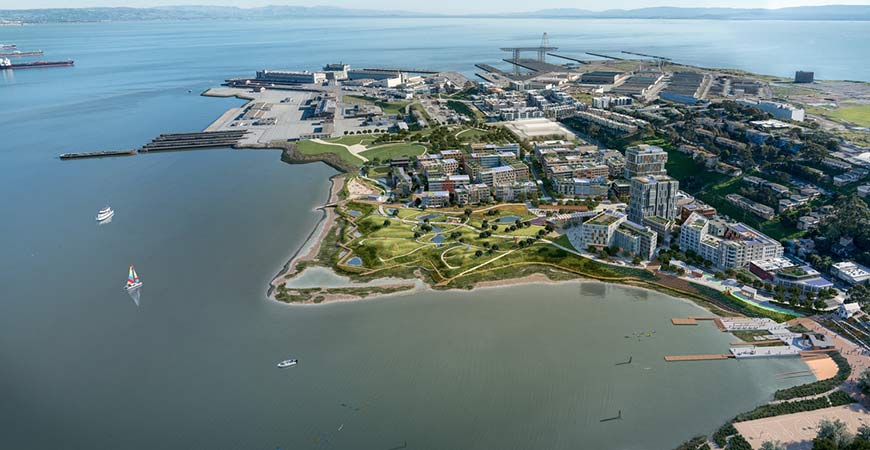 The San Francisco Board of Supervisors approved BUILD, Inc’s India Basin mixed use project, located along the San Francisco Bay between the PG&E Power Plant site and Hunters Point Shipyard.

Board of Supervisors Approve 29-Acre Project 10-1

BUILD plans to redevelop approximately 29.26 acres of privately and publicly owned parcels along the shoreline to create a mixed-use “urban village” and a new publicly accessible network of parkland and open space. The mixed-use neighborhood to be built on 30 parcels around Innes Avenue will include 209,000 square feet of commercial space, a 5.62 acre park along the shoreline, and 1,575 apartments and townhomes — including 394 units of affordable housing.

The San Francisco Building and Construction Trades Council supports the project and is negotiating a project labor agreement with the developer to ensure good paying jobs and benefits for construction workers. BUILD recently signed a letter of intent to have a PLA for the project.

The San Francisco Planning Department has been working on a plan for India Basin since 2010. BUILD acquired the property in December 2013. The master plan designed by architects Skidmore, Owings & Merrill in collaboration with Bionic Landscape Architects and Gehl Studios also includes 1,575 bicycle spaces and 1,800 vehicle parking spaces. According to the developer, BUILD is also exploring increasing the amount of commercial space.

Responding to neighbors who spoke against the project and expressed concerns about dust being stirred up during construction, Supervisor Malia Cohen, who represents the Bayview District, said she understands the concerns about development and environmental injustices. She acknowledged that the City needs to do more to protect public health, in light of revelations about falsified reports about the clean-up of the nearby Hunters Point Shipyard, but voted to approve the project.

“The project will undoubtedly be a benefit to the community,” Cohen said. “Not only does it provide a beautiful space for residents, but it also gives us an opportunity to show what a thoughtful project looks like.” The project was approved 10-1, with Supervisor Sandra Lee Fewer voting against the plan.

The San Francisco Recreation and Parks Department is a co–project sponsor for the development that will improve eight acres of publicly owned parcels along the shoreline and 1.58 acres of unimproved streets to create a publicly accessible network of parkland and open space. A new shoreline network would extend the San Francisco Bay Trail to connect The Embarcadero to the north of India Basin to Candlestick Point to the south, with pedestrian and bicycle connections to and along the shoreline.

The Planning Department recommended approval of the India Basin development because it “will help fulfill several Planning efforts, including the Bayview Hunters Point Community Revitalization Concept Plan, the Draft India Basin Subarea Plan, [and] the India Basin Neighborhood Association Vision Plan, among others.”

According to BUILD, the site has the potential to be developed with more commercial space in response to market demands, and attract the private investment. Along with commercial units and housing units, India Basin would also include community job training and small business development opportunities and public transportation infrastructure improvements. The developer plans to use green building design and construction practices and incorporate environmental sustainability, including using storm water treatment bio-swales and bio-retention areas, and restored wetlands.

Once plans are finalized, construction on the multi-year development would begin in early 2020.