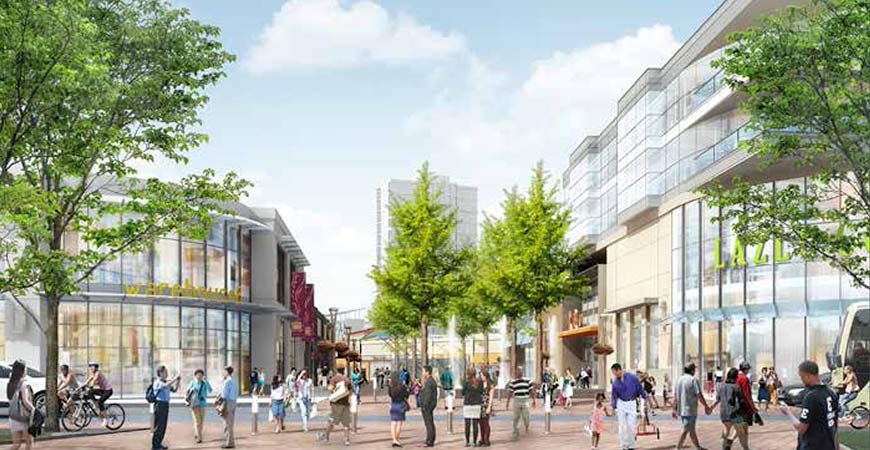 When plans were first put forward for the redevelopment of Candlestick Point and Hunters Point, developers assumed the San Francisco 49ers would still be in the city. Low density housing and retail space is now planned for where the stadium was. - Courtesy Image

Nadia Sesay, Executive Director of the Office of Community Investment and Infrastructure, presented information on amendments to Candlestick Point and Hunters Point Shipyard Phase 2. She said there are two redevelopment plans that overlap – Phase 1 with Lennar at the Shipyard site, and Phase 2 that includes the rest of the shipyard site and Candlestick Point with developer Five Point. Sesay said when plans were first approved in 1997 and 2010, developers assumed the San Francisco 49ers would still be in the city. The changes to the plans call for more housing for the Candlestick Point area – specifically at the site of Candlestick Park. Low density housing and retail space is now planned for where the stadium was, next to other areas with housing.

Sesay said the plan was changed to respond to market conditions and maximize use of land. The Shipyard Phase 2 plan now has a greater mix of uses with housing, commercial and open space, as well as artist spaces.

“The new vision requires changes to the redevelopment plan,” she said.

This “new vision” lowers the amount of office space and allows for more flexibility within Candlestick Point and the Hunters Point Shipyard Phase 2, she said. The square footage initially set for office space will be reallocated to hotel, retail and institutional use (such as a new high school).

Sesay said the number of housing units remains unchanged. The projects will yield over 10,500 housing units, with a mix of housing levels with 32 percent affordable at below market rate. The amendments would let a modest amount of office space shift to the Candlestick Point side of the project.

The amendments would also allow the developer to work on a sustainable energy “Eco-grid” and Eco-district with plans for the future that could lead to a green energy program including solar energy and battery storage, recycled water treatment facilities and geothermal heating and cooling.

“The transfer of land from the Navy has not been definitively determined, but we have land certainty for Candlestick Point,” Sesay said.

Supervisor Malia Cohen, who represents the Hunters Point area, noted that the discussion is happening “during ongoing fraudulent soils testing scandals going on at Hunters Point Shipyard by a clean up contractor, Tetra Tech.” According to a U.S. Environmental Protection Agency review, employees of the Navy’s subcontractor Tetra Tech falsified reports on the presence of hazardous materials in the soils and falsely certified the area was cleaned up.

“As an outcome of the May 14 Government Oversight Committee hearing I called, the California Department of Public Health has agreed to test Parcel A for contamination and all of Parcel G,” Cohen said. “Of course, this will be paid for by the US Navy.”

Cohen said while the clean-up is ongoing, “the work we are doing today will allow the developer to get entitlements to do pre-development work. We as a city will remain vigilant about the safety of the workers, the residents at the Shipyard, and the residents around the Shipyard. We will not move forward with any development until we are sure the soil is safe.”

During the public comment period of the June 26 meeting, a few residents expressed concerns about radioactive contamination. Michael Boyd of Californians for Clean Energy said he remains concerned about the risk to current residents.

“More environmental work needs to be done,” Boyd said. “The previous Environmental Impact Report was not adequate in light of the testing scandal.”

Gloria Berry, former Navy member, said she is concerned about contamination, saying the Navy assured the clean up would be done 10 years ago. She noted that District 10 has the highest rates of cancer and asthma in San Francisco.

“This project is the economic engine of Bayview-Hunters Point and has exceeded every mandate it was supposed to carry out,” resident and activist Linda Richardson said.

Ellouise Patton, chair of the BVHP Citizens Advisory Committee, said, “All of us want the soil to be clean and residents to be safe. Nothing can get done until these amendments are passed so work can get started.”

San Francisco Building and Construction Trades Secretary-Treasurer Michael Theriault said he had been following the project for 13 years.

“We share everyone’s disappointment in the Navy and its contractors in not achieving an adequate clean-up of this site,” Theriault said, “Not just on behalf of the neighborhood and the site’s eventual occupants, but of our own members who are already working out there and who we hope to have working out there in greater numbers in the not too distant future. When that clean up is done – and we have faith it will be done – we do need a plan in place for the site. The plan before you allows for a street grid that will allow for the adaptive re-use of existing buildings. It will allow for greater economic possibilities for our members and for long-term employment.”

SFBCTC Business Manager Tim Paulson noted that, “It has been 10 years since this body moved this project forward, when I was San Francisco Labor Council Executive Director and we negotiated a community benefits agreement that included for the first time 35 percent affordable housing. We are proud of the work this body and our labor unions did. Here we are 10 years later. We support the amendments because things have changed, such as the 49ers leaving. Also, we are extremely disappointed in the clean up process and are absolutely supportive of that being taken care of and that the Navy does pay to get this done correctly.”

“It is a great opportunity to put a lot of people to work, and of course we want to clean up this area,” Morgan said. “The developers and unions have put a lot of community members to work.”

Dr. Veronica Hunnicutt, chair of the BVHP CAC, pointed out that the project also includes a new high school focused on science, technology, engineering, and math, as well as senior housing, more parks and open space. “One third of entire project [will be] affordable,” she said. “Soil will be re-tested; we need to move this project forward.”

The amended project received approvals from the HPS Citizens Advisory Committee, Office of Community Investment and Infrastructure Commission, and the Planning Commission in April and from the MTA Board and Oversight Board in May. The State Lands Commission approved changes to heights in June, with a second approval expected in August.