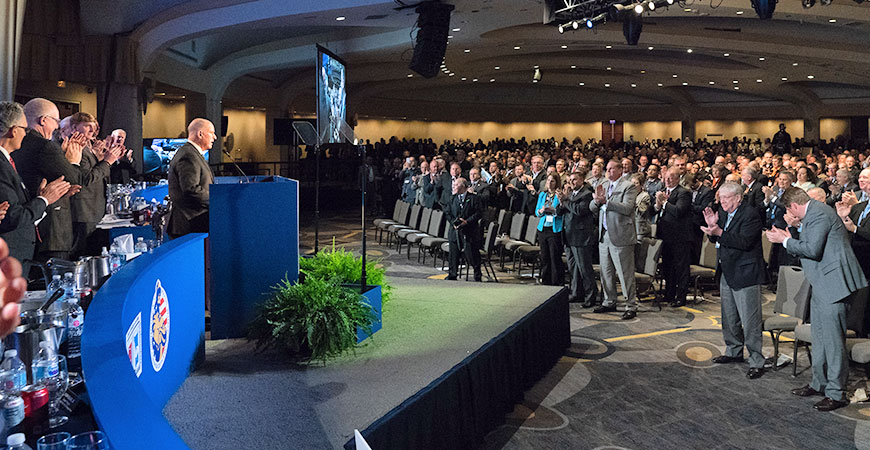 "This year we are renewing our call for investment in, and new partnerships for, robust infrastructure investments – both public and private," McGarvey said in his keynote speech. "The conference theme, 'Our Money at Work: Rebuilding America's Public and Private Infrastructure with Building Trades Capital,' underscores our solution-oriented approach and highlights our leadership role in the infrastructure discussion and debate."

On the topic of infrastructure, McGarvey didn't mince words, noting that the American Society of Civil Engineers recently gave the nation's infrastructure a D+ rating.

"[The building trades] have been hard at work in advocating for a comprehensive infrastructure proposal that will be broad, robust, include standards, promote efficiency and be sustainable in the long term."

"I wonder how much more time we actually have to wait in traffic, or in airport delays, for safe drinking water, for safe bridges, for a smart and secure 21st-century energy grid, for schools to get heat in the winter, for commercial or industrial energy efficiency, for rural broadband, for extreme weather resiliency, or for world-class ports?" McGarvey asked rhetorically. "How much longer must we wait? Regardless of your perspective or political affiliation, I don't think anyone wants to make America third-RATE again."

McGarvey lauded the building trades for efforts made since last year's conference to turn things around.

"[The building trades] have been hard at work in advocating for a comprehensive infrastructure proposal that will be broad, robust, include standards, promote efficiency and be sustainable in the long term. To help amplify this message we launched a project called ReBuild USA that will help our members and the general public engage with lawmakers to ensure this is a top national priority," he said.

McGarvey also encouraged conference delegates in discussions with members of Congress to "truly prioritize this bipartisan issue and find the will to actually get something done."

San Francisco Building Trades members met with Senator Dianne Feinstein on Capitol Hill during the conference and raised concerns about homelessness, housing and a host of other issues.

McGarvey commented that Congress seemed to lack the will to deal with infrastructure or stabilizing pension funds, instead passing "a massive corporate tax cut that was not offset by other cuts or fully paid for." He put some of the onus on the building trades, saying they have a responsibility to help finance infrastructure and energy projects with pension assets, train current and future members to meet industry demands and work with project sponsors, non-profits, community partners and educational institutions to provide career pathways for underserved communities. McGarvey also highlighted apprenticeship readiness programs and apprentices earning union wages and benefits. He went on to say that the building trades would continue to make organizing "job number one" and that a commitment to craft training, industry partnerships and a bipartisan approach to politics "has resulted in steady growth in market share and membership gains in the Building Trades since the economic collapse of 2008. In fact, we have collectively gained more than 300,000 new members."

Finally, McGarvey delivered a final motivational message to inspire optimism in his audience.

"Together, we can effectively bring an end to the 'race to the bottom' that has devastated countless American workers and their families and left them with little hope or led them to fall victim to the growing opioid epidemic gripping the nation," he said. "Together, we can protect prevailing wage standards, promote fair contracting, and expand the use of project labor agreements. We are ready to leverage our partnerships to empower our members, and to empower North America's Building Trades Unions."

Brown then sang the praises of the state's under construction high-speed rail system. "We build it; it's 100 percent union labor and it's American products," he said to cheers and a standing ovation from conference attendees. "Right now there are thousands of new apprentices and people working on that railroad in Fresno and the Central Valley, and there are people who want to stop it. They like tax breaks. They use them to invest in multi-national companies all over the world... bring in goods from around the world and destroy American jobs. We invest in rails, in tunnels, in roads and aqueducts, in new electricity grids. It's all American; in California it's all labor, trades, prevailing rates, skilled labor—that's what we can do, and we'll keep doing it."

Brown also derided right-wing media coverage going back decades that criticized his economic vision as Governor, supplying statistics that paint a picture of a prospering California.

"Business and labor together have created almost 3 million jobs. The wealth in California is close to three quarters of a trillion. The media, Fox news, the right wing complain about California [saying] you can't grow. They said that in 1975, that California can't grow because of Brown, because of regulations, the environment. In 1975 California had a gross domestic product of $350 billion. This year it was $2.6 trillion. That's growth."

Brown also took shots at the Republican-controlled Congress, saying "[their] biggest win is a tax break that's giving tens of billions of dollars to the richest corporations in America, who already have more money than they know what to do with so they are giving it back to their stockholders instead of investing in new power plants, new roads, new buildings dams or tunnels. … Now we've got a trillion dollar deficit for as far as the eye can see, and they say now we can't afford things – now we have to cut college aid… we have the money. This is a very powerful country, and when you build and you put people to work, and you train people, you create more wealth – that's the way it works, that's the way it's working in California."

On the subject of NAFTA (which Brown opposed as a presidential candidate in 1992), Brown expressed his tepid support.

"Let's have trade with Mexico and Canada, but let's have good wage protections and job protections. A lot of this stuff [trade deals] isn't about trade – it's about renting cheap workers in foreign countries to make American products without Americans. That's crazy. We've got to stop that. Democrat or Republican, you've got to put American workers first—that's who we've got to put first. I'm not trying to talk about that other guy; he has a crazy America first. The workers first."

Highlighting that regulations can benefit the environment and job creation, Brown said, "In our program of cap and trade, where we require polluters to pay … we are generating $7 billion in public funds. 25 percent goes to high-speed rail. A lot of it goes to affordable housing – we are building stuff. We are making things happen, and we have the money. We are not taking directions from the White House; we're taking directions from you." This elicited Brown's second standing ovation.