Bay Area Legislators Have Labor’s Back 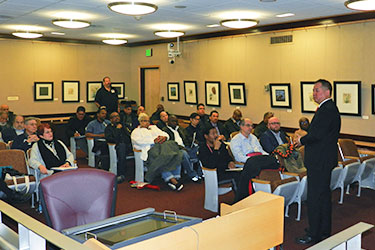 Assemblymember Phil Ting addressed a contingent of representatives from the building trades and public and private sector unions at the Joint Legislative Conference in Sacramento in March.

On March 20, the San Francisco Building and Construction Trades Council (SFBCTC) and the San Francisco Labor Council held a series of meetings with Bay Area legislators in Sacramento as part of the Joint Legislative Conference, which was sponsored by the California Labor Federation along with the SFBCTC.

At the meetings, representatives from the building trades and public and private sector unions asked Assemblymembers Phil Ting and Marc Berman and State Senator Jerry Hill to support labor-backed bills. State Senator Scott Wiener was unable to attend the meeting as he chaired a committee hearing. Assemblymembers Kevin Mullin and David Chiu were also unable to attend. However, in 2017’s legislative session, Wiener, Mullin and Chiu all earned 100 percent pro-labor voting records.

Labor is backing bills that would ensure public funds and subsidies, promote good jobs, protect vulnerable workers from sexual harassment and address the impact of automation on jobs. Other issues on the docket included corralling health care costs, dealing with the housing crisis and strengthening unions.

Chiu’s Chief of Staff Judson True did take time to meet with labor representatives in Sacramento for discussions on Chiu’s positions regarding labor-backed bills. True reiterated that Chiu’s support of Labor is unwavering.

“[Chiu] is strongly committed to labor and has a great working relationship with labor leaders and union members,” he said.

True also mentioned that Assemblymember Chiu’s agenda is focused on housing, including streamlining construction responsibly and putting allocating significant funding for housing. On the labor-backed bills, True said he didn’t see anything in the package that Chiu wouldn’t support.

Labor also has reason to be optimistic about Assemblymember Ting, who voiced his support for pro-labor causes during the 2017 session, referring to the labor movement as “crucial to equalize the economy.”

A year ago, he also said: “The income gap is getting bigger; we need unions and to fight for unions.” Ting, who has said he doesn’t state a position on bills before they have gone through committees and reached their final version, has also said that he supports Labor’s bills in concept.

State Senator Wiener’s Communications Director, Jeff Cretan, told Organized Labor that Wiener hasn’t had time to review the bills yet, as many are Assembly bills and won’t be coming to the State Senate for a few months. “Obviously he continues to be supportive of the San Francisco Building Trades Council and the great work it does representing workers, but he can’t comment on these specific proposals until he has reviewed them,” Cretan said.

Senator Scott Wiener is sponsoring several bills that would impact the building trades. His Transit Zoning Bill (SB 827) creates density and height zoning minimums in transit-rich areas that can accommodate more housing. SB 1399 would expand solar sites in California and increase clean local energy and SB 829 creates a by-right process where farm owners and operators can dedicate agricultural land for employee housing to address the shortage of farm worker housing in California.

AB 3222 closes a loophole in state law by requiring charter schools receiving public funding to pay construction workers the prevailing wage and therefore attract the most competent and skilled local workforce to build all public education facilities. Ting said he has been a supporter of prevailing wage and that is “a way of life” in San Francisco. Chiu’s Chief of Staff Judson True said, “I fully expect [Chiu] to support it. We fought for prevailing wages in the housing bills, along with the building trades.” Berman, Hill and Weiner also voiced their support.

AB 3018 would apply strong enforcement provisions to protect apprentices and the entire workforce. The bill would establish strong incentives for compliance by contractors and the subcontractors they hire. State Senator Hill said he strongly supports apprenticeship programs and strong enforcement measures. “We need enforcement because the programs deal with the health and safety of the workers.” Ting said. “Building trades apprenticeship programs are critical because you get a guaranteed standard of work.”

Other labor bills and issues

The Labor Federation and Building Trades support a single payer health care system, noting that to achieve it, we must control the skyrocketing cost of health care for purchasers and patients. Labor will push for policies that contain costs, improve quality and reduce health disparities for our members and all Californians.

SB 1470 would create a commission on technology, automation and the future of jobs that includes workers’ voices that would ultimately make policy recommendations. SB 1470 would help protect workers like truck drivers and warehouse workers from massive job losses by informing how to properly use public funds, handle mass displacement and what restrictions are needed for public and worker safety.

For generations, the American auto industry helped grow the middle class. The electric vehicle industry has the opportunity to do the same. State taxpayers are subsidizing the purchase of these cars, but companies that want public funding don’t yet have to show they are fair and responsible employers.

Other bills on the State Building Trades Council 2018 Legislative Agenda include:

David Chiu’s AB 2923 would authorize the BART Board to adopt a permit streamlining process for transit-oriented residential developments with an affordable housing requirement. The bill would also require the use of a project stabilization agreement. The bill would cover an estimated $2 billion in construction projects.

SB 632 would protect individuals with “substantial medical doubt of their survival beyond six months” due to mesothelioma and silicosis stemming from prolonged civil discovery sessions. The bill would limit depositions to seven hours.

SB 825 would improve and enhance existing pre-apprenticeship programs in state prisons in partnership with the State Building Trades. The bill would require the programs adhere to the Multi-Craft Core Curriculum (MC3) in conjunction with a community workforce agreement/PLA with the California Department of Corrections and Rehabilitation.

SB 1223 establishes an advisory committee of Building Trades’ union representatives, contractors, state representatives. The proposed committee would develop an industry-specific harassment and discrimination prevention policy and training standard for construction employers to use.

AB 2031 permanently extends prequalification requirements for projects awarded by local school districts that are funded in whole or in part by the state’s School Facilities Construction Program.