A Healthy Dose of Development 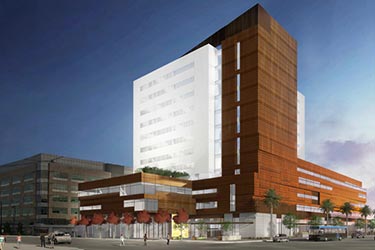 The UCSF Center for Neuroscience is planned for an underutilized parcel at Third and 16th streets on UCSF's Mission Bay campus. - Image courtesy UCSF

Adding to robust development in the city's Eastern neighborhoods, the University of California San Francisco currently has four major projects under construction in Mission Bay and Dogpatch. Groundbreaking took place last April for the Precision Cancer Medicine Building that's slated to begin treatment of patients in 2019. A month later, the Joan and Sanford I. Weill Neurosciences Building and the Minnesota Street Graduate Student and Trainee Housing projects were approved by the University's Board of Regents; and the Center for Vision Neuroscience was approved in February.

General contractor Rudolph & Sletten Inc., working with designer Stantec Architecture, is in the process of delivering this new center geared to be at the forefront of adult outpatient cancer treatment, promising compassionate care, the most advanced technology and the latest treatment protocols. Upon completion, the PCMB will consolidate the Mount Zion and Mission Bay solid tumor practices into one location, fostering collaboration between researchers and physicians.

"Large groups of patients, families, clinicians, staff members, architects, clinical planners and community members met regularly for more than a year to explore what patients valued, how people wanted to work together, and how we could use this building to physically demonstrate this precise, patient-centered approach," says J. Stuart Eckblad, vice president of major capital projects, Integrated Center for Design & Construction at UCSF Health. "We are an integrated team, building a vision together."

Square feet of the Sanford I. Weill Neurosciences Building

Square feet of the Center for Vision Neuroscience

With many of UCSF's neuroscience facilities spread across several neighborhoods, the Weill Neurosciences Building will become a headquarters for related fields by uniting the University's Neurology, Psychiatry and Neurological Surgery departments. Located on Fourth Street between Gene Friend Way and Campus Way on the Mission Bay campus, the building is expected to be complete by 2020.

At six stories and 270,000 square feet, the new building will contribute to making UCSF's neuroscience complex one of the largest in the world, aimed at bolstering advancements in the treatment of brain and nervous system disorders. Building features include a central atrium with skylight, curated science displays, top floor terrace and an exterior low-iron glass curtainwall.

An underutilized parcel at Third and 16th Streets on UCSF's Mission Bay campus could get a 12-story tower by as early as July 2019. Webcor Builders is tackling the endeavor alongside architect SmithGroupJJR to deliver 340,000 square feet of space for research, educational and clinical functions in the field of vision neuroscience. In addition to the tower, the building will have a five-story south wing and a three-story north wing equipped with a rooftop garden.

According to literature from Webcor, the project is being delivered according to California's OSHPD 3 requirements with a best value design/build method based on design and performance criteria and lean construction principles.

UCSF's Mission Bay expansion has exceeded the contiguous campus boundaries, spilling into the nearby Dogpatch neighborhood. A student housing development on the recently purchased lots at 566, 590 and 600 Minnesota Street is being constructed by general contractor Skanska in response to San Francisco's costly rents. A recent study showed that current campus housing only supplies about 32 percent of demand.

The project consists of two separate six-story buildings, both of which are on sites at about 40,000 square feet. The space will provide 595 units including 385 efficiencies, 95 studio apartments and 115 two-bedroom apartments, as well as retail, community space and a parking garage with 127 spaces for University graduate students and trainees and their partners. Completion is estimated for 2019.